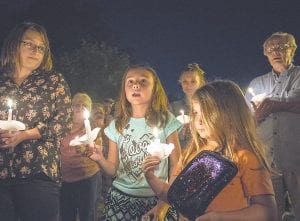 Carlie Anunson spoke during a candlelight vigil in Jenkins on Saturday in honor and support of missing Letcher County soldier Abigail Milam. Madison Duty, at right, also held a candle in support of Milam.

A massive ocean search for five soldiers — including one from Letcher County — who disappeared after a nighttime helicopter crash last week ended earlier this week after no signs of life were spotted among the debris.

Crews from the Army, Coast Guard, Navy and local agencies in Hawaii searched around the clock as strong currents moved the wreckage into a deep-water search area that spanned 72,000 nautical miles (115,873 kilometers).

“Our five soldiers who represent the best and the brightest of America have not been found,” said Maj. Gen. Christopher Cavoli, commander of the 25th Infantry Division.

Among the missing are Staff Sgt. Abigail R. Milam, 33, of Jenkins. She is the daughter of George Elkins of Jenkins and the late April Kay Elkins. She was a crew chief and had received the Army Achievement Medal and the Army Commendation Medal. 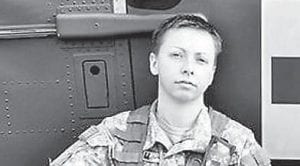 Pictured at left is Staff Sergeant Abigail R. Milam, one of five soldiers who is missing and feared dead after an Army helicopter crash somewhere off the Ka’ena Point in Hawaii (pictured below). (AP)

Army and Coast Guard officials on Monday notified the families of the missing soldiers that they were ending the search and rescue operation, Cavoli said.

“It is a very, very difficult decision, and it weighs heavily, particularly on the hearts of the Coast Guard,” said Rear Adm. Vincent B. Atkins, commander of the U.S. Coast Guard’s 14th District.

“We used all of our training and professionalism in this very dynamic environment to mount the best response possible,” Atkins added.

There has been no determination yet of the crash’s cause, Cavoli said after the search was suspended.

Two Black Hawk helicopter crews were conducting training off the western tip of Oahu the night of Aug. 15 when one aircrew lost contact with the crew whose helicopter went missing. 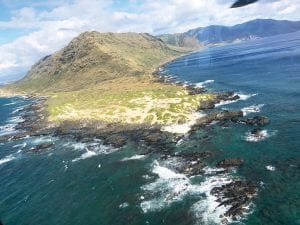 When the pilot on the lead helicopter realized the other aircraft was missing, he immediately turned his helicopter around and began to search, Cavoli said. But he later determined he didn’t have the equipment he needed to launch a professional search so he alerted the Coast Guard, Cavoli said.

A multi-agency team searched more than 72,000 nautical miles (115,873 kilometers) over the last week but saw no signs of life or of the crew that went missing. They found what appeared to be pieces of helicopter fuselage and a helmet in a debris field that expanded with strong currents to remote, deep areas of the ocean.

The Navy brought in remotely operated underwater vehicles and sonar to help in the search and get a better picture of the ocean floor, which drops quickly off the coast of Oahu and is over 1,000 feet (305 meters) deep in parts of the search area.

During the search, the Army and Coast Guard held joint briefings with family members every six hours to keep them informed, Cavoli said. 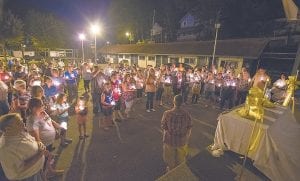 The fact that parts of the fuselage were found indicated the helicopter’s impact with the ocean was substantial, said Mario Vittone, a retired Coast Guardsman and expert on sea survival.

“There’s not a big record of people surviving impacts with the water when the impact is so significant that the fuselage is torn apart,” he said.

People can last about three days without water as long as they are not working very hard, but in the ocean it is difficult to get rest while trying to survive, Vittone said.

All five crew members on board had life vests, air bottles for underwater breathing and radios with built-in GPS systems, the Army has said.

“All these things lead you to believe they didn’t leave the aircraft, because if they could get out of the aircraft and inflate their floatation devices, then why would they not then turn on their beacons?” Vittone said.