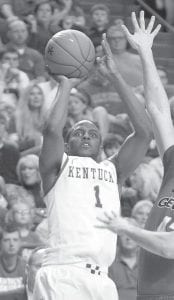 Senior Darius Miller expects No. 1 Kentucky to get even more production from its bench by the time the NCAA tournament starts. It’s just another sign of strength for a team that expects to play for the national championship next month.

“Hopefully our bench can step up big, give these guys a break when they need it. It’s going to be a long run, a long tournament — both of these two tournaments,” Miller said. “Hopefully we do our part just as well as they do.”

Miller was named the Southeastern Conference’s Sixth Man of the Year by the league’s coaches on Tuesday, one of many end of year accolades the Wildcats (30-1, 16-0) picked up Tuesday after they polished off the third undefeated season in league play in the last 56 years over the weekend.

Still, it’s been easy to compare the SEC lineup with power conferences like the Big East as a way of explaining Kentucky’s dominance in league play, but coach John Calipari says the league deserves more credit than it has gotten.

“Think about it, we had to go to Vandy. No one wins at Vandy. We had to go to Florida. They only lost one game there. We had to go to Tennessee and eek out a game. You’re talking about Mississippi State and they’re up 13 at the half,” said Calipari, who was picked as the SEC coach of the year by his colleagues. “We didn’t walk through the league. If Mississippi State plays like they did against us they’re a Sweet 16 team. Just go play that way. This league is solid top to bottom.”

A solid league that Kentucky won by six games. That puts the Wildcats in a familiar position — a heavy favorite in the SEC tournament beginning Thursday and one of the teams to watch in the NCAA tournament as they chase an eighth national title.

They’ve been bolstered by the likes of freshmen Anthony Davis and Michael Kidd-Gilchrist. Davis was tabbed SEC player of the year and defensive player of the year. He missed practice Tuesday because of a death in the family.

Davis has been so good that Calipari has been running practice without the 6-foot-10 forward on the first team in an effort to replicate a scenario where he might be in foul trouble.

Forward Terrence Jones, who was the SEC preseason player of the year, has been working in Davis’s position and Calipari is confident that Miller and freshman Kyle Wiltjer will provide meaningful minutes.

Miller is averaging 10 points per game this season, but has scored as many as 24 in a game in his career, while Wiltjer has gone 9 for 12 from 3-point range over the last five games he’s attempted at least one 3-point shot.

That’s helped the Wildcats be confident that they’ve minimized any weaknesses — including what some consider a lack of depth.

“They haven’t had games where they’ve been at all vulnerable, in my opinion. They have answers on all spots on the floor, both offensively and defensively,” Florida coach Billy Donovan said. “I think because of their chemistry or their disposition or their personalities, they are going after something that’s bigger than their own individual statistics, minutes, points, rebounds.”

Kidd-Gilchrist said it starts on defense. Kentucky leads the nation in field goal percentage defense and with 277 blocks so far is on pace to easily break the NCAA record of 315 set by Connecticut in 2004.