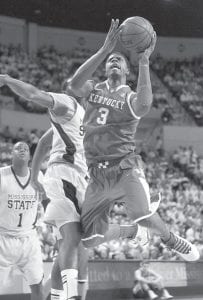 Kentucky forward Terrence Jones (3) got a shot past Mississippi State center Wendell Lewis (30) in the first half of a game UK came back to win in Starkville, Miss., on Tuesday night. (AP Photo/Rogelio V. Solis)

Compared to the rest of Kentucky’s roster, Darius Miller is a dinosaur.

But the 6-foot-8 senior guard does bring the Wildcats some experience and toughness, and he scored all of his 12 points in the final eight minutes to help No. 1 Kentucky climb out of a halftime hole to beat Mississippi State 73-64 on Tuesday night.

“I just tried to focus in,” Miller said of the Wildcats’ methodical second-half comeback. “I knew we were all going to have to make plays.”

Miller’s dominant stretch was punctuated by a 3-pointer with 1:27 remaining that gave the Wildcats an insurmountable 71-64 lead. The close game was a rare test for Kentucky (27-1, 13-0 Southeastern Conference), which has plowed through the conference schedule with relative ease.

The Wildcats (27-1, 13-0 Southeastern Conference) trailed 41-28 at halftime — which was their biggest deficit of the season — but slowly climbed back to take their first lead at 63-62 with 4:11 remaining on a layup by Kidd- Gilchrist. They never trailed again, winning their 19th straight game.

Kidd-Gilchrist scored 12 of his 18 points in the second half and also added 10 rebounds for the double-double. Kentucky finished the game on a 20-4 run.

Dee Bost led Mississippi State (19-9, 6-7) with 21 points while Arnett Moultrie added 13 points and 11 rebounds for his SEC-leading 16th double-double of the season. It was a bitter loss for the Bulldogs, who have lost four straight games.

“ There wasn’t an ounce an energy they brought back to the locker room,” Mississippi State coach Rick Stansbury said. “They left it all out on the floor.”

It was a tense game throughout with three technical fouls, including two for the Wildcats.

That wasn’t a surprise considering the recent competitive history. The programs have split the past six games in the series, and three went to overtime.

Mississippi State came into the game on a surprising three-game losing streak — falling to Georgia, Auburn and LSU — that has put its standing for an NCAA tournament at-large bid on shaky ground. And the Bulldogs played like a desperate team.

In front of a rowdy Humphrey Coliseum crowd, Mississippi State couldn’t have asked for a much better start. Renardo Sidney nailed a 3-pointer and Bost found Moultrie for an alley-oop to take a quick 5-0 lead. The Bulldogs stretched that advantage to 25-13 on Bost’s 3-pointer that danced around the rim before falling through the hoop.

While Mississippi State was cruising, Kentucky was uncharacteristically rattled.

The Wildcats couldn’t get the ball inside to their talented big men, instead settling for contested shots on the perimeter. Marquis Teague was called for a technical which Mississippi State turned into a five-point swing, with Bost making both free throws and then a 3-pointer for a 34-21 lead.

Jalen Steele put the exclamation point on a dominant first half, knocking down a 3-pointer with 39 seconds remaining to give the Bulldogs their 13-point halftime lead.

“We should have been down 20,” Kentucky coach John Calipari said. “They played outstanding and we played OK.”

The only bad news for Mississippi State was the loss of Rodney Hood, who sustained what Stansbury called a “sprained knee” late in the first half and didn’t return. The Bulldogs already had a thin playing rotation and used just six players in the second half.

It appeared to be a factor as Kentucky slowly wore Mississippi State down.

The Wildcats went on an 11-2 run to start the second half as the game turned feisty, with Kentucky’s Davis and Mississippi State’s Moultrie both receiving technical fouls. The Wildcats pulled within 55-53 with 7:17 left on a layup by Terrance Jones, but Mississippi State responded with a dunk from Moultrie and a 3-pointer from Bost to push the lead back to 60-53.

That’s when Kentucky started its game-winning rally, finally taking the lead on a hustle play by Kidd-Gilchrist, who grabbed his own missed shot and converted the layup for a 63-62 lead

The Bulldogs never could respond. Bost scored 16 of his points in the first half, but struggled on offense once the Wildcats put the 6-foot-7 Kidd-Gilchrist on him.

“He was long and bothered me,” Bost said. “But we got it to who we needed to get it to. We just didn’t hit the shots.”

Miller’s late 3-pointer in front of the Kentucky bench pushed the Wildcats over the top.

“Darius Miller is the fiber that holds that team together,” Stansbury said. “He’s the key to them.”