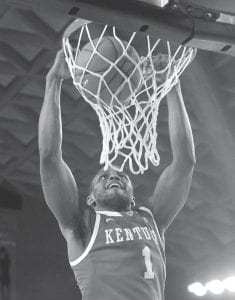 Surrounded by freshmen, the old man carried Kentucky in its first game back at No. 1.

Senior Darius Miller came off the bench to score 19 points and the top-ranked Wildcats cruised to a 12th straight victory, beating Georgia 57-44 on Tuesday night despite their lowest-scoring game of the season.

Miller, who had started eight of the previous nine games for Kentucky (20-1, 6-0 Southeastern Conference), returned to the sixthman role he had played earlier in the season. It didn’t really matter. The senior made 7 of 8 shots, including all four from 3-point range.

Good thing he did.

Michael Kidd-Gilchrist, with 14 points, was the only other Kentucky player in double figures. The Wildcats lowest-scoring game before Tuesday was a 62-52 victory over Old Dominion in November.

“I know there are times I have to step up,” Miller said. “We have different leaders. We all understand that. We’re happy with that. Tonight, the guys were looking for me because they knew I was hitting.” 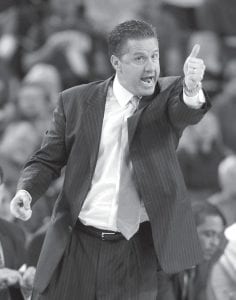 Kentucky coach John Calipari directed his team in the first half against Georgia on Tuesday. The Wildcats won. (AP)

Kentucky used spurts of 10-0 and 10-1 to build a 38-26 halftime lead. The Bulldogs (10-10, 1-5) never threatened in the second half, even though the Wildcats cooled off considerably. They went more than 5 minutes without scoring and made just 7 of 23 shots over the final 20 minutes.

Needless to say, coach John Calipari knows there are plenty of things his team can improve on before its next game Saturday at LSU.

Kentucky, which had been No. 1 in The Associated Press rankings for two weeks early in the season, returned to the lead spot after Syracuse lost last weekend.

For one half at least, the Wildcats lived up to the billing against a rebuilding Georgia team that has lost five of its last six, but did start out with some inspired play before its first home sellout of the season.

Led by Nemanja Djurisic’s 10 points, Georgia kept it close for much of the opening half. The Bulldogs withstood that 10-0 run by Kentucky and trailed only 23-22 with less than 6 minutes to go in the period.

Suddenly, the Wildcats turned it on. Kyle Wiltjer knocked down a 3-pointer, then passed to Kidd- Gilchrist for a dunk. Dustin Ware answered for the home team with a 3-pointer, but that jumper with 5:01 remaining was Georgia’s final field goal of the half.

Kentucky scored 10 of the last 11 points in the half, with Miller putting up seven straight on a 3-pointer and two jumpers from inside the arc.

“We have so many weapons,” he said. “Anybody can go off on any given day. We just look for the guy with the hot hand.”

This time, it was the lone senior in a seven-man rotation that includes four freshmen and two sophomores.

“He played great,” said freshman Anthony Davis, who managed only four points but did have 11 rebounds. “He was knocking down 3s and getting into the lane. That’s what Darius Miller can do.”

Wiltjer added his second 3-pointer of the half, and the Wildcats went to the locker room with a comfortable 12-point lead. The Bulldogs staggered toward their tunnel with heads down, knowing they had given Kentucky their best shot and still faced a double-digit deficit.

Even though the shots didn’t fall in the second half, the Wildcats never let up on the boards or at the defensive end. Kentucky finished with a commanding 41-26 rebounding edge and held Georgia to just 35 percent shooting (19 of 55).

Kidd- Gilchrist had a double- double, pulling down 11 rebounds.

In the second half, neither team seemed to play with as much fire — maybe because so many shots clanked off the rim — and the crowd amused itself with dueling chants of “Go Big Blue!” vs. “ U- G- A!” There certainly wasn’t much to cheer about on the court, with Kentucky appearing to play down to its competition and Georgia never getting closer than 10.

That wasn’t good enough for Calipari, who isn’t yet convinced his talented young team can make another trip to the Final Four.

“We’re just into our own thing right now and you can’t be a special team and be that way,” he said. “The biggest thing is let’s step this thing up. Last year’s team, I couldn’t believe we were as good as were so I didn’t have to say a whole lot. This year’s team, we could be really special and we’re not right now.”

Still, the Wildcats made it look easy. Since their only loss, a 73-72 setback to Indiana on a buzzer-beating 3-pointer, they have won by an average of 17.3 points.

Ware led Georgia with 12 points. Djurisic failed to score in the second half.

“We had a burp there on defense late in the first half,” Georgia coach Mark Fox said. “We were never able to get back in striking distance after that. It was a costly time period, but Kentucky is a terrific team. Their defense is just so good.”