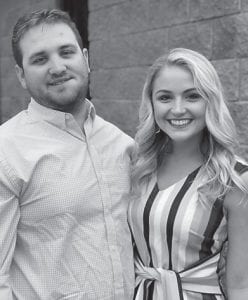 Have I got a tale to tell you all. I am glad it’s not on me this time, but instead on my older sister, Charlene Tacket Mason. There are lots of people that read this column that love to read about ones that Charlene has pulled, especially Randall and Bonnie Warf Kincer from Neon. Randall, you will surely get a kick out of this one.

I think I have mentioned before about how we always had chickens when we were growing up. Just about everybody did back then. We never had to buy eggs or chicken. I don’t even know if Jim Brown’s Country Store sold chicken.

When anybody wanted chicken for supper they just went out to the yard and caught one and either wrung its neck or chopped it off. Mamaw Pennington was the best at wringing their neck that I ever did see. She would wring it around and around and then give it a quick jerk and it was done for.

Well, our grandkids love to hear about these stories of how we grew up and Charlene’s grandkids have heard her stories many times, too. So, their son, Blake and his family have had chickens for a long time. He now has more roosters than he needs, so they decided since Charlene knew so much about killing and fixing chickens they would go ahead and kill some off. I’m not sure who did the killing, but instead of going ahead and scalding it after it was dead so the feathers would pluck out easier, Charlene said she wanted to pluck it and be able to do it dry so the feathers wouldn’t be so hard to pull off the skin. Then I think she said they ended up scalding it to get all the little pinfeathers and such off. 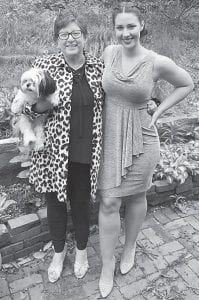 The ordeal of getting all the innards out was another adventure. Keep in mind Blake and Chasity have two children, Tucker and Chesnee, and they are watching and are involved in all this. They had a time with the craw and all the other parts inside a chicken that you don’t find in the ones you buy at the grocery store. But this wasn’t the best part of the story.

One of the roosters had black skin. Now, I’ve never seen anybody fix one of the fancy chickens like Blake has, but I’d say some of them probably do have different color skin and eggs. They went ahead and cut it up too, though, and Charlene was ready to fry them. 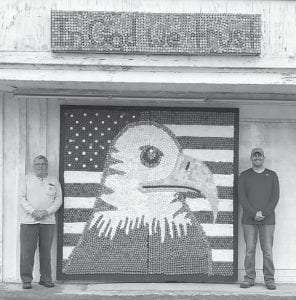 Tyler Watts (right) and his father Freddie Watts stand next to the eagle created out of bottle caps.

They fixed all kinds of fixings to go with the chicken and were so pleased with themselves for having raised their own food. Then when they all got their plates and sat down to eat, you couldn’t even sink your teeth into the meat it was so tough. Chesnee was determined and tried her best to eat it, but to no avail.

They later looked it up on YouTube and found out you’re not supposed to fry a rooster without cooking or braising it first to make it tender. Now Charlene’s grandkids will probably question her on what all she did when she was growing up. I would love to have had a video of this from start to finish.

Speaking of videos, I was watching the news Sunday evening and lo and behold if there wasn’t a story about Millstone Missionary Baptist Church. It started out with the church sign and then went inside the church to show all the papers taped to the seats where the usual church people sat during services. They talked a little to Preacher Bill but his granddaughter Celesta Riffe did most of the talking. It was such a great idea they had to help Preacher Bill during this time. I know how hard it must be for the pastors to not see all their church family during this quarantine time. I just pray that this is over soon, and we can start meeting again. Sometimes it just seems like a dream that all this is really happening. 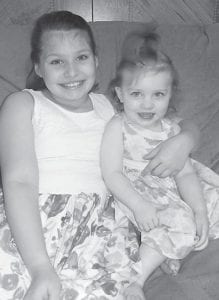 BIRTHDAY — Sophie Grace Holland celebrated her second birthday April 23. She is pictured with her big sister Makayla, 9. She is A daughter of Brandon and Ashley Holland of Cowan. Her grandparents are Marty and Mary Richardson of Cowan, Bert Holland of Vicco, and Gwen Holland of Hazard. She is a great-granddaughter of Glen and Sue Banks of Cowan and Lola Richardson of Jeremiah, and a great-niece of Commonwealth Attorney Edison G. Banks, II.

Three birthdays I saw on Facebook that I have to mention: first is Ollie Profitt on the 22nd. Ollie looks to be in her 70’s so I’ll not tell how old she turned. Then there’s Caleb Baker. He is the son of Robbie and Denise Baker and one of my favorite people. His birthday was on the 24th. And Fran Hicks celebrated her birthday on the 26th.

Another Facebook post that really caught my eye was the one of Tyler Watts’s creation that was put on the outside of the building, “The Restaurant,” across from Letcher Elementary and Middle School. Here awhile back he was asking for anybody that would, to save lids for him. This creation is one that he and lots of other people worked on with those lids. Tyler is the artist that does the displays on the store windows in Whitesburg with Post-it Notes. This eagle creation was made of 4,200 or so pop bottle lids. The ones mentioned that helped him were Chadrick Caudill, Subway’s Mary Janet Collins, Hester Maggard, Jeff Raglin, Richard M. Smith, Jean Hampton, Tyler’s dad, and his fourth grade math students who helped with the idea and the design. Tyler says, “Just remember, as you drive off the school hill, or drive by the old store, In God We Trust. With God, we will get through this together.”

Remember to be in prayer for Laney Webb, Pat McHone, Freedis Bailey, Aphae Profitt, and our neighbor Ethan Combs as he will be having gall bladder surgery next week. Also please be in prayer for all those that have lost loved ones, especially our pastor, Bill Jones, and his family.

If you can’t listen to a church service on the Internet try to catch some that are on the radio or TV. Hopefully, it won’t be much longer before we can attend our churches again.