Millstone sewer system may be saved 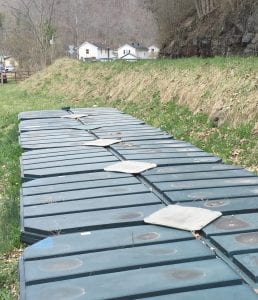 MILLSTONE SEWER — Local officials hope the Millstone Sewer System, which uses a peat filtration system, can be put back into service soon if the state gives its approval to the plan.

Bell Engineering representative Steve Caudill told the Letcher County Water and Sewer District Board of Directors that he believes the district should write a letter to the Kentucky Division of Water asking it to lift the closure order it issued for the plant last year. The shutdown order came after it became apparent that the leach field that treats the wastewater was no longer working and the cost to replace it was too great for the district to bear at the time. Caudill said that because of the efforts of district employees, the leach field is working much better now and other maintenance issues have been fixed so the plant can go back into service.

Caudill was addressing the board at its April meeting. During the board’s March meeting, Caudill reported that some planning was being done to extend lines in order to connect the 30 Millstone sewer customers to the Fleming- Neon Sewer System, but it will be some time before that is possible. The City of Fleming-Neon is looking for funding to revamp its water and sewer plants, but the upgrade of the water plant will take place first .

At the most recent meeting, Caudill also reported that work on Phase II of the Pine Creek, Pert Creek, Cram Creek Water Project is essentially complete and the project should be finished soon. The Bull Hole Storage Tank is complete and will be fenced when the tank has water in it so it can be verified to be serviceable. Construction is also complete on Phase III of the Deane Water Project.

The Kentucky Department of Transportation has reviewed the alignment of the second Knott County Interconnect and the project will be submitted to the Division of Water for review and approval. After the design is approved the project will go to bid within two to three months. The second interconnect will increase the district’s ability to draw water from the Knott County Water District, which supplies most of the county’s water from Carr Creek Lake.

Water and Sewer District Manager Mark Lewis reported a difference of $17,463 in the county’s cost of purchasing water between February and March, with the extreme cold causing line breaks that ran the cost up in February. Lewis said district workers are working to repair all the damage from the bad weather and added that $8,549 was collected from delinquent accounts in March as well. Lewis also said he had met with Federal Emergency Management Agency officials and the district will seek $4,948 for damages from the extreme weather.