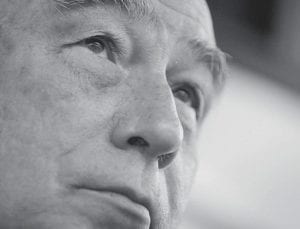 Robert Murray, founder and chairman of Ohio-based Murray Energy Corp., looked on Monday during a news conference on the rescue efforts for six trapped coal miners at the entrance to the Crandall Canyon Mine in Utah. (AP Photo/Jae C. Hong)

Instead, Murray went off. He ranted against environmental regulation, labor unions and the news media.

On live television last week, Murray turned an update on the Utah mine collapse into a platform for promoting the coal industry and his views of how it should operate. He specifically attacked the United Mine Workers union and mine safety advocates Davitt McAteer and Tony Oppegard, all of whom had told reporters of the dangers of “retreat mining” that the Crandall Canyon Mine employed.

To anyone who follows the coal industry closely, Murray’s performance came as no surprise.

Murray has developed a reputation for taking on unions and battling environmentalists. He’s become known for donating big money to Republican politicians, and for occasionally using his political ties to try to bully government regulators.

Above all, Murray is famous for saying what he thinks.

“What you see is what you get in Bob Murray,” said Steve Cohen, who handled Murray’s public relations for three years and now runs the group West Virginia Citizens Against Lawsuit Abuse.

Murray’s life story has been told before, in industry journals and business publications.

The Ohio native’s father was paralyzed in a mining accident, and Murray was forced to work to help support the family, the accounts say.

“By 16, he was mowing lawns every day after school, using a coal miner’s cap with a light on the front so he could continue to work past dark,” said a May profile in The Wall Street Journal.

Murray had hoped for a medical career, but instead got a scholarship to study mining engineering at Ohio State University. He then spent more than 30 years at North American Coal Corp., before being fired – the reasons are not clear – in October 1987.

Murray took out personal loans, and borrowed money against future coal delivery payments, to start his own company.

Since then, Murray has become a major player in the industry. His privately held company has 11 mines and 3,300 employees in five states, and touts a production figure of 32 million tons of coal per year.

Along the way, Murray has also become a major political player. Murray Energy ranks among the coal industry’s major donors to federal candidates. Since 1996, Murray has contributed nearly $1 million, most of it to Republicans, according to the Center for Responsive Politics.

Murray has also not hesitated to make use of those political connections.

In May 2002, two U.S. Mine Safety and Health Administration officials were transferred after they clashed with Murray over inspections at the company’s Maple Creek Mine in western Pennsylvania.

Later, West Virginia Public Broadcasting reported that Murray warned MSHA officials in Morgantown that the same thing would happen to them if they didn’t let up on inspections at his Powhatan No. 6 Mine in Belmont County, Ohio.

“Mitch McConnell calls me one of the five finest men in America, and the last I checked, he was sleeping with your boss,” Murray told the MSHA officials, according to meeting notes cited by public broadcasting. McConnell, a Republican U.S. senator from Kentucky, is married to U.S. Labor Secretary Elaine Chao, whose department includes MSHA.

After that meeting with Murray, MSHA Morgantown district manager Tim Thompson was transferred.

Murray has also dueled with environmental regulators and with citizen groups.

Last year, Murray sued the Pennsylvania Department of Environmental Protection in federal court after the agency denied an underground permit on the grounds it would drain streams.

Murray also fought for several years with regulators and citizens over his proposal to mine underneath the Dysart Woods, a tract of old-growth forest in southeastern Ohio.

Initially, Murray got along well with the United Mine Workers union. UMW members at the Powatan No. 6 Mine were especially pleased when he bought and kept open their troubled mine.

The relationship soon soured, when Murray asked for a wage freeze and refused to hire laidoff UMW members for new jobs, according to an article in the July-August 2001 UMWA Journal.

The UMW launched a massive public relations campaign against Murray. Murray fought back, filing a defamation lawsuit against union Secretary-Treasurer Carlo Tarley. Such tactics aren’t unusual for Murray. When the Akron Beacon-Journal published an unflattering profile, Murray sued the paper.

Murray’s company argues against efforts by MSHA and Congress to increase fines for safety violations. But Murray often pays the fines as they are assessed by MSHA, rather than challenge them in court. Last year alone, Murray paid more than $485,000 in safety fines at its five largest mines, MSHA records show.

Four years ago in Kentucky, a federal jury found one of Murray’s companies, KenAmerican Resources Inc., and four mine managers guilty of criminal charges that they conspired to ignore coal dust limits and cover up the violations. A judge gave the employees probation and fined KenAmerican $300,000 – an amount that federal prosecutors unsuccessfully appealed as being far too low.

“Some wealthy elitists in our country, who cannot tell fact from fiction, can afford an Olympian detachment from the impacts of draconian climate change policy,” Murray told a House Natural Resources subcommittee in March.

That performance won him a favorable review from the conservative New York Post, which dubbed him a “CEO with a spine.”

Murray is challenging reports from mine safety experts and the press that the Crandall Canyon collapse created seismic tremors that were picked up by earthquake sensors. Murray says it was the other way around – an earthquake caused the mine collapse, making the incident a “natural disaster.”

“So the Lord has already determined whether (the miners) are dead or alive from the percussion of the earthquake,” Murray said. UMW President Cecil Roberts issued a brief response.

“It is very unfortunate that at a time when six miners remain trapped underground and rescuers, including members of the UMWA, are risking their lives to find them, Mr. Murray has chosen to take time away from his urgent responsibilities to conduct himself in this manner,” Roberts said.

Rep. George Miller, D-Calif., and chairman of the House Labor Committee, noted that a new federal law requires MSHA to provide families and the media “with the most accurate information possible” during mine rescue efforts.

“The news conference held this morning at the mine did not meet this standard,” Miller said.

Ken Ward Jr. is a writer specializing in the coal industry for The Charleston (W.Va.) Gazette, where this report originally appeared.