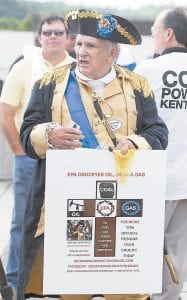 Paul Johnson protested the Environmental Protection Agency during a pro-coal rally outside the Frankfort Convention Center before the EPA’s public hearing in Frankfort on Tuesday. (AP Photo/The State-Journal, Hannah Reel)

Hundreds of coal miners took part in a demonstration Tuesday in Frankfort, claiming that the U.S. Environmental Protection Agency’s hold on 36 mine permits is costing them needed jobs in a fragile economy.

Environmentalists, meanwhile, urged the EPA to stand its ground because they believe the proposed mining operations would pollute streams.

The issue has produced heated rhetoric in Kentucky for two years. U.S. Senate Republican Leader Mitch McConnell added to it Tuesday in Washington, charging in a floor speech that his coalfield constituents are under siege by the EPA.

“Like most of the country, Kentucky is suffering from very difficult economic times,” McConnell said. “Far too many Kentuckians are unemployed and the prospect for future employment remains daunting. That’s why it is especially irritating that this administration has blindly followed ideological policies that eliminate jobs in our communities. The people of Kentucky are amongst the hardest-working people on the planet but how can we be expected to compete if our own government is working against us?”

More than 500 coal miners and supporters and more than 100 environmentalists held separate rallies in Frankfort before going into a public hearing the EPA scheduled to get public comments from Kentuckians on the stalled permits. State officials have approved the permits, but the EPA is holding them up because of concerns about water pollution.

Coal miner Josh Jackson, a heavy equipment operator for Arch Coal in Hazard, said people in the industry are worried about job security because of the EPA’s actions.

Environmentalists support the EPA’s objections to the new coal permits (none of which involve Letcher County mining operations).

“All I’m concerned about is people’s health, and that we have clean drinking water,” said the Rev. Donna Aros, pastor of First United Methodist Church in Louisa, a town on the Big Sandy River in eastern Kentucky. “I can’t even take my people down to the river for baptisms.”

Alex Desha, an organizer for the Sierra Club’s Beyond Coal Campaign, said the EPA “is rightfully stepping in where the state has consistently failed to act.”

Haven King, a former Hazard coal miner who now is the Perry County clerk, said miners are angry that the EPA is blocking jobs that are badly needed in Appalachia, an impoverished region where about one person in 10 remains unemployed.

“I don’t think that people realize how important coal jobs are in Kentucky,” he said.

“Attacking an industry so important to Kentucky will only succeed in putting people out of work, impeding future job growth, and increasing energy prices,” McConnell said.

Matt Wasson, a spokesman for the environmental group Appalachian Voices, said coal operators and politicians are attempting to mislead the public by saying the EPA’s hold on the permits is costing jobs. Wasson said demand for coal is low after an unseasonably warm winter that led to massive stockpiles at power generating plants.

“If EPA was to back off, it would not create a single new job,” he said. “It would not allow eastern Kentucky to sell a chunk more of coal. But it would give a greater advantage to the most irresponsible operators in the state.”

Deborah Payne, an activist with the Kentucky Environmental Foundation, said in a statement the EPA should continue to guard against pollution from mining operations.

“Our citizens are our most valuable resource. Kentucky legislators need to start acknowledging mine related health impacts and look for ways to mitigate them, not deny them,” she said. “Allowing the EPA to do their job, preventing the pollution that contaminates our watersheds, ultimately damaging human health is a good first step.”

The environmental activists said coal operators, by sponsoring the mass demonstration in Frankfort, were attempting to bully the EPA to cave in on the permits. But even Kentucky Coal Association President Bill Bissett doubted that would happen.

“I really don’t believe, even with this tremendous turnout and these powerful voices for coal, that the EPA is going to change its mind, and that’s very concerning,” Bissett said. “The best we can hope for with this administration is status quo.”