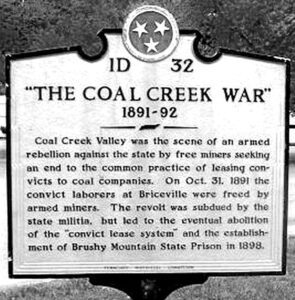 Several southern states enacted convict lease programs in the 1800’s allowing prisoners to work in mines, road or railroad construction and other industries. Tennessee Governor James Porter thought it could help balance the state’s budget, because the wages would be paid to the state for the work done by the convicts.

It also helped solve the problem of prison overcrowding. New prisons wouldn’t have to be built if enough prisoners were sent out into industry. At first it seemed to be a great idea politically because most citizens thought convicts should work and pay for their upkeep.

The problem was that the convict workers were taking jobs away from honest law-abiding citizens. That changed over the next several years.

Convicts arrived in the community of Wye in 1877 to work in the Knoxville Iron Company Mine in Anderson County, Tennessee. Soon the convicts complained they were being treated “worse than mules.” There was an endless supply of convicts. However, if one died or was injured and couldn’t work the prison would send another.

It saved the company money because the lease payments for the convicts was less than the wages paid to the regular miners. Plus, there was a cost to replace dead or broken-down mules.

The miners became angry and took up arms against the company. Eventually most of the men moved on and secured employment in other nearby mines at Briceville, Fratersville or Beech Grove. They were happier to do so … and happy miners were better miners.

In 1891 a new law enabled the miners to elect a weighman to verify how much coal each miner was to be credited with in determining his pay. The Tennessee Mining Company at Briceville refused to adopt the practice and the men went on strike. There was also an underlying issue. The Knoxville Iron Company at Coal Creek had a competitive advantage over the Briceville mine because of their use of convict labor. The men went on strike and the company promptly had the miners evicted from the company-owned houses. Incidentally, Coal Creek’s name was later changed to Lake City and in 2014 it became Rocky Top.

The miners seemingly had no place to turn when John Buchanan, the Tennessee governor at the time, answered the company’s request and had convicts sent to Briceville. The action resulted in a financial hardship to the miner’s families. Their backs were against the wall. This was the match that lit the fuse … the onset of the Coal Creek War.

The miners took up arms. In the early morning hours of October 31, 1891, they surrounded the stockade that held the convicts and their guards. It was taken without a fight.

The convicts and guards were marched to Coal Creek (now Rocky Top) and put on a railroad train bound for Knoxville. The miners sent a telegram to the governor explaining they felt compelled to stand up for their jobs and offered to meet with him. Governor Buchanan didn’t take kindly to the communication. He responded by sending a state militia to Coal Creek. Upon their arrival they began the construction of Fort Anderson on what became known as Militia Hill in the Wye Community.

Actions and counteractions occurred over the months that followed with the miners hoping the State of Tennessee would rescind their decision to use convict labor or at least in the coal industry.

Dick Drummond was one of the Coal Creek miners who fought the Tennessee militia. He was at the wrong place at the wrong time on a warm August night in 1892 when the militia captured and lynched him in Briceville. Drummond was pushed from atop a railroad bridge with a rope around his neck. He was found hanging the following morning.

The miners “were as mad as hornets” over the hanging. They attacked Fort Anderson and captured the commanding officer. Governor Buchanan retaliated by ordering a militia from Knoxville headed by Major Daniel Carpenter to reclaim the fort. The “Old War Horse” as Carpenter was called, knew the road to Fort Anderson would be well guarded. He decided to lead his men in an attack from the rear that would take his men across Walden Ridge.

“We’ll surprise the miners in their very nest,” he told his men. “When we get to Coal Creek, the miners will hunt their holes.”

Carpenter had his men get off the train at Offutt’s Station instead of Coal Creek. When they started up Walden Ridge, they took a wrong turn. The error set them back a whole day. Carpenter’s troops were up early the following morning but a general fog throughout the area delayed their movement until after sunup. The Old War Horse began to worry that the miners may then know of their whereabouts. Later when they neared the crest he found his fears were realized.

“Git, you hear me now git,” a miner said from ahead, in the middle of the path. Soon thereafter members of the militia heard another voice saying, “surround ‘em boys.”

The militia, knowing the miners had the superior positions high atop the hill hightailed it back down the mountain. Two members of the militia were killed during the retreat by the accidental discharge of their own guns.

“They were waiting to ambush us up there,” Old War Horse told a reporter at the base of the hill. “With their superior position I felt it best for us to wait and pick our battle.”

One of the soldiers told the reporter otherwise. “We saw just one miner up there.” he said. “Surely there were others, but we saw just one. He told us to git, and we got.”

The battle resulted in a victory for the miners. The following year Peter Turney became governor of Tennessee, and the convict lease program was discontinued. The miners no longer had to fret and fight over the unfair use of state convicts in coal mines in east Tennessee. copyright 2021 Jadon Gibson

Jadon Gibson is a freelance writer from Harrogate, Tennessee. His stories are both historic and nostalgic in nature. He wishes to thank Lincoln Memorial University, Alice Lloyd College, and the Museum of Appalachia for their assistance.