Miners travel to Washington to fight for black lung funds 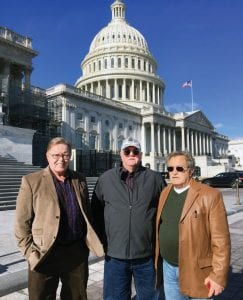 Retired coal miners and supporters from Letcher County and elsewhere in Appalachia were in Washington last week to urge lawmakers to extend a tax that benefits miners sick with black lung disease.

The excise tax paid by coal companies funds the Black Lung Disability Trust Fund, but if Congress doesn’t act the tax will decrease by about 55 percent at the end of the year.

Calling it a matter of life and death, supporters said the fund could be halved without the extension.

Kenny Fleming of Pikeville recalls working in an eastern Kentucky mine owned by Massey Energy that had dust so thick you “couldn’t see your hand in front of your face.” Fleming, 59, had to retire early from coal mining when he got sick with black lung.

“The trust fund is a lifesaver,”

Fleming, who worked 35 years in the mines, said. He traveled with a group of miners, family members and advocates to the Capitol to meet with lawmakers and staffers.

“It’s helped so many people in so many ways, but now it’s in jeopardy,” he said.

House Republicans inserted a one-year extension for the tax into a tax bill released this week. Fleming, who says he is hoping to live long enough to see his first grandchild born, called the one-year fix a “Band-Aid.”

“It’s a short-term solution to a long-term problem,” he said.

William McCool, a retired miner from Letcher County, also made the trip to Washington. McCool, who worked underground for 40 years, suffers from complicated black lung disease.

McCool, Fleming, and Jimmy Moore, the newlyelected President of the Southeast Kentucky Black Lung Association, which convenes in Whitesburg, urged Congress to extend the black lung excise tax for 10 years. The tax is set to be slashed on Dec. 31 by more than half. The group met with staff members of seven of the eight members of Kentucky’s congressional delegation (First District U.S. Rep. James Comer of western Kentucky was the only office they didn’t meet with), as well as a few other relevant offices including Senate Finance Committee, which has jurisdiction over the black lung excise tax in the senate.

McCool, Fleming, and Moore, who suffers black lung disease after working underground for 20 years, each shared their history of mining coal and how difficult it is to live with black lung, which often makes it challenging to perform even simple activities they could do before developing the fatal and incurable disease. Though offices showed interest in the black lung epidemic and excise tax, most offices made no specific commitments regarding a long-term solution to the issue, including Senator Mitch McConnell’s office.

Moore had previously met with these offices in late September, during which he shared a letter about the issue with each staffer and asked the letters to be shared with the member of Congress. During the meetings last week, Moore followed up about these letters, asking in each office if the letter had been read by each member of Congress. Moore also emphasized with offices the importance of Congress solving the miners’ pension issue.

The Black Lung Disability Trust Fund, which is financed by the excise tax, supplies benefits and a medical expense card black lung sufferers and dependents when a coal company appeals the miner’s black lung benefits award or when the company goes bankrupt, freeing it from paying black lung benefits. A federal report said the trust fund paid about $184 million in benefits to more than 25,000 coal miners and dependents in 2017.

If Congress allows the tax to be cut on Dec. 31, then current beneficiaries will not lose their black lung benefits immediately, and beneficiaries should not fear their benefit checks would not be paid in January 2019. But there will quickly be immense pressure to cut benefits or eligibility because the debt of the Trust Fund will, according to a May 2018 GAO report, quickly spiral out of control with the tax at less than half the current rate.

Rates of black lung, an incurable disease, have been on the rise in Appalachia in recent years. A study this year from researchers with the National Institute for Occupational Safety and Health found that rates of the most severe form of the disease are on the rise and that rate is highest in central Appalachia.