Miners’ union takes on the EPA 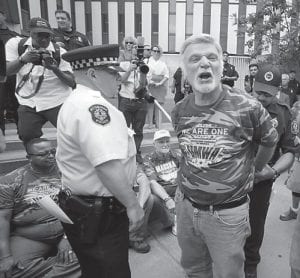 United Mine Workers International President Cecil Roberts, center,was arrested by Pittsburgh Police for blocking the sidewalk in front of the William S. Moorphead Federal Building after leading a march of union members and supporters through the streets of downtown Pittsburgh in support of American energy and jobs in the coal and related industries Thursday, July 31, 2014. Fourteen United Mine Workers members were arrested. (AP Photo)

Ken Ward Jr. is a reporter for the Charleston Gazette in Charleston, West Virginia and is one of Central Appalachia’s foremost authorities on the coal industry. This report appeared on Ward’s Internet blog, Coal Tattoo.

Union miners and others opposed to stricter pollution rules for coal-burning power plants proposed by the U.S. Environmental Protection Agency clashed inside and outside the city’s federal building on the first of two days of public hearings on the new regulations.

About 5,000 union members, led by the United Mine Workers of America, on Thursday (July 31) marched to the William S. Moorhead Federal Building chanting, “Hey, hey, EPA! Don’t take our jobs away!”

A few members of a Pittsburghbased union, Boilermakers Local 154, traded shouts and insults with about 300 environmental activists who stood on a nearby street corner as the march ended. “You’re sending our jobs to China! Use your heads!” one union member shouted.

Fourteen UMW members, including international president Cecil Roberts, were arrested for sitting on the federal building’s steps. Union members cheered as police gently led them away in plastic wrist loops. They were to be cited and released for blocking a sidewalk, said mayoral spokesman Tim McNulty.

The crisis facing our coalfield communities became all too real just yesterday (July 31) for up to 1,100 families with loved ones working for Alpha Natural Resources — but a close reading of Alpha’s press release shows that this isn’t just about EPA rules, and our lengthy Charleston Gazette story about the many pressures facing Southern West Virginia coal shows that stopping the Clean Power Plan alone simply won’t bring the sort of coal boom that political leaders like to hint is just around the corner if it weren’t for President Obama.

On July 31, United Mine Workers of America Government Affairs Director Phil Smith testified to EPA at the agency’s public hearing in Pittsburgh. Here’s his prepared testimony:

“Good Evening. My name is Phil Smith. I am the Director of Governmental Affairs for the United Mine Workers of America. As you probably know by now, more than six thousand union members and their families marched through the streets of Pittsburgh today, raising their voices in opposition to this proposed rule. Some of them, including UMWA President Cecil Roberts, UMWA Secretary-Treasurer Dan Kane and the entire UMWA Executive Board were arrested as they engaged in nonviolent civil disobedience on the sidewalk outside this building.

“All these people came here today because they have serious concerns about the effect this proposed rule will have on their lives. EPA’s own analysis of this rule acknowledges that thousands of coal miners will lose their jobs. That puts their ability to provide for their families at risk. And it puts the retirement security for retired miners, their dependents and widows at risk.

“That makes them, rightfully, very concerned. And since EPA has thus far refused to hold one of these hearings in the coal producing areas of the country, they had no choice but to come here to make their voices heard.

“And I assure you, you have not heard their voices for the last time. If EPA does not have the courage to come to the coalfields and look the people who will be most harmed by this and other rules in the eye, then they will keep coming to you.

“It is important that we put into perspective what this proposed rule does and does not do. The Clean Power Plan is and always was about taking action to reducing greenhouse gas emissions from existing sources. But will it? I have heard some in the environmental community complain that it does not go far enough.

“I can understand their point, if EPA’s goal is to significantly reduce global greenhouse gas emissions. This proposed rule does not do that. Indeed, it will have a fairly insignificant effect on global emissions, reducing them by about 1 percent.

“But in exchange for that one percent reduction, tens of thousands of coal miners, electrical workers, boilermakers, utility workers and railway workers will lose their jobs. The pensions and health care retired miners earned through decades of dangerous, backbreaking work will be threatened, if not eliminated entirely. The harmful effect on their families and their communities will be significant.

“We don’t see this as a fair trade-off. Some say there will be other jobs created that our members can get. But where will those jobs be? What will they pay? What benefits will they have? You are asking people who earn about 27 dollars an hour plus benefits — and believe me, they earn that money working in a coal mine — to willingly give that job up, take the government’s word for it that there will be another job, move away from the place where their families have lived and died for generations, then get retrained to do something that will likely pay much less than they earned before, with few if any benefits. Nor is it likely that this new job will have the protections of a union contract. How can anyone wonder why our members are upset about that prospect?

“Some have said that the United States needs to take the lead on combatting climate change with this rule. If we do it, others will follow, or so that line of thinking goes. But how do we know this? I am no expert in foreign affairs, but I do know something about economics and the global marketplace.

“The truth is that rising economic competitors like China and India have welcomed millions of what used to be American jobs to their shores in the past decades. They are able to do that by providing cheap labor and cheap energy. They will continue to have both in abundance for decades to come, and that energy is and will continue to be powered by coal no matter what we do.

“The UMWA does not dispute the science regarding climate change and the role greenhouse gas emissions play in that. We understand that steps need to be taken to address this issue. Our very real concern is that this proposed rule does not do that in a way that is fair to all Americans and their families.

“So here are my requests of you today. First, bring these hearings to the coalfields. You have a responsibility in a representative form of government to hear from those who are going to be most affected by this rule.

“Second, go back and take a look at how you can take meaningful steps in this rule to incentivize the development and application of technologies that will allow our nation to continue to take advantage of its most abundant fuel source, coal.

“Lastly, don’t destroy the lives of the very people who did what our nation asked of them — providing the coal that for the last 150 years has energized America and provided us with the means to become the most powerful nation on earth. Please, hear their voices. Thank you.”