Miss Kentucky USA making the most of her opportunity

Pageant to air on NBC on June 8; Kincer excited family will be there 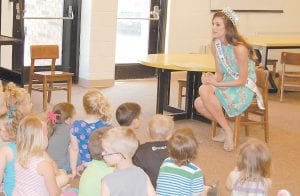 Miss Kentucky USA Destin Kincer spoke with students at West Whitesburg Elementary School Monday morning after reading to them from a book. (Photo by Sally Barto)

After earning the coveted title around midnight on January 12 in Louisville, Kincer, 21, of Little Cowan, said she looked forward to all of the opportunities that come with being Miss Kentucky USA. She is making the most of each chance.

“I feel like I am the same sweet Southern girl, but I am getting to do a lot more,” said Kincer.

She attended the Kentucky Derby for the first time May 3 — something she had wanted to do for a long time. Kincer’s experience was probably different than most Derby goers since she got to walk on the red carpet while most people her age are relegated to the infield.

She and Miss Teen Kentucky USA Megan Ducharm watched celebrities enter the Blue Room (formerly known as the Green Room) at Churchill Downs. Kincer had her picture taken with Kris Humphries, a forward with the NBA’s Boston Celtics. She met actress Angela Bassett. From a distance she saw Kentucky Gov. Steve Beshear. 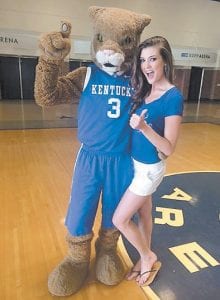 Little Cowan resident Destin Kincer, reigning Miss Kentucky USA 2014 and a University of Kentucky student, poses with the UK mascot May 5 at Rupp Arena. Kincer was being filmed by an NBC crew for a feature to air before the Miss USA pageant June 8.

While attending the Unbridled Eve Gala at the Galt House in Louisville, she saw actress Laura Bell Bundy, Philadelphia Eagle quarterback Mark Sanchez and Bob Guiney of “The Bachelor.”

“Everybody was super nice,” said Kincer.

Wearing a Derby hat was a highlight of Kincer’s Churchill Downs experience.

As Derby festivities came to an end, finals week at the University of Kentucky began. After being crowned Miss Kentucky USA, Kincer had thought about taking the spring semester off but decided to attend classes instead. As a pre-med major, she took 12 hours of classes including cell biology, French and a biology seminar.

“It was hard at times,” said Kincer. “I just thought that the people at the Miss USA organization will appreciate a girl who is in school and a state title holder.”

Now that finals are over, Kincer is preparing for the Miss USA pageant. Exercis- ing, working on interviews and polishing her public speaking skills are at the top of her list. 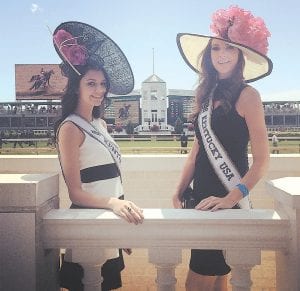 “I had such a wonderful time visiting the students at West Whitesburg Elementary School,” she said. “One thing that I really wanted to leave them with is how important education is. Doing your best and eventually pursuing a higher education is in my opinion a key for success later on in life.”

Kincer read a book to preschool, kindergarten and first grade students in the library. Then she visited all classrooms in second through fifth grades and asked them what kind of jobs interested them and encouraged them to study and continue to go to school. She let students ask her any questions. One student asked her who did her makeup, while another asked if she liked to play zombie games.

In March, Kincer met fashion designer Sherri Hill who created a white mermaid gown for Kincer to wear in the Miss USA pageant.

Hill has asked Kincer to model in her fashion show in August during New York Fashion Week.

An NBC film crew visited Kincer May 5 to shoot footage for a special segment to air before the Miss USA pageant, which starts at 8 p.m. on June 8. Twenty of 51 contestants were interviewed for the segment. Kincer was filmed at Rupp Arena with UK’s mascot Scratch. She is happy that her parents, Stephen and Mitzi Kincer, and brother Dylan were also a part of the filming.