Miss Letcher County was Miss Kentucky. But then she wasn’t before she was again.

By JOE CREASON
The Courier-Journal 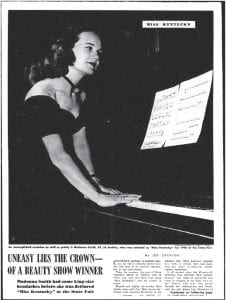 Seen above is the first of a two-page magazine spread about Madonna Smith that appeared in the Sunday, September 1, 1946 edition of The Courier-Journal of Louisville.

EDITOR’S NOTE — When comedian and TV and radio host Steve Harvey mistakenly announced the wrong winner at the 2015 Miss Universe pageant last December, it was seen as one of the all-time great failures in the world of entertainment, made even worse by video showing the announced winner, Miss Colombia, having the tiara taken from the top of her head and placed on the head of the true winner, Miss Philippines.

Harvey’s mistake wasn’t the first time the wrong winner was declared in a beauty pageant. At the Kentucky State Fair in 1946, Louisville Mayor Leland Taylor placed the crown on the head of Miss Letcher County, Madonna Smith, when it should have been awarded, by a narrow vote of the judges, to Miss Paducah, Emma Lee Blackford. However, Miss Blackford was soon disqualified and the crown was re-awarded to Miss Smith, of Jenkins.

The confusion and its aftermath was reported on Sunday, September 1, 1946, in the Louisville Courier-Journal’s “Roto Magazine” by legendary columnist Joe Creason. 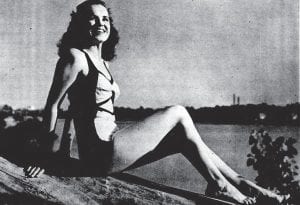 This photograph of Miss Kentucky 1946 Madonna Smith of Jenkins appeared in the Courier-Journal of Louisville on September 1, 1946 and shows Miss Smith on the banks of the Ohio River.

Contrary, perhaps, to popular opinion, the life of a beauty contest winner, like that of an elevator operator, has its ups and downs.

Take, for instance, the case of Mary Madonna Smith of Jenkins, who, in order, was, was not, then was again “Miss Kentucky,” and all within 12 hours.

Brunet and highly see-worthy, Miss Smith, who with Pat “Miss Louisville” Fenton will represent Kentucky at the Atlantic City “Miss America” pageant this week, is certain she’s had more than her share of king-size beauty contest headaches.

It all started when this 19-year-old Madonna was selected “Miss Letcher County” and came to Louisville last week to compete at the State Fair for the Atlantic City trip. She passed through the eliminations, and finally only she and Emma Lee Blackford of Paducah were left. The judges huddled, and Mayor Leland Taylor was notified that Miss Blackford had been declared the winner in a photo-finish.

However, by mistake he placed the crown on Miss Smith’s head.

That was when she was “Miss Kentucky” for the first time. Well, the error was righted and Madonna was about ready to give up the beauty contest business.

That was when she wasn’t “Miss Kentucky.”

But came the morning, and it was learned that Miss Blackford was only 17, and prospective “Miss Americas” must be at least 18. She was declared ineligible to win.

That was when Madonna was “Miss Kentucky” the second time. And that time was for keeps.

Since beauty contestants these days must show some talent other than looking pretty, she sang in the Fair contest. But that’s just the start of her musical ability. She has taken music since she was 7, and plays the piano, a saxophone, can dance, was a drum majorette in high school and American Legion bands, and has taken part in school and town dramatics.

She also is a member of the Jenkins Methodist Church choir, and every other Sunday sings a solo. She’ll sing at Atlantic City. Right now. Madonna works in the auditing department of the Consolidated Coal Company in Jenkins; and she knows the coal business from A to John L. Lewis, since her father owns a Letcher County mine. However, her heart isn’t exactly buried in her auditing books. The movie, stage and radio contracts that go with the “Miss America” contest sound plenty good to her.

“Golly!” she said. “I sure would like to get a contract. That’s just what I’d like to do.”

In many ways, Madonna looks a lot like Deanna Durbin of the movies. She has dark brown, almost black, hair and deep blue eyes. She is 5 feet 6 inches tall, and has the kind of figure to which her clothes hang in admiration. Slightly superstitious and dimpled on the left side of her chin, she was graduated last spring from Jenkins High School.

Except that she’s pretty enough to be “Miss Kentucky,” Madonna is like most other girls. She admits that winning the contest, finally, was about the most thrilling thing that ever happened to her. And, like practically all girls, she likes sports, especially football. She swims, but, she says, not too well. On second thought maybe she isn’t like most girls — she doesn’t like Frank Sinatra. While most gals her age reach for the smelling salts, even when his name is mentioned, “The Voice” leaves her more than somewhat cold. She’d rather hear Bing Crosby any day.

Next to Madonna herself, perhaps the most excited person over the sudden switch in winners was Mrs. W. P. Nolan, co-publisher of The Mountain Eagle, a weekly paper at Whitesburg and co-sponsor of the champ, or champess, or whatever it is you call a feminine winner. After Madonna had been declared in, she made enough long-distance phone calls to Letcher County in passing the good word to bring a smile to the face of every Southern Bell stockholder.

Actually, Madonna is only a sort of transplanted Kentuckian. She was born just over the line in West Virginia, but her folks migrated West when she was 5.