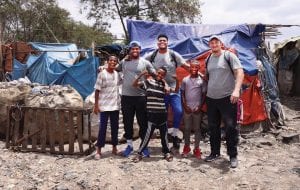 Kelly Putty is a Hopkinsville, Kentucky native who went to Ethiopia in 2008 to adopt a child and had her “eyes opened” to the needs so many children had there and founded Ordinary Hero to advocate for more children there to get adopted.

Jason Schlafer is the executive assistant athletics director at the University of Kentucky who has an adopted child from Ethiopia. His eyes were opened to the need when he started arranging for UK athletes to go on mission trips to see what the situation was like there due to the passion he had for the Ethiopian orphans.

Putty and Schlafer just “happened” to connect and last year Putty took a group of UK female athletes to Ethiopia, an experience that softball stars Katie Reed and Jenny Schaper made a lasting impact on them. Volleyball player McKenzie Watson “got her world rocked” on the trip according to Putty and started sponsoring a youngster because the experience changed her life.

“Those girls were all amazing. They served their hearts out and loved every minute of it,” said Putty, who now lives in Brentwood, Tennessee, and has five biological children and four she has adopted ranging in age from 15 to 27.

Schlafer liked the way Ordinary Hero facilitated the trip and Putty says there are various ministry sites her trips always visit that include a feeding program on top of a mountain and visiting a trash dump community where the college athletes walk “right through the trash dump to smell and experience” the way kids live daily. They also visited an orphanage and took teenagers who had never been out of their village, been in a movie theatre or even seen a movie to play arcade games and see the Avengers movie.

“Each day we do something different to open their eyes to a new community and new need. Going into the homes made from trash and getting first-hand look at that always makes a huge impression,” she said.

Ordinary Hero and Putty recently got back from another trip to Ethiopia that included UK football players Landon Young, Calvin Taylor and Boogie Watson, who are all expected to be starters this season.

Putty says because of their size the football players get attention as soon as they step off the bus.

“The kids in Ethiopia can’t believe what they are seeing,” Putty said. “The culture is so loving and welcoming. These kids are so grateful for anyone to visit. In the (United) states, the players got a lot of notoriety and are famous players. But to the kids in Ethiopia, they are just big boys who came to visit. They don’t know them from Adam. The families all really appreciate the time they take to visit.

“I think the football players were all blown away by the way the culture shares when most of them have nothing. They kept making comments after giving food to a child that the child would take it and give it to the child next to them before taking any for themselves. The players said if you hand them food, they eat it. But not these kids.”

Putty says the UK athletes make her “proud to be from Kentucky” because they take time to serve. It’s about a 17-hour — or more — airplane ride to get there for usually about five days on the ground. Jet lag is always a problem but Putty said conditions were even more severe on the recent trip with heat at an all-time high and flies “rampant” everywhere.

“They all just trudged right through it with no complaints,” she said. “Those were conditions they were not used to but they were so focused on serving others that they didn’t let anything bother them. Every athlete we have taken there from UK has come to really make a difference and that makes me so proud to be from Kentucky.

“I am such a mom and mothered these athletes all week. I had them call their moms and made sure they drank plenty of water. I sadly don’t know a whole lot about football and have six sons who get on to me about not knowing football all the time. I’m more a mom than a football fan but it will be fun now for me to come watch a game with these players I know.”

How humbling/rewarding is the process? Consider that Young came home in May and then contacted Putty to let her know his family would like to sponsor 12 different Ethiopian families from the trash dump site at $55 per month per family to help provide food, access to medical care, educational support and more.

“I never had anyone sign up to sponsor that many families at once,” Putty said.

If you would like to find out more about Ordinary Hero, how to become a sponsor, or make a donation, go to ordinaryhero.org. You can also email Putty directly at kelly@ordinaryhero.org.

“Our mission is to inspire and empower ordinary people to change the life of a child in need,” Putty said.

Florida high school teammates Nik Scalzo and Nik Ognenovic will be roommates at Kentucky for their freshman year when they report to campus next week.

Both played for Cardinal Gibbons High School. Scalzo was a three-year starter at quarterback before a knee injury in a November playoff game ended his season. Ognenovic was a three-year starter at tight end. They played together for South Florida Express in the spring of 2018 and won the Adidas 7-on-7 National Championship before helping their high school team win the 2018 state championship.

“They are great friends and hold each other accountable,” Jerry Scalzo, the quarterback’s father, said. “They give each other great balance and have just a great relationship. I think it is a big benefit to him (Scalzo) not to have to worry about who is roommate will be or what to expect from him. They know plenty about each other.”

“You can’t teach 6-6 and about 245 pounds,” Scalzo said. “He was always a basketball player. He’s only been playing real football for about two years. Once you get him there (Kentucky) and he understands the reality of big-time football, he will excel.

“He has been training like an animal the last six months. He’s put on 20 pounds. He’s excited to get to Kentucky and get started. They both are. The season has been over for six months and they are ready to get on the field and get going.”

Kentucky volleyball standouts Leah Edmond and Madison Lilley were among 17 players that attended the national volleyball team spring training camp in March and coach Craig Skinner knows it was a huge plus for both players — and his team.

“When you are playing with the elite players in the country and everybody is in the top one percent of the players in the country, it forces you to get out of your comfort zone,” said Skinner. “It is a lot easier than the coach telling them they have to play harder or at a higher level. You don’t have to do that against elite competition. Mentally and physically it just gets you to another level.”

Edmond, the 2019 Southeastern Conference Player of the Year, said the camp not only was fun let her work with a “whole different group” of players.

“Also in international play you have to be able to pass, so I had to work on that a lot,” Edmond, who has been in Brazil the last two weeks with UK teammates on an exhibition tour playing Brazilian teams, said. “Being around different type of players is good and different opinions from coaches on your game is always good.

“You are only there for a week, so you run their system. You play in a different way. I was passing most of the time. Here I am just hanging out on the back line waiting to hit. It was really challenging and I really enjoyed it.”

Lilley said it was beneficial to be “exposed” to different players and playing styles.

“It was cool just to get used to the way USA gym runs things instead of crazy competition because we were not playing against anyone except ourselves,” Lilley, the 2019 American Volleyball Coaches Association Southeast Region Player of the Year. “It’s strictly USA system. But at the same time I love being in the gym here in Lexington, too.”

Skinner, who took his whole team on a two-week exhibition trip to Brazil, said he could sense a difference in Edmond and Lilley when they returned from the USC workouts.

“They saw a different level that can internally motivate them with a coach telling them to do something. And that presence has an impact on people around them and helps our whole team,” Skinner said.

Kentucky’s 2022 non- SEC football schedule is now set with the addition of a home game against North Illinois on September 24 in the first ever meeting between the two schools.

Previously games with Miami (Ohio) on Sept. 3, Youngstown State on September 17 and Louisville on November 26 had been announced.

“Making sure that we play the likes of Notre Dame, Kentucky, etc. so that at the end of the year we’re in those conversations for a January 1 or an Access Bowl bid. I think to get there you must schedule strategically not just for year 2019 but for year 2025,” Northern Illinois athletics director Sean Frazier said.

“I think it’s very important for us to be very intentional with our schedules to play someone to have a body of work that’s worthy of review and assessment and I think that’s what we’re doing here at NIU.”

Northern Illinois has a new coach this year in Thomas Hammrock. The Huskies have been to bowl games in 12 of the last 15 years under five different coaches. Northern Illinois played in the Orange Bowl in 2012.

Quote of the Week: “Brad’s never in the doghouse! He’s my favorite little brother and nothing he could ever do would make me that mad at him,” Megan Calipari after finding out on Twitter that her brother, Brad, was contemplating a transfer from Kentucky.

Quote of the Week 2: “She is an exceptional student-athlete and role model. She’s truly at the top of her game in all facets, and has already at a young age made a positive local and global impact. Our sincere congratulations to her, her team and to the University of Kentucky,” Erik Miner, the Senior CLASS Award executive director, about UK’s Katie Reed after she was named the 2019 national winner.

Quote of the Week 3: “I am excited for him and his family to be back in Lexington. He is not allowed to technically go out and recruit but I am pretty sure he can do most everything else around the (football) facility. I think it will be a big help to me to have him around,” UK quarterback commit Beau Allen on Mark Perry, his former coach at Lexington Catholic, now being an offensive analyst for Mark Stoops.