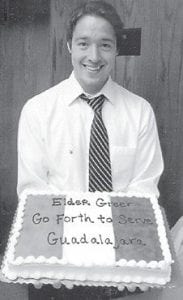 Seth Alexander Greer of Jeremiah, is serving as a missionary at the Guadalajara, Mexico mission of the Church of Jesus Christ of Latter-Day Saints are receiving two months of training in Spanish at the Missionary Training Center in Provo, Utah. He is the son of Lana and Darryl Greer of Jeremiah, and is a 2008 graduate of the June Buchanan School on the campus at Alice Lloyd College at Pippa Passes, where he was salutatorian. After completing a two-year stint in Mexico, Greer will attend Brigham Young University.