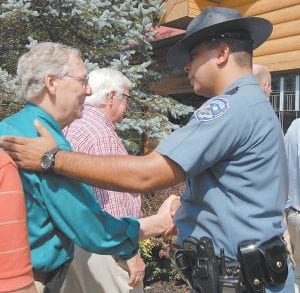 Campaigning in Letcher and other eastern Kentucky counties last week, Sen. Mitch McConnell pinned the loss of thousands of Kentucky mining jobs on President Barack Obama’s Environmental Protection Agency and said his Democratic election rival would be a vote to continue them in Congress.

Rarely, if ever, mentioning Alison Lundergan Grimes by name, McConnell instead said unspecified “people are against the Kentucky way of life and need to be sent a strong message by the voters in November. …”

McConnell is in a close race with Grimes in his drive to win a sixth term. As the Senate’s top Republican, he is also in line to become majority leader if the party gains a majority this fall.

His two-day bus tour brought him to Letcher County on Thursday. Obama is particularly unpopular in this region, and the senator criticized him by name repeatedly. He linked Grimes to the president and his policies, saying, if elected she “would be a new face that will do what Obama says.” 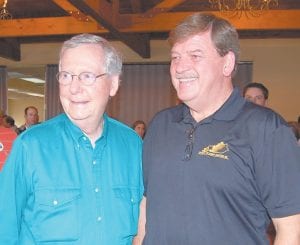 Senator McConnell posed for a photo with Letcher County Judge/ Executive Jim Ward after the address to voters. (Photo by Sally Barto)

Grimes has consistently denied the charge when it comes to coal, saying frequently that she opposes the president’s approach. In a statement, her campaign manager, Jonathan Hurst, said McConnell has “a 30-year record of failing to stand up for our coal miners.”

McConnell campaigned before an appreciative crowd at the Pine Mountain Grill in Whitesburg.

He was here one day after former President Bill Clinton campaigned for Grimes in Hazard.

He also boasted, “I know how to handle the Clintons.” He recalled that he piled up a 160,000- vote margin in his own re-election race in 1996, while Clinton carried Kentucky narrowly in winning a second term in the White House.

State figures show eastern Kentucky has lost about 7,000 jobs — about 2,000 of them in Letcher County — in the mining industry and thousands more in other fields dependent on coal in recent years. While McConnell asserted that environmental regulations are the cause, industry officials say the deep economic recession has played a role. Also factoring in the decline is growing competition from natural gas, which has come down in price as fracking — the practice of extracting oil and gas from rock by injecting highpressure mixtures of water, sand or gravel and chemicals — has become more widely employed.

Still, the EPA is readying a regulation to curb pollution blowing into nearby states from power plants and other rules to cut carbon dioxide levels by 30 percent from 2005 levels at existing plants. Another proposal would require improvements to cooling towers so they kill less fish and larvae.

McConnell was accompanied in Whitesburg by Rep. Hal Rogers, the veteran Republican congressman who routinely wins re-election by overwhelming margins in the region. Also on the bus was Kentucky Senate President Robert Stivers of Clay County. Strivers’s wife, the former Regina Combs Crawford of Whitesburg, is a member of McConnell’s Kentucky staff.

In his own remarks, Rogers said the November election between McConnell and Grimes is “the most important one we will ever have — you and me.”

Rogers criticized Senate Majority Leader Harry Reid for holding up legislation that would cut the funding of the EPA and said that would change if McConnell wins in November and the Republicans take over the Senate.

“If we had a friendly majority leader over there,” Rogers said referring to McConnell, “we can pass it and send it to the White House and make Obama veto it.”

Rogers noted that Grimes would be a freshman if she is elected, and added that freshman senators are “about as useful as something on a boar hog.”

Grimes “would be trying to find the bathroom” for the first six years she was on the job, Rogers said.

Striking a more serious pose, Rogers said the job losses in the coal industry are the work of the EPA and are “mean spirited.”

“It’s having a disastrous impact on our region,” he said.

McConnell said EPA’s effect on eastern Kentucky mining jobs “is all pain and no gain, and we need to stop them this year.”

“We need to take our country back,” he said.