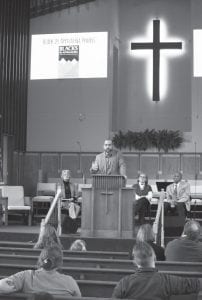 A story is like a tale of two mountains, William Isom II said Monday at the Martin Luther King Jr. Breakfast at First Baptist Church in Whitesburg.

One mountain is the official narrative — the courthouse records and the newspaper stories. The other is the vernacular history, or the oral history, told by the people to each other.

Isom, director of community outreach at East Tennessee PBS in Knoxville, was the featured speaker at the annual breakfast in Letcher County honoring King, the preacher and civil rights leader killed by an assassin’s bullet on April 4, 1968.

Isom is a filmmaker and historian who sees himself as building on the work of William H. Turner, dean of the College of Arts and Sciences at Kentucky State University, to uncover the lost history of African Americans in Appalachia. Isom said that because of his appearance, people are sometimes offended by his work because they feel he is appropriating African- American culture and history. He said he feels compelled to tell audiences he is black. His father is black, and he identifies as black, also.

Because of slavery, most black history is difficult to find before 1863, especially genealogical information. Isom said sometimes, as in Claiborne County, Tennessee, a Census worker might have taken it upon himself to write in the names of slaves on a slave schedule, or a slave owner might have listed the names of slaves in a will as he bequeathed them to a descendant, but for the most part, the record is blank.

“And stories and information have been hidden by black families themselves. A lot of times stories are too painful, and they don’t want to talk about it,” he said.

People often excuse Appalachia’s role in the Civil War and slavery, saying things were different here because “we were all poor.”

And while everyone has heard of lynchings of African Americans in the Deep South, Isom said there is documented history, often not widely known, of lynchings in the coalfields as well.

Isom is working on a series of 30-minute television shows for East Tennessee PBS about black history, and lynchings will be part of the difficult history presented in the series. There are more uplifting stories as well, Isom said, such as the 8th of August, a holiday for African Americans that used to be celebrated in some parts of Appalachia, and is still celebrated in western Kentucky. The day is the anniversary of the date in 1863 when Andrew Johnson, then the military governor of Unioncontrolled Tennessee and later vice president and president of the United States, emancipated his personal slaves.

It’s that sort of little-noticed history that Isom is trying to bring to light to educate a wide audience.

Race relations, or more accurately inter-racial relationships, in Appalachia can make that history even more murky and difficult to dig out.