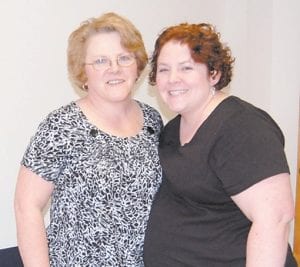 Breast cancer survivors Henrietta Wright and Danita Conn are raising money to participate in the Susan G. Komen 3-Day for the Cure walk in Cleveland, Ohio. The mother and daughter from Letcher County are training to walk 60 miles in three days. All money raised will go to breast cancer research and community education programs.

Danita Conn has faced several challenges since she was diagnosed with breast cancer last March and now she has decided to raise money for breast cancer research by going to Cleveland, Ohio, and walking 60 miles in three days later this summer.

In the last year, the 30-year-old mother of three has gone through 28 radiation treatments, six rounds of chemotherapy and a mastectomy, while not missing soccer practices and other important moments in her children’s lives. Her children are six-year-old Jadeyn, four-year-old Lincoln, and 19-month-old Logan.

Conn recently asked her mother, Henrietta Wright, who was diagnosed with breast cancer in 1991, to participate with her in the Susan G. Komen 3-Day for the Cure fundraising event in Cleveland July 30–Aug. 1.

Komen for the Cure was created after Nancy G. Brinker promised her dying sister, Susan G. Komen, that she would do everything she could to end breast cancer. Since 1982, more than $1.5 billion has been raised through Komen for the Cure, which is the largest nonprofit organization committed to fight against breast cancer.

Conn, of Whitesburg, and Wright, of Mayking, will walk 20 miles a day during the three-day event and sleep in a pink two-person tent in a designated area with hundreds of other participants.

“I don’t camp and I don’t walk, but for her I am going to do this,” said Wright.

In addition to training to prepare for the physical aspect of walking long distances, Conn and Wright each must raise $2,300 for breast cancer research and for community-based breast health and education programs.

“This is a big thing we are undertaking,” said Conn.

Conn is taking a proactive approach and is walking to raise money for research to end breast cancer hoping that her children will never have to worry about the affects of cancer.

“I walk for them,” said Conn. “I don’t ever want them to worry about who is going to raise their children.

Conn said while going through treatments she worried about who would rear her children if she died.

“I walk so my children won’t have these worries,” said Conn. “I walk so if their hair comes out it’s because of nature, not medicine. I walk because everybody deserves a lifetime.”

“In walking our goal is to fund more medical research so her kids and my grandkids won’t have to go through this,” said Wright.

Wright said advances in treatment have been made since she was diagnosed with breast cancer in 1991.

“Nineteen years ago when I went through mine, the rate of survival was less and treatment was more severe,” said Wright.

Conn said she can’t help but think that all of the thousands of people who have raised money and participated in walking events have helped save her life by contributing to research efforts. Now she says it is her turn to help raise funds.

Conn and Wright want community members to get involved and be a part of their experience. The mother/ daughter duo is selling bracelets for $13 apiece and will soon be taking chances on a quilt.

“Please support me as I take an amazing journey in the fight to end breast cancer,” said Conn.