Mom gets clean bill of health 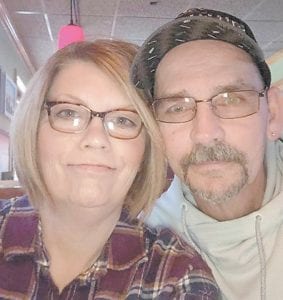 Well, we finally got Mom out of the house last week! It was to see the doctor, but at least she got out of the house. They said she was in great shape, lungs clear and heart sounded really good. She had to have her thyroid gland removed about eight years ago and so she takes Synthroid. Her doctor thinks her levels may be off a bit and so changed her dosage. Other than that she got a clean bill of health once again.

I wish I could say the same thing about our friend from Letcher County Senior Citizens, Maxine Quillen. She is still in the hospital but, according to her daughter-in-law, Krystal Quillen, she has now been moved into a room and out of ICU. She was admitted with pneumonia and then her blood pressure dropped with other complications and she was moved to ICU. She is still in bad shape, so they are wanting everyone to pray for her. She plays Mrs. Claus for Christmas events all over Letcher County. She makes a perfect Mrs. Claus in my opinion. She also has been having lots of problems with her pancreas and so, because she and I have this in common, we usually talk each morning at the rec center about our recent problems. 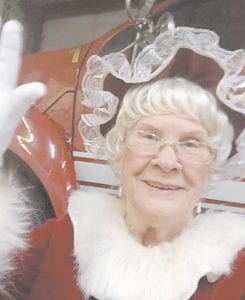 Maxine B. Quillen as Mrs. Claus

Speaking of pancreas problems, while at Mom’s a call came through on the Millstone Missionary Baptist Church prayer line for Brandi Collins again with pancreatitis. She has suffered with this for a few years now and they have been to many different hospitals in Kentucky and other states with no solutions. So, keep this family in your prayers also.

My sister, Charlene Tacket Mason, also had to go to the doctor today. She thought she had the flu and while at MCHC she messaged us and said she thought she was in China. She said there were people in masks all over the place and people coughing like crazy. So far my three grandchildren have managed to avoid it. Thankfully our superintendent cancelled school last week to keep others from passing the flu around. Charlene didn’t have the flu virus, thank God.

Congratulations go out to Florene Tilley Stamper on her first grandchild. Ollie Tyr Stamper was born on January 22. Flo hasn’t had a chance to go see them yet, because they live in Michigan. Hopefully she will get a chance to go before long. 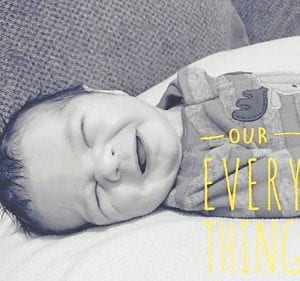 Ollie Tyr Stamper is the grandchild of Florene Stamper.

Our 1975 Whitesburg High School graduating class is now planning our 45-year reunion. Sondra Holbrook Phillips has posted on Facebook plans to meet this Saturday the 8th at Pine Mountain Grill at 2 p.m. She would like everyone in our class to meet with them for input on when and where to have our reunion this year.

Forty-five years ago our lunch costs 25 cents, or we could walk downtown where Kermit Combs had a little grocery store. I think this was where Cut Away is now. For 25 cents I could get a pop, bag of chips and a candy bar. Then we would walk back up on the hill and sit on the block wall and enjoy our nutritious lunch.

Those were the good ole days!

Birthdays that were posted on Facebook and celebrated past week were Betty Pike from Goose Creek on the 2nd and my first cousin, Kim Pennington Lucas, also celebrated on the 2nd. Kim’s brother David Pennington and his wife Tanis celebrated their wedding anniversary on the 1st. Helen Cooper’s birthday was on the 30th of January as was Jerry Lucas’s and Stephen Meade’s, or Brother, as he is more commonly known.

Okay, I will close this week by once again asking everyone to be in prayer for all those that have lost loved ones, especially our pastor, Bill Jones and his wife Sandy, and also Sandra Sexton Wilson.

Oma’s plea once again, you should go to church Sunday. My plea is if your church has services Sunday evening and throughout the week, you should be there then, too.