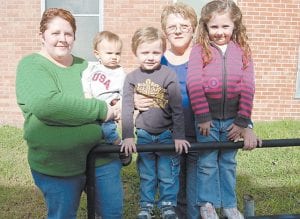 BATTLING BREAST CANCER — Danita Conn (left) is pictured with her three children, 14-month-old Logan, three-year-old Lincoln and six-year-old Jadeyn, along with her mother, Henrietta Wright. Conn, who was diagnosed with breast cancer on March 5, has kept a positive attitude and has continued to care for her children like her mother did when she was diagnosed with cancer 18 years ago. (Photo by Sally Barto)

Danita Conn has always looked up to her mother, Henrietta Wright, who was diagnosed with breast cancer when Conn was 11 years old. Wright kept a positive attitude and tried to continue with her normal routine as much as she could while going through treatments and surgeries to rid her body of cancer.

On March 5, the day that marked 18 years since Wright had a mastectomy, Conn was diagnosed with the same type of cancer her mother

“I knew if I could be as strong as she was, I would be okay,” said Conn. “I didn’t look at it like a death sentence. I know you can survive it. I am okay. I am fighting it. It is treatable.”

Like her mother, Conn, 30, has stayed strong and has continued living ing through surgeries and treatments.

Conn got out of bed on mornings she didn’t feel well, fixed breakfast and took care of her children, six-year-old Jadeyn, three-year-old Lincoln and 14-month-old Logan.

“You don’t let it overcome your life,” said Conn. “The first three rounds (of chemotherapy) I would be sick to my stomach for a few days. I would be tired. I would want to take more naps than normal.”

Conn didn’t want to miss any special moments with her children.

“It’s like she doesn’t have time for the cancer,” said Angela Hatton Mullins, a friend of Conn. “She’s always smiling.”

She continued to take Jadeyn to dance lessons and soccer practices.

“We did it all,” said Conn. “I never stopped. It’s not affected their lives so far.”

Conn said that small children don’t understand what cancer is so she and her husband, Jason, explained it as simply as they could.

“We explained that Mommy is sick and her medicine will make her hair fall out,” said Conn.

Conn said then her children kept asking when her hair was going to fall out.

“You can’t hide the realities of life from them,” said Conn. “You can’t hide it when your hair is falling out. When they get older and realize what Mommy went through they may have more questions.”

Conn remembers what it was like when her mother had breast cancer.

“When my mom had it I was 11 and it was scary,” said Conn. “”I knew it was hard. It was really hard when her hair fell out because everyone could see that. My mom didn’t stop.”

Con said her mother still went to the grocery store and wore turbans in public.

Conn said she doesn’t want a “pity party” either.

“She is the most inspiring person because she has refused to accept sympathy from anyone,” said Mullins. “She has been so strong. She doesn’t let anyone feel sorry for her.”

Pam Anderson, a close friend of Wright, drove Wright to her treatments 18 years ago and sees similarities in Wright and Conn.

“Danita is just like her mother,” said Anderson. “They both are remarkable women.”

Conn and her family were living in Dandridge, Tenn., when she noticed something unusual with her left breast. She was breastfeeding her son, Logan, who was seven months old and thought she had a blocked duct, which she had experienced once before on her right breast. She ignored it at first but then had it examined by Melissa Newell, a certified nurse midwife at Mountain Comprehensive Health Corporation (MCHC), on Feb. 23.

On March 5 a needle biopsy was done in Lexington.

“I was told that day they were 90 percent sure it was breast cancer,” said Conn. “I still cried because you have that 10 percent chance.”

“The hardest thing for me is my children,” said Conn. “That is what I cry about. To think of your children ever having to go through that is hard.”

Conn only had two weeks to stop breastfeeding. She said it was difficult finding a bottle that her seven-monthold son would take.

“I sat and cried because breastfeeding is the best thing,” said Conn. “It’s such a bonding with the baby.”

Jason Conn was working in a zinc mine in east Tennessee and was one of about 450 people who were laid off from their jobs.

Jason Conn found a job with TECO in Perry County and the Conns moved to Sandlick on March 21. Danita Conn began her first round of chemotherapy on March 24 at Central Baptist Hospital in Lexington.

“Life can change in an instant,” said Danita Conn. “It’s been a very hectic year for us.”

Anderson said like her mother, Conn has been determined to beat breast cancer.

“Every step that has been a challenge for her she has hit it head on,” said Anderson. “It has been amazing to watch. She is an example for all of us to follow.”

Danita Conn faced many challenges this year but for her the toughest challenge was when she had a mastectomy.

“To me that is part of being a woman and I had been breastfeeding and to lose it was hard,” said Conn.

During the time Conn was in Lexington for a mastectomy her daughter’s first tooth was loose and Conn was thankful the tooth didn’t come out until she returned home.

“I was worried about missing the tooth fairy,” said Conn.

After surgery she could not pick up her baby for almost two weeks and had to be careful when she held him.

Losing her hair wasn’t the toughest part for Conn.

“I did not cry one time losing my hair,” said Conn. “If I was in public I would wear a turban.”

“Even with the kids I would joke about not having hair,” said Conn.

When her hair started to grow back it came in white.

“You do take things for granted,” said Conn. “You realize how strong you can be. You don’t know what you can go through.”

Conn said her cancer was treated quickly after she found it at an early stage.

“We caught it early,” said Conn. “It was aggressive because it was in two spots.”

Conn thinks it is important for women to perform breast self-exams.

“Especially young women think it can’t happen to them,” said Conn. “I know I have a family history of it but my mom didn’t.”

Conn said she, her mom, two cousins and her husband’s aunt all detected the cancer.

“Women should take an active role in their health,” said Conn. “You have to fight and say this is my body, my life and I want something done. You can’t let it get you down. You have to keep fighting.”

Conn said she has realized how lucky she is and that people care about her.

“You realize how many people in the community and family are helping you,” said Conn. “I had prayers from so many churches. People prayed for me all over this county. I think that helps.”

Conn said she can always count on her family for love and support.

“My husband was always there,” said Conn. “I had support from family.”

Anderson said Conn’s support system has been a crucial part in her fight against cancer.

“She can’t help but be strong because she has so much help,” said Anderson. “Everyone is determined that she is going to get through this.”