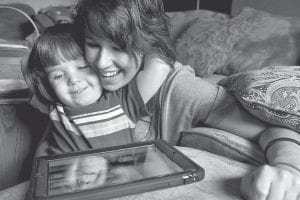 Grady Oathout, 3, embraces his mom Tara Oathout, as they play together on an iPad. Tara says her son, who has autism, was trapped in a world to himself, unable to communicate his desires to his parents. Oathout says with the use of the iPad, Grady can tell them what he wants and how it feels. Tara has founded a group called Loud Mommy Ministries to get iPads into the hands of other parents with autistic children. (AP Photo/Peoria Journal Star)

Tara Oathout couldn’t believe it. Her son, Grady Oathout, who will turn 4 in August, was asking for fruit and they had just gotten back to grandma’s house after lunch at an Italian restaurant, where he had eaten more than anybody at the table.

“He’s always hungry,” said Tara Oathout as she walked into the kitchen to fetch him something to eat. “Amazing.”

Actually, it was amazing, but not only because he wanted more food so soon after a big lunch. Grady, who has autism, didn’t ask his mommy for a banana in the conventional way by activating the anatomical mechanisms that produce human speech. Grady doesn’t talk. He asked by using his Apple iPad.

“How about a banana?” Tara Oathout asked, offering a chunk to Grady.

He smiled, pushed the banana into his mouth and instantly returned to the electronic device that has, in ways both large and small, opened lines of communication that those who love him once feared were closed off for life.

“From the moment you know you’re pregnant, you have a dream for your children. What they will experience. What they will accomplish. Autism takes a huge chunk out of that dream,” Tara Oathout said. “For us, the iPad brings some of that dream back. It’s as much for me as it is for him.”

The profound transformation in the Oathout household, as Grady slowly began to reveal his thoughts and feelings through his iPad and its software, triggered a transformation in Tara Oathout herself. She is now dedicated to getting the same device in the hands of other families like her own — families who are struggling with the often overwhelming burdens, challenges, costs and mysteries that a child with autism brings into a home.

“I want other people to experience what we have experienced,” Oathout said.

She has created an online support group called Loud Mommy (loudmommy.com, “A Loud Voice for a Silent World”) and planned a musical revue fundraiser at Peoria Players on April 1 and 2.

“ That’s just the start,” Oathout said. “I’d like to grow this into something big.”

Grady was born nine weeks prematurely to Tara and her husband Floyd Oathout on Aug. 6, 2007, weighing 3 pounds, 14 ounces. When Tara first saw her son, the ignition turned on her newly developed mother’s intuition and a thought she wouldn’t share flickered in her mind:

Months passed and his development stalled. At 18 months, he was still not speaking and he was exhibiting several classic traits of autism: spinning, flapping his hands, staring for long periods at lights and ceiling fans. The couple had Grady assessed, and the word “autism” crept into the conversation. The day after his second birthday, Grady was diagnosed at Easter Seals with autism, a complex developmental disorder of varying severity that now affects on average one child out of every 110 births in the United States.

Oathout, who recently turned 25, immersed herself in treatments and therapies and in loving a child who would not love her back. Through her research, she learned that families were having success communicating with children with autism with an iPad, a handheld computing device. Oathout wanted one, but the cost, about $800 with the software she wanted, was prohibitive. The family was living paycheck-topaycheck, yet Floyd was earning slightly more than the cut-off to qualify for an iPad from a national program that was subsidizing the cost for needy families.

Undeterred and relentlessly resourceful, she posted a picture of Grady and her story on a fundraising Web tool run by Facebook. She received enough money to buy an iPad in 48 hours.

“ Money came from across the United States and around the world,” she said. “It was incredible.”

With the iPad in hand, Grady’s vocabulary moved almost immediately from zero words to 10 with the use of software called iCommunicate. The program is an electronic version of a therapy regimen called Picture Exchange Communication System or PECS. It’s a series of simple drawings; iCommunicate offers more than 10,000 different images that can help people who have trouble communicating locate and point to an image on the touch screen. The pictures illustrate a feeling, a need, or any of a wide range of other expressions.

Grady is already expert at navigating the touch screen, too expert in one area — they had to disable the YouTube app because he was fixated on looking at Mario of Super Mario Bros. video games. Somehow, the 3-year-old learned how to spell M-A-RI O to access videos.

“Before the iPad, he was nonverbal and showed little emotion,” Oathout said. “Now I get hugs and kisses.”

Though no study has been completed on the value of the iPad as a communication tool for people with autism, anecdotal reports abound.

“Children with autism usually love electronics, so it makes sense that an iPad would be interesting and fun for them,” Leopold said. “Moms can just flip it in a purse and have it available when they’re in the waiting room at the doctor’s office or anywhere they happen to be. There’s not been research, but it seems like it’s a valuable tool.”