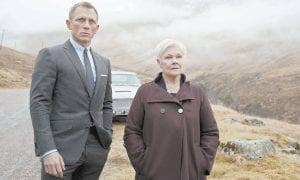 Daniel Craig as James Bond, left, and Judi Dench as MI6 head M, in a scene from the film “Skyfall.” (AP Photo/Sony)

Nothing is so much of a boys’ club as a James Bond movie. That is, except when Judi Dench is on screen.

As MI6 head M, Dench has been the Bond matriarch: the strong-willed, nononsense mainstay of feminine authority in a movie franchise that has, more often than not, featured slightly more superficial womanly traits.

“Skyfall” is Dench’s seventh Bond film, an unimpeachable reign that has encompassed both the Daniel Craig and Pierce Brosnan eras of the British spy. For a number of reasons, “Skyfall” is her most notable Bond film. For the first time, Dench isn’t just dictating orders from headquarters, but is thrown directly into the action when a former MI6 agent (Javier Bardem) is bent on revenge against her.

“It’s very nice to be out from behind the desk,” Dench said in a recent interview by phone from London. “It’s extremely nice to get a go in the field, as it were, and get a bit of the action. It made me feel very grown-up. It’s not just the fellas who are spinning about and shooting guns — I get a go.”

As soon as Dench entered the world of Bond, she made it clear she was a force to be reckoned with — certainly not one that some gun-toting playboy would push around. Introducing herself to Bond in 1995’s “Goldeneye,” the bourbondrinking M promptly informs Brosnan’s Bond that she isn’t a “bean-counter,” as Bond admits to thinking.

“Good, because I think you’re a sexist, misogynist dinosaur,” retorts M. “A relic of the Cold War, whose boyish charms, though wasted on me, obviously appealed to the young lady I sent out to evaluate you.”

She then states she has “the balls” to send Bond to his death, if need be.

Partly because of that scene, Dench considered the role a “cracking” one. She says she didn’t then realize the import many would assign to a woman playing M, or the length that her service would turn out to be. Her husband, the late Michael Williams, cheered the decision: “He thought living with a Bond woman was very exciting.”

So over seven films and 17 years, the 77-year-old Dench — a revered Shakespearian actress of the British stage and films such as “Notes on a Scandal” and “Shakespeare in Love” — has, like other legendary stage actors from Alec Guinness (“Star Wars”) to Ian McKellen (“Lord of the Rings”), become best known to many for a blockbuster movie franchise.

Dench inherited the role of M from Robert Brown, who played the character from 1983’s “Octopussy” through 1989’s “License to Kill.” Bernard Lee — whom Dench calls a hero of hers — initiated Ian Fleming’s secret service head, playing him for 11 films, from 1962’s “Dr. No” to 1979’s “Moonraker.” (John Huston and Edward Fox also sat in for M for a film each.)

“Skyfall” director Sam Mendes previously worked with Dench when he was a hotshot 24-year-old director mounting “The Cherry Orchard” in the West End.

“She was the first bona fide great actor I had ever worked with,” says Mendes. “I learned more from watching her, the way she worked, than I ever had before. She would never think of herself as a teacher. She has too much humility and too much grace to consider herself to be knowledgeable. But in fact, it wasn’t about what she said, it was about how she conducted herself, how she rehearsed, how she thought about the play, her dedication to the play and the audience, her work ethic.”

There is, though, another reason why “Skyfall” is a significant Bond film for Dench, though it’s one that needs to be forewarned by frantically waving one’s arms and screaming “spoiler alert!” — so proceed reading with caution.

“Skyfall” is Dench’s final Bond film. In it, she bequeaths the role to Ralph Fiennes. It has been a hard secret to keep, Dench says, especially to her 15-year-old grandson.