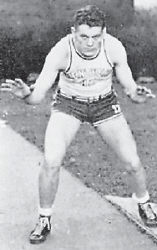 WHS Athlete listed in ‘Ripley’s Believe It or Not’

Sam Potter was a member of the Whitesburg High School 1931 football team that went 11-0, the first undefeated season in WHS history, and until one of the last games no team had scored against them. During the entire season, only Hazard was able to score one touchdown. This team scored 355 points and allowed its opponents only six points.

Mr. Potter received worldwide attention in 1931 when ‘Ripley’s Believe It or Not’ featured him as the nation’s leading football scorer. He had scored 234 points in nine games for an unbeaten Whitesburg High School team.

He was also one of a small number of people who lettered in football and basketball at the University of Kentucky. Sam also was an award-winning coach and a member of the Kentucky High School Athletic Association Hall of Fame.

He taught social studies and coached several sports at Lynch High School from 1944 to 1953. He was principal of that school from 1953 to 1960. He was superintendent of the Lynch Independent School District from 1960 to 1966.

His Lynch football teams’ record was 76-19-6. His teams won 30 consecutive regular season games. He was named Louisville Courier-Journal Coach of the Year in 1953 and was runner-up the previous year. He was coach of the East All-Stars, which upset the favored West, led by eventual Heisman Trophy winner Paul Hornung, 14-13.

Mr. Potter became superintendent of Shelbyville Independent Schools in 1966, and a group of Lynch educators followed him. He stayed in Shelbyville until 1974, retiring as the city and county school systems there were merging. He later became a construction consultant for Sherman/ Carter/Barnhart Architects in Lexington, traveling throughout the state to give advice on the construction of new schools, jails and other buildings.

The season was opened with Buckhorn, a team that had held its own with the best teams of this section. The score of 7-0 in Whitesburg’s favor shows that it was a tough battle, but with our boys rounding into shape they could not be stopped.

Whitesburg’s next game against Jackson was easily won by a score of 13-0, but they received a beating the following Friday against Benham, one of the strongest teams in eastern Kentucky. The score, after a hard-fought battle with Whitesburg decidedly the underdogs, was 19 to 7 in Benham’s favor.

Whitesburg’s next game was lost to Paris. Everyone expected an easy victory for Paris after the beating they gave the Yellowjackets at Paris last year. The game was played on a cold, rainy evening, but was fast and interesting. When the final whistle blew, the score was 6-0 with the home team holding the zero end of it.

Against Lynch, the Yellowjackets took a decided brace and showed a flash of the football they were really capable of playing. With Sam Potter hitting the line, the Lynch boys didn’t have a chance and the final score was 19- 0.

The Hazard Bulldogs, an old-time rival of Whitesburg, gave our boys a drubbing the next week. The Yellowjackets had looked forward to this game and throughout the session their aim was to bring about the downfall of the Bulldogs. Both the teams were in excellent shape and about evenly matched, but the breaks seemed to be against us. After three quarters of hard fighting with neither side scoring, it looked as if the game would be a tie, but in the last few minutes of play the Hazard quarterback slipped over a long pass to an end who went over the line for the only marker of the game and made the score 7-0 in Hazard’s favor. Despite the score, the Yellowjackets out-fought and out-played the Bulldogs throughout the game, gaining 243 yards to the Bulldogs’ 119. This game will long be remembered by Whitesburg sport lovers for it was in this game that 11 men fought their hearts out trying to defeat the hated Bulldogs.

Whitesburg is looking forward to 1931 as a banner year for the high school on the gridiron. The team of ’30 was young and inexperienced and none will be lost to graduation.

The basketball season of ’30 and ’31 was perhaps the most successful one enjoyed by the Yellowjackets in our basketball history. From a stiff schedule of 28 games against this and fine teams of other sections, the Jackets marked up 20 wins against eight losses, and scored 792 points against opponents who scored 456 points.

The season opened when the Jackets journeyed to Blue Diamond and brought back a victory of 44 to 20, but they were defeated the next night by Vicco by a score of 24 to 13. On their return game, Vicco found the Jackets in a revengeful mood, and after the game, found themselves on the short end of a 30-24 score. In the next week Carr Creek was given a similar dose and the Jackets chalked up their third win of the season. This game was the outstanding triumph of the entire season.

Male, of Louisville, came next, and being the strongest team on the entire schedule, their winning was expected, but not by so close a score as 24 to 20. The Jackets held the lead all through the game until the last few minutes of play when Male began long shots and took the lead. This should have been our game but fate seemed to be against us. Harlan and Fleming came next, and were easily defeated with big scores.

The Yellowjackets next journeyed to Benham, and were defeated 28 to 14, but they came to themselves in the next game and defeated Barbourville Baptist Institute 18 to 14. The next game of importance was played with London, the Jackets winning by the close margin of 31 to 29. Potter and Brashear shone in the game for Whitesburg.

The Jackets found Barbourville, Fleming and Stuart Robinson to their liking in return games and easily defeated all three, but met their Waterloo against Carr Creek, Harlan, Jackson and London. All four teams were defeated in the earlier part of the season and should have been swamped by the Jackets.

In the district tournament it was Whitesburg’s good fortune to draw Jackson, whom they easily defeated by a large score. But the Jackets met their jinx in the form of Stuart Robinson and were forced to the sidelines, after having defeated Stuart Robinson twice during the season. In last year’s tournament the same thing happened, and here’s hoping we can get rid of this jinx next year.

(The above articles were from the 1930 Black Kat)