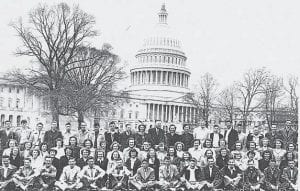 The newly-organized Whitesburg Band Club has 81 members and has set its goal to put 20 new instruments in the band to be rented to talented students.

The Junior Chamber of Commerce is donating the proceeds from “Laugh it Off ” to the band. Band patrons are canvassing the town asking for donations to assist their new project.

The trip to Danville did much for the morale of the band. It was fun being guest of the Danville Band. Whitesburg fans at Danville reported that our band gave its best performance this year, both playing and marching.

Let us boost the band and fill the existing vacancies, for it is said that a school and town can rightfully be judged by the kind of band it has.

On Monday, Oct. 17, Whitesburg High began their annual Halloween Carnival. The students got behind the drive with the spirit for which W.H.S. is famous. All classes elected their nominees for King and Queen. They were as follows, freshmen: Loretta Profitt and Burl Lucas; sophomores: Virginia Hollan and Jimmie Bert Tolliver; juniors: Bennie Faye Blair and Gene Giles; seniors: Geraldine Smith and Billy Ray Cooper.

When the final votes were cast, it was found that the sophomore class came out on top, putting both their King and Queen in. The sophomores had approximately $320. The senior class was runners-up. The total amount for the high school was $589.80.

The Prince and Princess of the grade school were Margaret Collier and R.T. Holbrook. The grade school worked very hard to get their nominees in. The total amount they raised was $603.95. The high school wishes to thank everyone who helped in the carnival.

Saturday, Oct. 2 9 , Whitesburg met and defeated a spirited Fleming 11 which put up a vicious fight throughout the game. With the exception of one time, Stapleton, Burns, and Jerry Tucker, were bottled up. Then the final whistle blew, it was Whitesburg 14 and Fleming 6.

The Glee Club girls, Mrs. Tolliver, and Mrs. Derrick, all went to Stuart Robinson Jan. 10, to give a concert for the entire student body and faculty. The Glee Club sang 12 songs that were divided into these groups: religious numbers, folk songs, and semi-classical music.

Between the last two groups the trios sang “Within a Dreaming Harbor.” Stuart Robinson seemed to enjoy the entertainment and to repay us, they are planning to send a folk game group to perform for us.

After the concert, the Whitesburg girls were invited to the campus store and told to get anything they wanted to eat without paying for it.

The Yellowjackets on Jan. 3 defeated First Creek by the score of 59 to 54 in one of the most thrilling games of the year. It was the sixth win of the year against one defeat.

On Jan. 6, the Yellowjackets scored at will as they defeated Kingdom Come by the score of 63 to 33. Everyone on the team played in the game. The Yellowjackets started off fast and never let up.

Whitesburg and Robinson Creek won the two opening games of the 14th Regional Basketball Tournament in Whitesburg Wednesday night of this week. Robinson defeated Carr Creek 48 to 40 and Whitesburg ran over Powell County 60 to 39.

Tonight’s games (Thursday) will be played between Hazard and Jenkins and Hazel Green Academy and Hindman. Friday’s games, the semi-finals, will be between Whitesburg and Robinson and between the winners of tonight’s two games.

On Wednesday night at half time, Powell County was leading Whitesburg by 24-23. The Yellowjackets came back stronger in the second half and began to pull away rapidly as Jimmy Bert Tolliver, forward, collected 15 points. Tolliver was high point man with 25 points. Leonard Duncil, forward, as well as playing a great floor game, contributed 20 points to the Yellowjacket score. Dean Nease, guard, was outstanding in all-around action and Carol Sexton, forward, was excellent in taking rebounds, accounting for 10 Whitesburg points.

Bobby Stout, Whitesburg center, had four fouls on him at the end of the first half and didn’t see any action at all in the second. Ronnie Kincer, guard, played a good floor game.

(The above article appeared in The Mountain
Eagle
March 9, 1950.)

The staff, students and faculty wish to congratulate the football boys who earned sweaters and letters this year. The sweaters have been ordered and the boys are looking forward to receiving them. To receive one requires hard work, but it is a great honor. Those who have earned them are James Gose, Steve Harris, Bobby Maggard, Ronnie Kincer, Doug Polly, Ralph Palumbo, Mansie Brown, Porky Polly, Harrison Garrett, Carl Collins, Raymond Harris, Eddie Minns, Dean Nease, Johnny Banks, Tommy Whitaker and Robert Caudill.

Term’s end activities at Whitesburg High School will begin tonight (Thursday) with the Junior-Senior Banquet at the gymnasium and will terminate Friday, May 19, when 96 seniors receive their diplomas at graduation exercises. The schedule of activities is as follows: May 4 – Junior- Senior Banquet, 7 p.m., gymnasium, May 8 – Mrs. Tolliver’s recital, 7 p.m. May 9 – Martha Ann Holbrook’s recital, assisted by Barbara Lewis, 7 p.m. May 11 – Piano contest in Lexington. Two students and two trios rating superior at the Pikeville Musical Festival will go. May 13 – Mr. Hugh Adams’s music recital, 7 p.m.

During commencement week, there will be an art display by students. The exhibits will be shown in downtown store windows. Miss Pauline Amburgey is the art teacher. The entire junior and senior classes of Whitesburg High School have been invited to be guest of Sam Isaac at the Alene Theatre this evening (Thursday). After the Junior- Senior Banquet, the entire group may attend the movie “Dangerous Profession” starring Pat O’Brian, Ella Raines, and George Raft. It is hoped that this will become an annual event, Mr. Isaac said.