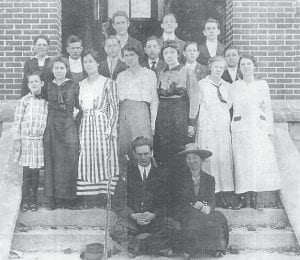 As the first principal of the joint Whitesburg Graded School and Letcher County High School, he was elected unanimously by the board of trustees on July 28, 1914. He was hired as high school teacher and paid a salary of $90 a month for 8 months. He was the first head of the school to have an assistant, who was Nancy Jane Huff. The following course of study for the high school was adopted and ordered certified to the county superintendent and sent to the State Board of Education for approval: first year — rhetoric and composition, algebra, Latin, physical geography, ancient history, agriculture, drawing; second year — American literature, algebra, Latin, medieval and modern history, botany, agriculture; third year — English literature, plane geometry, physics, English, history, Latin; fourth year — English classics, solid geometry, chemistry, American history, Latin, political economy, plane trigonometry, civics, German, pedagogy, geology. 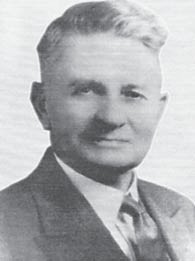 Until the school was ready for occupancy, the high school classes were held in the basement of the First Baptist Church. Professor Jerome Eastham remained as high school teacher and principal from 1914 to 1917.

The school census revealed in 1915 that there were 97 males and 110 females of school age in the Whitesburg Graded School District. Most of them were of grade school age, because the high school classes were still very small. The 1915-1916 school year was scheduled to begin the last Monday in August. It would remain in session for four months, adjourn until January 3, 1916 and continue four more months.

(The above article from “A History of WHS” by Faith A. Bowling.)

The first class to graduate from Whitesburg High School was the class of 1916, and it consisted of the following students: J.L. Hays, who became a lawyer and judge of the Letcher Circuit Court; G. Bennett Adams, who later was a well known Old Regular Baptist preacher, county judge and historian; and Dr. J.M. Bentley, who practiced dentistry in Whitesburg and Neon for many years.

The second graduating class (1917) consisted of Miss Ethel Burton, Henry Harrison Gibson, Miss Allie Fields (later Mrs. Lawrence Lewis) and Prof. E.B. Hale, father of Herman Hale and Mrs. Albert Jones of Whitesburg. Professor Hale had been teaching for several years but had not previously obtained his diploma. The original high school building was under construction but was not put into use until the next year.

Mr. Hounchell would have been the first principal in the new school building in 1918. The stone foundation for the school had been laid prior to May 1914. A two-story brick building was constructed on the foundation on College Hill.

(The above articles from an earlier Mountain Eagle.)
Henry Howell Harris

When Professor Harris first arrived at Whitesburg High School in 1919, there were only about 10 high school students. The school grew up with the little town. Every year after 1919, students graduated and went on to college or to their chosen work.

Prior to July 1, 1922, a teacher could be certified without any high school credit by passing an examination. After July 1, 1922, all teachers had to have a minimum of one year of high school. By 1923, Whitesburg was finally an accredited school.

The enrollment for 1924 was over 100 in high school. Classes were crowded and students were expected to pass an examination if they wanted to be accepted in high school.

Early in the year 1926, the school was overflowing and attendance continued to increase. John D. Sergent reported the following to The Mountain Eagle:
“I paid a visit to the City High School and believe it to be the best school in the mountains. The faculty and student body are equal to any school. Professor Harris was teaching a class in algebra, and I have never seen a more interested group of high school pupils.”

(This article from “A History of WHS” by Faith Armstrong.)