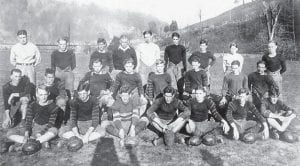 The whole force of the Whitesburg School participated in a parade on Monday, November 11, 1929 at 1:00 in commemoration of Armistice Day. The parade itself was a splendid success, being marked by countless colored caps, worn and made by the grade students. The body of students passed twice down Main Street, circling the courthouse, then returning to the new auditorium in the grade building, where an exceedingly interesting program was put on by the grade students.

In the early part of the program, J.L. Hays, of this town, spoke on Armistice Day, and commemoration of the closing of the late tragedy. It was a splendid address.

Mr. Ison, principal of the graded school, closed the program with a splendid talk in honor of the occasion.

A great note of interest was the large gathering of townspeople at the program, showing their interest in the school by attending and backing the school in a program of this kind.

The senior class has acquired a new member. Elmer Crites, who is returning to finish his senior year with us. We welcome him and wish him luck among us. Mr. Ford has also joined us.

Quite a number of students and townspeople, as well as others interested in the Whitesburg‘s athletics accompanied the team to Hazard to witness the Hazard-Whitesburg football game.

The townspeople and students again showed their interest in the high school when they took as many backers to Jenkins as Jenkins had, and in return the Whitesburg boys played their best game of the season, even though they did not win, but tied.

William Vermillion, accompanied by his father and brother, Paul spent the weekend of November 10 at Harrogate, where his sister, Miss Virginia Vermillion, former student and graduate of this school is attending Lincoln Memorial University.

Misses Mabel Blair and Nassarita Hayes, graduates of ’28, visited in our town a short while back. They are both attending Eastern State College.

Wednesday morning, November 13, Mr. Hale, our principal, addressed the Hi-Y boys at their regular meeting on the subject “Make the most of the present.” In his talk, he warned the boys that a great deal depended on their present ways as to what they would do in the after life.

Mr. Hale closed his talk with a quotation which said, “Instead of waiting till the sweet by and by, let’s make the most of the golden now and now.”

The address was certainly enjoyed by the boys, for most of them realized the truth of the statements.

After a short business session, the meeting was adjourned.

Seniors — “Who are the seniors?” The girls in bright colored smocks and boys in blue overall suites. These they wear three days a week. This shows our cooperation. All the boys fell in line with the exception of two, while all the girls agreed to this plan.

We’re counting the days till our sweaters and rings arrive. “It won’t be long now.”

Seniors are trying hard with the aid of their wonderful sponsors to keep the “Black Kat” going and out on time, but we need all the student help. “Are you helping?”

Sophomores — The sophomores have been telling you all year what a great class we have. Now we are inviting you to come and see for yourself. Each Thursday, we have a very interesting program along with the other duties of the class. Visitors have been very few this year, and without the parents and town to back a school, it is destined to go down in failure before long. This invitation not only includes those who live in Whitesburg but those of the neighboring districts. Leave off your work some Thursday morning and pay us a visit. We hope that you all may read this and gladly answer to its summons.

Freshmen — The freshmen class is still pushing forward. We have the largest freshman class Whitesburg High School has ever had and the best.

Three of our classmates have dropped out. We were sorry to lose them. They were Beatrice Shepherd, Clayton Day and Nickie Holbrook. But we have also gained another student, Forest Shackford.

Our sponsors, Miss Cook and Mr. Combs, show real interest in our class, and we think with the backing of our sponsors and the other members of the faculty, we can reach the goal successfully.

He started on a run around the end, was tackled from the rear, The right guard sat upon his chest, The fullback on his ear. The ends laid down upon his legs, The rest upon his face. They then called the Coroner to sit upon his case. — Woodford Webb.

I WONDER WHY — Herbert Webb doesn’t wear overalls to school; Ida Hart sold so many ads this month; so many girls hang around the physics room; Hazard and Whitesburg both tied with Jenkins; Fred Day doesn’t join the army and wear “leggings;” Edith Baker is getting so good looking; Elmer Bert came to school this time of the year; the freshman are still green; Coach Combs is so popular with the ladies; Bernice Flynn stops at the depot every day at noon; Dave and Fay sit together in English class every day; Violet Parsons has a new crush.