Moments and Memories of Whitesburg H.S. 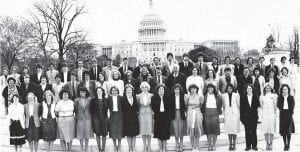 Fifty-five seniors from Whitesburg High School were among the countless students who descended upon Washington, D.C. during the first week of April. The seniors were just in time to see the blossoming of the cherry trees and to enjoy some beautiful spring weather.

The seniors departed from School Hill at 7 p.m. on Easter Sunday and returned at 10:30 a.m. on Thursday, April 7, with sore feet and tired eyes. During their three-day stay in our nation’s capital, the seniors managed to tour three monuments, three federal government buildings, the White House, the house where Lincoln died, Ford’s Theater (where Lincoln was shot), Embassy Row, the Smithsonian Institution, the Iwo Jima memorial, the Vietnam War memorial, the graves of Robert and John F. Kennedy, the Custis Lee mansion, and Arlington National Cemetery.

On Tuesday night the seniors attended a play at the John F. Kennedy Center, “Make and Break”, starring Peter Falk.

Among the favorite sights the students saw were Archie Bunker’s original chair in the Smithsonian, one of the FBI’s crime labs, the original capsules from several space missions and the Wright Brothers’ plane in the space museum, the only panda bears in North America at the National Zoo, the Red and Blue Rooms of the White House, the Gothic architecture of the National Cathedral, and the Washington Monument. By the end of each day, the favorite sight of nearly all the seniors was the sign of the Imperial 400 Motor Inn where they got a minimal amount of sleep.

The faculty members who came along for the ride were Mr. Holbrook, Mr. Slone, Mrs. Cassidy and Mrs. Yinger. All four appeared to have a good time, but not nearly as much fun as the seniors had.

After a three-hour boat ride with foreign exchange students from Germany and Japan as well as seniors from Michigan and Maine, the seniors boarded the bus for home late Wednesday night. Most people were so tired that they slept through most of the trip home. Most seniors agree that although the trip is tiresome, it’s well worth the missed beauty rest. Senior trip is one event this senior is not likely to forget and one I wouldn’t have missed for the world. It was well worth my $100 and ten magazine sales.