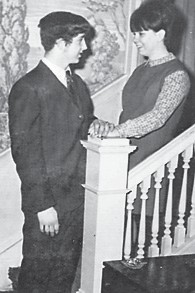 “Love is A Success”

The W.H.S. senior class presented the annual Fall Festival “Love Is All Around”, to the grade school and high school students on Friday, November 15, 1968. Following the day performances the program was presented again at 7:30 p.m. Senior sponsors, Mr. C.B. Banks and Mrs. Juanita Day along with the help of Senior Class President Jeannie Price, worked very hard to make the festival a success. Credit goes to Susan Crawford and Larry Craft for making the psychedelic stage decorations. The Kat’s favorite acts included Vanessa Campbell, who sang her own composition, the gymnastic team, Martin Mullins and Charles Howard, and The Something Else. Congratulations to the seniors for having a successful festival.

Finally after much planning and working, that special day came when all the seniors were excited and anxiously waiting to get their class rings. On November 23 at 7:30 the doors were opened for WHS students and their guest. A band from Cumberland provided music and entertainment which was enjoyed by all. Jane Cox and Arnold Amburgey were crowned Ring Dance King and Queen. Rings were given out by senior sponsors, Mr. Dan Polly and Mrs. Juanita Day. The dance was a success since everyone seemed to have fun even those who didn’t have new rings to show off . 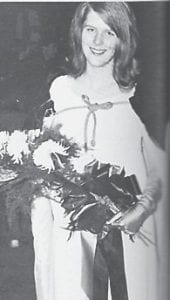 “Kissie” gets her crown

The W.H.S 1968 Homecoming Coronation was presented November 1, at 7 p.m. before the Whitesburg Johns Creek game at the W.H.S. athletic field. The outgoing queen of ’67, Margaret Hammonds, was present to pass on the title to the Homecoming Queen of ’68. The queen and her court consisted of the four candidates, their attendants and escorts. The student body was absorbed with suspense wondering whether the senior candidate, Karen Kincer, the junior candidate Patsy Adams, the sophomore candidate Rhonda Caudill, or Maguana Blair, the freshman candidate, would be crowned as their queen. It last was announced and the crown and title of W.H.S. Homecoming Queen ’68 was presented to the Senior Candidate Karen Kincer. 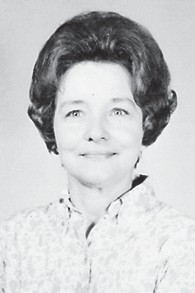 The Homecoming Parade took place on November 1 at 2:30 p.m. Entered in this year’s parade were 16 floats, sponsored by school clubs, Girl Scout troops, sororities, women’s clubs and men’s clubs. Judges chose four outstanding float in two categories, these categories being school competition and competition for civic organizations. The theme this year was “Movies-Old and New”.

In the school competition, the FHA entered the winning float, using the movie ‘Ma and Pa Kettle’ as their theme. Winning second place was the FBLA float, ‘Gone With the Wind’.

In the competition for civic organizations, ‘Doctor Zhivago’, sponsored by the Beta Sigma Phi was the winning float. The Girl Scout Troop won second place with their float ‘Mary Poppin’s.

The Whitesburg High School Marching Band has grown in size as well as musical ability this year.

The band consists of 42 members and for the first time in many years, a drum major, Larry Mullins, a junior at W.H.S. Whitesburg High is very fortunate to have Larry as a drum major; he does a very good job in leading the band.

The band is trying hard to back the Yellow Jackets at all of their games, but they need more spirit. Without spirit and a close relationship with the director, the band cannot grow.

With only six seniors and two B-Band Classes we look toward a promising future for the band.

The French Club met Thursday, December 5. The members drew names for secret Christmas pals. Mrs. Banks, the sponsor, announced that all students planning to go to Europe this summer were to watch the special on Michelangelo on the ABC television network Thursday night. They were then asked to write a report on the program.

October 31, 1968, was the final day Mrs. Susan Thomas headed the Home Economics Dept. of W.H.S. Mrs. Thomas has been our home ec teacher for the 1967-68 school year and the first six weeks of this year. Mrs. Thomas left the United States Nov. 1, to be with her husband, Delano Thomas, a former teacher of W.H.S. who is now serving with the U.S. Army in Germany. Mrs. Thomas will be greatly missed by all for her efforts in helping Homecoming ’67 and ’68, F.H.A., and the Home Ec. Dept.

Troy Randall Breeding has been selected as the winner of the annual conservation essay contest at Whitesburg High School. The topic of this years essay is “Fish and Wildlife — Its Effect on My Community.” Breeding’s essay will represent W.H.S. in the State Contest; his essay was chosen as the best from 830 entries at Whitesburg High. Randy, a freshman, is the son of Mr. and Mrs. Van Breeding of Isom, Ky. He is an honor student, a member of the band and the Frosh. Basketball team.

According to the W.H.S. tradition, the Yellow Jacket is dedicated to a rare individual who has contributed much to the life at W.H.S. This year is no exception.

An encouraging smile, a helpful word, a willingness to help, and a great sense of humor are some of her traits. She has that unusual ability to make something out of nothing.

We owe much to this outstanding person, and as a token of our esteem and appreciation it is a great honor that we dedicate the 1969 Yellow Jacket to Juanita Day.