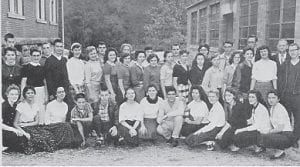 After a three month vacation, the students of W.H.S. once more ascended the steps which lead to the “Hill of Knowledge.” I think for most students it was great being with old friends again. On Friday, Aug. 23, 260 freshmen registered. On Monday, the upper classman registered. There are 219 sophomores, 206 juniors, and 138 seniors, for a total of 823 students.

On Monday after registration was completed there was a general assembly in the gym. Mr. Burkich, our new principal, welcomed everyone after which Rev. Clel Rogers spoke.

We regret the loss of some of our former teachers, but I’m sure that our new ones are as wonderful. Miss York, Mr. John A. Hall, Mr. Armstrong, and Mr. Secontine are off to a good start with their classes.

Our drum majorette for this year is Elana Holstein. Elana is a senior and has been one of our majorettes for several years. Congratulations, Elana. We also wish to congratulate Barbara Bentley, Sandy Gibson, Rosemary Collier, and Carol Conatser for being chosen to join Carol Brown as this year’s majorettes.

Looks like the Yellowjackets have come back for another big season in football. On Aug. 26, our team brought to WHS a victory in the first game of the year. They defeated Wallins 13 to 0. Then, on Aug. 30, they played a tough game with M.C. Napier, but won 9 to 6. Our team’s captain is Daryl Stidham; and our cocaptains are Arnold Enfusse and Tommy Fields.

Kaye Hale and Lilly Jane Collins were elected as the new cheerleaders. They are joining Donna Spangler, Wanda Lee Collier, and Wanda D. Rodgers, former cheerleaders for the Yellowjackets.

Everyone is happy with the improvements on the school building. The painting and trimming look nice. The cupola on top of the building had to be removed because of its unstable condition. However, the bell, which holds many memories for our past graduates, will be painted and kept as a token of sentimental memories.

Speaking of memories, there is now a Beta Club bench on our front campus. The bench was dedicated by the Beta members of 1956-57. “ON THE HILL” by Wanda

On Sept. 10, our B Team played Cumberland’s B team on the Whitesburg field. The Yellowjackets won with a 19-13 victory.

Friday the 13th proved to be a very unlucky night for the Yellowjackets. Our players traveled to Benham, where they tangled with the Benham Tigers on a very wet and muddy field. The score of the game was 32-0 in Benham’s favor.

Our band paraded through town on Saturday morning. The parade represented the campaign for the selling of Band Booster tickets. The tickets are still on sale and can be purchased from any band student.

There will be a pep rally beginning at the Rainbow Grill Thursday at 6:30 o’clock tonight (Thursday). The band, cheerleaders and fans will parade through town doing the snake dance and yelling, after which there will be a bonfire on the hill. We hope the coaches and football team will be present.

On Sept. 4, the Beta Club held is first meeting. There were 15 old members present. The Beta officers for the coming year were elected. President is Rosemary Collier; vice-president, Dan Polly; secretary and treasurer, Sarah Jane Hall.

The seniors had their first class meeting on Sept. 5. Mr. Blevins, representative of the Cowl Magazine Company, talked to us about our annual magazine drive. Our goal this year on the magazine drive has been set at $1,500. The money will help take the seniors to Washington at the end of the year.

At activity period on Sept. 6, the student body met in the gym for a pep meeting. I think that on the whole there was more school spirit shown at that one pep meeting than there has been at the meetings of the past four years.

The Yellowjackets traveled Sept. 6 to Paintsville, where they played a tough ball game with the Tigers. However, for Paintsville it was a hard-fought victory of 12-7 over the Jackets.

ON THE HILL” by Wanda

The Rev. John R. Howard of the Presbyterian Church and Evangelist William E. Hill of Hopewell, Va. brightened our week by being our guest speakers for assembly on Wednesday, the 18th.

Friday, the senior class met to consider ways of raising money for the senior trip and to elect class officers. Our president is Sarah Jane Hall, vice-president, Tommy Fields, and secretary/treasurer, Janice Fleenor. After all the money was collected and totaled we found that we lack approximately $500 toward our goal of $1,500. Selling magazines is one of our best ways of making money, and I think our goal can be attained if we only try a little harder!

Those who received ballpoint pens as salesmanship awards for the highest magazine salesman for each day in the past two weeks were Janis Bentley, Ethlene Frazier, Kathryn Brown, Martha Adams, Vina Stamper, Sarah Jane Hall, Tommy Fields, and Wanda Collier.

Monday was a big day for the senior band members. At activity period, they met in the band room and were measured for their longawaited band jackets. The jackets should be in within six weeks; they will only be small thanks for the hard work that most of the following students have done in the Whitesburg Band in the past as well as the present year. They are Elana Holstein, Carol Brown, Allene Gibson, Jo Ann Adams, Jimmy Halcomb, Bob Stansberry, Rosemary Collier, Dan Polly, Charles Kincer, and Joe Gentry.