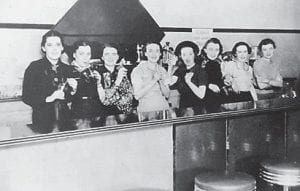 It seems that every generation of young people has its favorite “hangouts” to gather after school and on weekends to socialize with their friends, and enjoy the snacks, dancing and music. It might have been the nickelodeon, the jukebox or even a live band. One of the more popular gathering places in the late 1930’s and the 40’s was The Sweet Shop.

The Sweet Shop, started by Nan Lou Salling Lucas (later (Gordon) Lewis and then (Walter) Enlow) in about 1937-38, was located on Main Street in Whitesburg in a building adjoining the present Dawahare’s store. A typical “soda fountain”, it served sandwiches and drinks, but the primary attraction was socializing and it did allow dancing. It attracted the older high school students as well as the younger generation who were out of school and some who were married. It thrived in that location for several years. In the late ‘40s, the business was sold to Clara Williams who operated at that location for a period of time. Clara Williams later closed the Sweet Shop and opened the City Café in a space adjoining the Daniel Boone Hotel lobby.

The following article was written by Elizabeth “Dot” Webb. It is a recollection of her memories of the Sweet Shop when she was a student at Whitesburg High School and a member of the 1938 Class:

In 1934-35, the Whitesburg High School had no lunchroom so many of the students left the school hill to eat downtown or brought their lunch with them. One of the favorite student lunch spots when I was a freshman and sophomore was operated by Mrs. Halcomb, the mother of Clara Halcomb Williams and Maggie Halcomb Norman. This restaurant was in an old hotel or boardinghouse building just across and next to the river from the L&N depot. It had a porch that hung out over the river at the rear. I don’t recall if she operated the hotel or just the restaurant, nor do I remember the name of it. I think that Maggie and Clara helped with the restaurant. This restaurant was popular became of its good food and the location close to the school. (Later, a Mr. Morgan had a shoe repair shop at this location although I don’t think it was the same building. Then I believe Mr. Back may have operated that shop. C. B. Bradshaw had a jewelry store there.)

About 1936 or 1937, Nan Lou Salling Lucas (Mrs. Willie Lucas at the time) opened the Sweet Shop in a building next to Dawahare’s Department Store. Willie Lucas owned the building. It was a lunch place that had sandwiches, short orders and a soda and sundry fountain. It also had a nickelodeon in the rear and Nan Lou allowed the students to dance there. The nickelodeon cost a nickel to play and I assume that is how it got its name.

After Nan Lou was divorced and remarried to Gordon Lewis, in about 1943 or 1944, she may have sold the business to Clara Halcomb Williams who continued to operate it as the Sweet Shop for a short time. Clara then moved the business up the street to the left half of the Daniel Boone Hotel space. The restaurant name at the new location was changed to the City Café, which she operated for several years. Clara later moved her restaurant business to Railroad Street across from Lewis Wholesale and the old First Baptist Church.

The Daniel Boone Hotel also had sundry shops during later years, one owned by Lee Adams and another owned by Woody Dawahare known as Woody’s Sundries, but that was probably in the early ‘50s. Joe I. Day once had a restaurant just up the street and Judge Sandy Adams also had a restaurant in that same area near the old Kentucky Theatre sometime during those pre-war and World War II years.

In the ‘40s and early ‘50s, there were other lunch places in the area near the old Alene Theater and on the Railroad Street corner. And, the Coney Island Restaurant that I believe belonged to Tom John was located on the corner by the river, across from the Methodist Church. Roger’s Dairy Bar was also a student hangout in the 1950s when my sons were in high school.

Mae Amburgey remembers the Sweet Shop as the place to get the best grilled sandwiches and shakes. It was remembered as the place to dance to the jukebox. One table up front was usually occupied by several ladies who liked to sit by the window and socialize. She recalls skipping breakfast at home and stopping by the Sweet Shop to get one of their combination sandwiches, which consisted of egg and ham prepared on their grill.

Recollections of the Sweet Shop by Judy Vermillion: The Sweet Shop was a great hangout for people of all ages and especially high school kids (we weren’t called teenagers back then). Always sitting in the booths that were in the back — the tables and stools were up front. Jitterbugging to the jukebox! Wonderful grilled ham salad sandwiches. Chocolate milkshakes. Asking for extra nuts on the hot fudge sundaes. Seeing Jesse Lewis, Lottie Mae Amburgey, Clara Williams and her daughter Peggy among others, sitting at the front tables.

Herb Caudill remembers: Around 1942, Nan Lou Lucas (later Enlow) ran the Sweet Shop, later owned by Ambie Mercer and then Clara Williams. He recalls that there were tables in the back where patrons would gather to play Rook and couples would be dancing to the jukebox. The older ladies would sit at the front tables on Saturday afternoons and socialize. Herb recalls that it was “just a great place to hang out, for the young and old alike.” The Sweet Shop has a lot of fond memories for those that were fortunate enough to be around at the time.

Nina Jarrett Craft recalls when she and her husband Archie were first married, they lived in one of the apartments above the Sweet Shop. Her neighbors in the other apartments were Ruth Rice and Emery and Ethel Lewis. Nina remembers when she and Archie would have friends over to play cards, they would walk downstairs to the Sweet Shop and get a pitcher of cherry Coke, which they thought was the best fountain drink around.