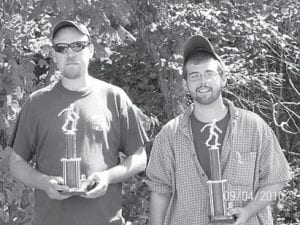 TOURNEY WINNERS — Finishing first in the Isom Days Horseshoe Tournament were (above) Eddie Stacy and Adam Stacey. Jody Mitchell and Tim Mitchell were second, and Steve Cornett and Pauline Cornett were third. Alvin Slone had the most ringers. In the Corn Hole Tournament, the winners were (below) Estill Sizemore and Kenneth Combs. Finishing second were Lonnie Johnson and Don Hall, and third were Jack Hopkins and Ricky Calhoun.

Senior picnic: Early Friday morning, May 2, the seniors of 1947 took cameras and their bright and shining faces aboard the snazzy new school bus and were off for a delightful day at the beautiful falls of “Bad Branch”. Mr. Isaac Hogg had the honor of driving these innocent seniors up the scenic Pine Mountain. About two long miles from the falls, these happy children alighted from the new bus and began the difficult climb to the falls. When they arrived, each was ready for their share of hot dogs, potato salad, cheese, potato chips, apples, cookies, and cakes. As we were returning, a few stranglers were sprinkled with the rain, while the remainder of seniors of 1947 were comfortably seated in the new bus. Many beautiful songs were rendered by the class in going and returning. Many cute snapshots were taken. Everyone reported a wonderful time. Other guests who had the honor of being present at this joyous occasion were: Miss Vera Raleigh and Mr. W.L. Stallard. 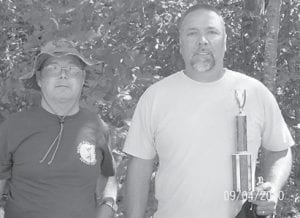 Who’s Who in the

Basketball: For the first time in several years, W.H.S. had a basketball team. Counting both our “A” and “B” games during the season, our boys were fairly successful. Out of 30 season games, we won 16 and lost 14. We won 2 and lost 2 of the Kingdom Come games. Out of 3 with Fleming, we won 2 and lost 1. We lost both games to Robinson. We played 3 games with Viper, winning 1 and losing 2. We split with Dorton 2-2. Out of four games with Jenkins, we lost 3 and won 1. We won both games with Combs. We split 4 games with Hyden winning 2 and losing 2. We won all four games with Stuart Robinson.

Thomas Fugate was captain of the basketball team and turned out an excellent job. He was high point man of the season and Herbert Caudill ranked second.

Coach Saylor leaves W.H.S. this year. He has been a wonderful friend to the student body and we regret that he is leaving us.

And now, as school closes and the seniors leave the hill, we wish W.H.S. all kinds of luck in their sports of the future.

(The above article from the April-May 1947 Black Kat.)