Commencement exercises for 214 graduation seniors at Whitesburg High School will be held at 7:30 p.m. Saturday, May 22, in the school gymnasium.

Dr. B. H. Jarman, president of Pikeville College, will deliver the commencement address.

The Rev. H.M. Wiley, pastor of the Whitesburg Methodist Church, was to give the baccalaureate sermon Sunday in the Whitesburg grade school auditorium. 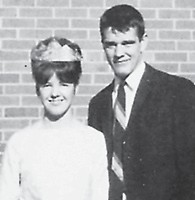 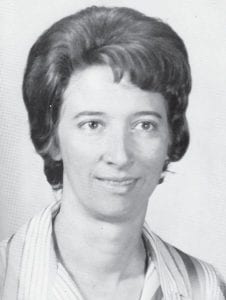 What Freedom Means to Me By Ronnie Morgan: Freedom means that I can walk down the highway, or down the street, or go to a movie, and know that I am free.

When I want to go somewhere I will not be told, “If you go you will be executed.”

I want my own house, I want to raise my own food without someone sharing or taking half of it.

Freedom is being able to work and receive a salary; play and enjoy fun; walk and be refreshed, run and be invigorated.

Freedom is truth, honesty and having faith, without somebody plotting to chop off your head.

(The above article from the Oct.-Nov. Black Kat.)

As we venture to room no. 22 we see a cheerful lady. On her face is the reflection of a continuing memory of the satisfaction of long devotion to the education of students at W.H.S.

She has had problems to face, but she has solved these by insight and patience.

The seniors especially wish to thank her for her support to their activities.

Her effort is not only confi ned to academic pursuit, but she has devoted her time to co-curricular activities.

We humbly dedicate this 1965 Yellow Jacket to Miss Jeanette Wampler.

The Whitesburg High School Band and other local musicians will take part in a “Spring Festival” at the grade school auditorium Tuesday night.

The festival, to be called “Musical Memories”, will feature performances of musical numbers from the ‘90s through modern times.

Some townspeople also will take part in the program, which will include some dance numbers also.

The junior class is sponsoring the event.

Whitesburg High School Band Spring Concert will be held Friday, May 7, at 7:30 p.m. in the Whitesburg Grade School Auditorium. Admission will be taken at the door. $1.00 for adults, 50 cents for students.

Proceeds will go to help support the band.

A varied musical program is planned, from classical music to folk songs. Selections included will be: “American Steel Suite”; “Parade of the Charioteers”; from “Ben Hur”; “Elsa’s Procession to the Cathedral”.

Band Boosters will sell refreshments before and after the concert and during intermission.

Mr. and Mrs. Frank Bickle will soon be moving to Lexington and the band hopes for a large turnout in their honor.

Bring us a bag full of happiness, a lump of good luck, a stocking full of love, and fill the toe with opportunity and lots of good times together. Thanks Santa, Jerry Sharpe and Betty F.

Please bring me a train of thoughts that do not run on a one-way track; a cookie that doesn’t crumble; a New Year’s resolution that won’t get broken; a treasure chest of golden dreams, and a doll that doesn’t cry. Mama, wrap all my gifts in aluminum foil and tie them with moonbeams. Fill my stocking with candy kisses and put in a few nuts, too, but not the kinds you brought me last year — they’re driving me crazy! I’ll leave you some hay for Rudolph on the housetop. Susanna Sumpter.

Every senior was thrilled and ecstatic over their long awaited class rings! Our gym was decorated beautifully and we were very proud! Douglas (Happy) Chandler and Brenda Watts were the chosen King and Queen. The seniors are very proud of themselves, with everyone working so hard to have it ready in time.