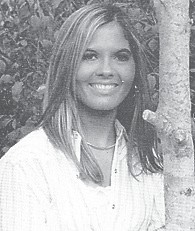 Miss Yellowjacket: Brandy Sexton has been selected as Miss Yellowjacket for the 2003-2004 school year. Brandy is the daughter of Allen and Betty Sexton. During her four years at W.H.S., Brandy has participated in many clubs, organizations, and athletic programs and has proven to be a true Yellowjacket.

Brandy also participated in volleyball for four years where she was captain her senior year, girls’ varsity cheerleading for one year, and cross country for one year. 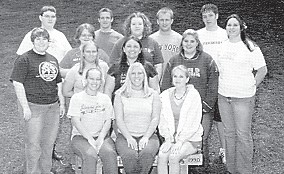 After graduation, Brandy plans to attend Morehead University or Alice Lloyd College, majoring in science. We would like to wish Brandy the best of luck in her future.

The Junior-Senior Prom was held on May 8, 2004 at the Whitesburg Middle School. The theme that was selected was “Ancient Paradise”. The honor of Prom King and Queen for 2004 was bestowed upon Mr. Chris Collins and Miss Elizabeth Day.

Yearbook Dedication: This year we dedicate the yearbook to a most deserving faculty member, Mrs. Sallie Hubbard. Not only has she taught 21 years, but in those years she has touched the lives of all those she has encountered, encouraged and inspired.

She practices and believes that every student has the potential to succeed. Her motto for living and teaching is that students don’t care how much you know until they know how much you care. Ask any student, past or present, to describe Mrs. Hubbard to you and you will most likely hear words like inspiring, friendly, patient, trustworthy, and many more descriptors that pages could never fill.

She has worked diligently to establish the Bible Club and her work with other programs throughout the years, beginning with her twelveyear career with the track and cross country organizations to her never-ending work with the annual food drive and the Baccalaureate Service that endears her to the students and inspires each of them.

We would like to take this opportunity to thank Mrs. Hubbard for her service to Whitesburg High School and all of its students. She continues to be an encouraging inspiration of faith and hope, and it is with pleasure that we acknowledge all of what she has done and strives to do in making our school a better place.

Ai Kagawa is originally from Japan. While at W.H.S., she has enjoyed her classes, the friendships she has made, and playing on the tennis team. Her hobbies have included: playing soccer, reading detective books, doing jigsaw puzzles, and singing karaoke. She will miss her friends and her host family when she returns to Japan.

Julian Machicao is originally from Germany. During his time at Whitesburg he enjoyed spending time with his friends on the weekends. His hobbies have included: playing soccer, snowboarding, and hanging out with his buddies. He will miss all the friends he has made and speaking the English language.