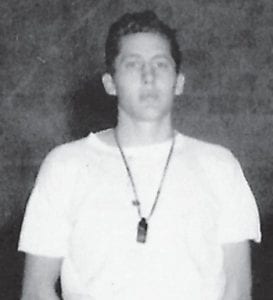 Special awards were presented to members of the 1948 Whitesburg High football team in the school auditorium Monday of this week. Black and gold letter sweaters, with a small football attached to the letters, were awarded to 13 players of the Yellow Jacket squad.

Coach Ray Pigman spoke to the recipients and told them to appreciate and wear with pride the sweaters awarded them. He said that the privilege was given to no one else and that the team deserved the sweaters because of their work and sacrifice.

Discussing the qualities and abilities of the different players. Coach Pigman said the boys had worked hard, had given their time, their strength and their sweat to play football for Whitesburg High School.

Two additional awards, donated by Dawahare Department Store, were also awarded by the coach. These miniature gold footballs were given to Harold Minns, chosen as the team’s most valuable man, and to Dean Nease, as the member who had the greatest sacrifices to play with the team. Minns has played four years without missing a single practice and served as field general, calling the offensive plays and defensive formations. Nease traveled 20 miles day and walked more than five miles each day after practice to his home on Trace’s Fork.

At the Regional Band festival held at Harlan on Saturday, April 2, the Whitesburg High School Band, under the baton of Hugh Adams, was rated “Superior”.

The band was outstanding in uniformity of dress and appearance. Martha Ann Holbrook, the solo player, was acclaimed the outstanding soloist of first mention. Barbara Lewis, who played the flute solo, was named second. This is the 7th Regional contest in which Whitesburg school band has rated Superior. The band is now eligible for participating in the State contest in Lexington on May 21.(The above article from the April 7, 1949 Mountain Eagle.)

Miss Pauline Amburgey, graduate of Whitesburg High School and Eastern State Teachers College. Formerly taught in Alliance, Ohio, and McRoberts Junior High School. She is our new health and history teacher and sponsors the Art Club. She says she likes our high school very much.

The high school girls are very happy to have a handsome young bachelor on our faculty, Mr. Bill Collins, graduate of Eastern State Teachers College, teacher of general math and government.

“It’s Dan and Cann and Faye and Fern,” yes Whitesburg High has six sets of twins this year. Some have been here other years, but still it’s pretty hard to know one from the other. For your interest and information, the twins are Dan and Cann Craft; Faye and Fern Caudill; Janice and Joyce Raleigh; Ruth and Ruby Newsome; Eva and Elvin Elkins; and Mary Jane and Mack Jean Day.

Lincoln Story. The boys and girls of WHS were privileged to see the life story of Abraham Lincoln on our motion picture screen. It was activity period, Tuesday, Oct. 5. The picture told of Lincoln’s rise from railsplitter to President. It was very interesting and I think that the students enjoyed it very much. We should all set the goals attained by Mr. Lincoln as our goal and strive to win them.

On Friday, Oct. 15, we were visited by Dr. Delgardo, Evangelist from the First Baptist Church of Marion, Va. He was accompanied by Mr. Gardner, singer. Dr. Delgardo, brought an invaluable message to the students, and Mr. Gardner led us in song. The students should really do some thinking on what Dr. Delgardo said. We wish to thank Reverend Marion Parker as well as our principal, Mr. Tolliver, for bringing Dr. Delgardo to us.

On Wednesday, Oct. 27, the students were given invaluable advice on health by a motion picture. The picture dealt with tuberculosis, from the beginning to the end whether it be recovery or otherwise. The students should all take this advice to heart as it could be used to save thousands of lives per year.

Linda Lou Franklin from the senior class, gowned in a gold satin formal carrying an arm bouquet of gold and lavender mums, and wearing the purple and “ermine” train, carried by Larry Goodwin of the first grade, walked proudly down the aisle with Ralph Collins, junior class, who wore the King’s regalia, train bearer David Combs, and were crowned by Prof. Millard Tolliver in ceremony as Queen and King of the Hallowe’en Carnival of 1948. Their attendants and runners-up in the great Class Contest were Spicey Bates and Douglas Polly of the freshman class; Jean Ramsey and Bill Longmire of the sophomore class; Delores Holbrook, junior Class and Junior Bates, senior class.

Preceding the crowning, the huge crowd had the opportunity of all types of entertainment, including variety show, freak show and other booths.

The Hallowe’en parade, at 10 a.m. through Main Street, led by the high school band, was the most colorful and comical of any parade of other years. The junior class carried posters of merchants and political candidates. Mrs. Ruth Rice, Chairman, and Mrs. Jack Harter, Cochairman, report the sum of $3817.09 was raised by the carnival. The carnival is sponsored by the Parent Teachers Association for the school.

Voris Taulbee, sophomore. Has played his last game of basketball for Whitesburg. His age will cut him out for next year. He made the All-District Tournament team in this first year to play basketball. He received a gold basketball award. Taulbee was a valuable man for rebounding! He did a good job defensively, usually guarding the most dangerous man on the opposing team. Total points scored was 50.

Glenn Pendleton, senior. Most consistent tournament player in defensive and offensive play. Although he was not given an award at the district tournament — in the minds of most of the people, he should have won district honors! Pendleton will be greatly missed from the Yellow Jacket team next year. Points scored 95.

Dean Nease, junior. Had a fair year. Scored second highest points of the team, 126 for the year. Was on starting lineup. Prospect good for next year.

Ronnie Kincer: sophomore. Points scored 68. He is an aggressive, fast player. On starting lineup part of the year. He should make starting lineup next year. Should make an outstanding athlete for WHS in his next two years.

Cann Craft, sophomore. Total points scored 42. Craft alternated at forward on starting lineup. He showed up quite well in some of the games. He is expected to fill vacancies in forward position next year.

Clyde Hunsaker, junior. Points scored 25. Started some games this year and was a very valuable reserve. Next year, his senior year, we are expecting him to do a good job.

Robert Stout, sophomore. Played some on the varsity team and mostly on B Team. Showed much improvement. He came a long way in his first year. Should be great help in next year.