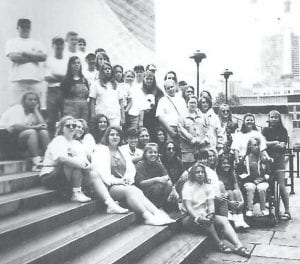 Excitement filled the air as the bus left the WHS parking lot that Thursday night at 8 p.m. However, five or six hours later, sleep had overtaken most of us. We arrived at our hotel on the New Jersey Turnpike early Friday morning. With only a couple of hours to get ready, we departed for a visit to the Metropolitan Museum. Later that evening, we attended a wonderful performance of “The Phantom of the Opera”.

Our second day was led by our two-hour late actor, model, singer, dancer, tour guide, Kevin. He showed us Central Park and all the homes he claimed celebrities lived in. After ditching Kevin, it was off to Shea Stadium where the New York Mets defeated the San Francisco Giants. Dinner was at the Café America followed by touring the Empire State Building where our express elevator whisked us up to the 82nd floor. Afterwards, we headed back to the hotel for some much needed sleep. 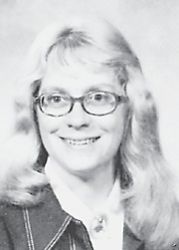 Sunday, our last day in the “Big Apple”, we took the ferry to Liberty Island to see the Statue of Liberty. Then, after a walk through Greenwich Village, we shopped the day away at the beautiful South St. Seaport. Dinner that night was at the famous Hard Rock Café. All too soon, we were saying good-bye to our super bus driver T.J. and boarding the bus for home. This is one trip we seniors will never forget.

Most mischievous – Jerome Hatton and Valerie Wynn. Most studious – Tony Back and Wendy Ward. Best all around – Greg Bailey and Amanda Pike. Citizenship – Aaron Kincer and Tammy Short. Most courteous – Matt Cox and Heather Collins.

The 1995 Yellow Jacket pays tribute to a special person who in many ways can be considered the glue of our school. She greets everyone with a welcome smile full of enthusiasm. Her warmth and caring are always available for a quick pick me up.

Throughout her years of dedication to Whitesburg High School, she has seen that the school runs like clock work. She is much more than a secretary — she is a friend to both the students and the faculty as well as an integral part of the school. In return for her gracious contributions to education, we extend our warm thanks and best wishes as we dedicate the 1995 Yellow Jacket to Mrs. Pat Yinger. Mrs. Yinger served WHS from 1972 to 2002 making 31 years of dedicated service.

The WHS drama class ended the year with performing a collection of original student-written, one-act plays May 20 at the Appalshop Theater.

This school year produced not one but two drama classes. First semester performed two plays together, “Dracula” and “The Christmas Plays.” Due to complications, second semester was forced to cancel “The Wizard of Oz” to begin work on their original plays. Of which I’m proud to say was a success due to the hard work and dedication of the students.

From the pigpen — It’s about that time. The time that every senior is looking forward to, graduation. In the relief, there is also a sadness. I know that not all of our seniors here at WHS have that feeling but, I do believe that everyone has that anxiety of going on and leaving this same old cycle that they’ve gotten used to over the past 13 years. The whole life thing is a pretty scary deal, not counting leaving your friends and family. Well, I don’t want to give you some big sappy speech about all that, so I suppose I will sign off for the last time. First though, advice for underclassmen. Enjoy it while it lasts, because it doesn’t last long. It is over before you know it. To my fellow seniors: Good luck. I hope I hope you live entertaining and careful lives. See ya in 10 years! Until next time, good-bye.