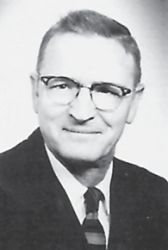 This is your life Mr. John Preston

Mr. John Preston was born in Martin County in 1913, the fifth child in a family of six. His father died when he was nine years of age, leaving six children under 14 years old. For the family, life was a struggle in a poor county that had no coal mines, no gas wells, no railroads and no logging operations.

He learned very early that he had to make a little money so he hulled and dried black walnuts, picked up apples, dug May Apple roots, ginseng roots, etc., for money for his own clothing and school supplies.

He graduated from Inez Grade School and Sheldon Clarke High School being valedictorian of his class. Someone (he never knew who) gave him a summer job through a government employment program.

He managed to save $150 and with that money and a workship to Pikeville College, he was able to begin his college life.

There his work day started at 4 a.m. as he had to fire the coal furnaces and cook stoves. He cleaned the cafeteria, mopped, washed dishes and anything else the four cooks demanded, and did this three times a day, then had to get to class on time (if he ran fast enough). His day ended at 11:30 p.m. when he locked the outside door to the dormitory.

After that one year, he dropped out of school and got any odd job he could find. At night, he attended Mayo Vocational School at Paintsville and took welding, carpentry, drafting and electricity. During this time, he also taught three years in the Martin County School System.

When World War II was imminent, he went to a powder plant in Radford, Va. then later to Newport News ship building where he worked until after war’s end.

Then he entered Morehead State College where he received his B.S. degree in industrial arts with minors in science, history and drafting.

His next teaching was in Floyd County in industrial arts with one-half day in Martin and the other halfday in Maytown.

After his marriage, he moved to Letcher County and taught three years at Whitco Grade School. He then applied to then Superintendent Dave L. Craft for an industrial arts job in Whitesburg which they had never had. With the promise of a thousand dollars, he bought what necessary equipment he could. John taught at WHS for the next 23 years, adding equipment as money became available.

After his teaching days ended, John became a farmer and gardener and passed away in 2003 at the age of 90.

Mr. Preston was honored for his many years of service to Whitesburg High School when the 1968 Yellow Jacket staff dedicated the yearbook to him in the following: ”68 Is Dedicated to John Preston. There are few who possess such talent for building, whether it be building character, enthusiasm, ideals and principles, leadership, frameworks for the junior-senior proms, electrical and mechanical gadgets that really function, stages for festivals, or just instilling the desire to be better men and women who will in turn make a better W.H.S. and a better nation. We consider you, Mr. Preston, a master craftsman, a jack of all trades.

(Information for this article was provided by Mrs. Ella Preston.)

The Harris Award and the Dugan Award were presented to Jack Kelson Cox and Patsy Day for outstanding qualities of character and leadership.

Note: Anyone having copies of the Black Kat or pictures pertaining to WHS and would like to share them with our readers, please contact me at 606- 633-5966 or e-mail at bennett.welch@gmail.com.