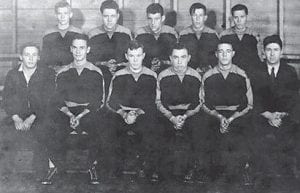 The tentative basketball schedule for the Yellowjackets of Whitesburg High, announced today, includes 12 games at home and nine away. Three home games will be played before Christmas holidays. Knox County High, Barbourville, will be met Dec. 12, in the opener. December 16 brings McVeigh High School of Pike County here and then Dorton on the 21 will lower the curtain until after the holidays. The Jackets will journey to Carr Creek the 15 of December.

Last Friday night the Whitesburg Yellowjackets came into town to engage the local quintet in a basketball game. This proved to be the best game that has been played on the Cavalier hardwood in many moons.

The game was well underway before either team was able to loop the ball through the basket for a counter; as a matter of fact the lads had been in action for a period of five full minutes before the visitors scored the first point of the game. The first quarter ended with the Jackets leading the Cavaliers by the score of 4 to 2. The second quarter was very much like the first with the Cavaliers scoring four points while the Yellowjackets chalked up two to tie the score at six all when the whistle blew for the half. The two teams were able to score a more frequently in the third quarter. In this period, Jenkins managed to push ahead of the visitors and end the quarter by a score of 14 to 12 in their favor. 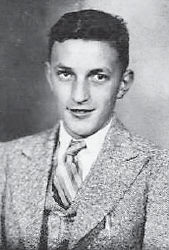 The fourth quarter was hard fought by the two teams and found them in a deadlock at 18 all as the period ended. They played the first overtime period which also ended in a 20-20 deadlock. The visitors, after tying the game up at 22 all, scored two points in the last few seconds to win the game.

The Whitesburg High ‘Basketeers’ defeated the alumni Monday night in a benefit game, 41-23. The first half closed with the alumni on the long end of a 10-7 count, but the second half was a different story as the effects of the first period began to tell on the tired ex- Yellowjackets, and the high school team slipped through their fading defense for one crisp shot after another. 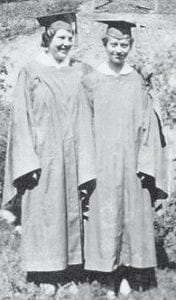 Holbrook and Haynes led the high school scoring with 15 and 12 points. Whitaker and Emmette Fields were outstanding for the Alumni.

Members of the W.H.S.

The biggest night of all on College Hill was the graduation exercises. The exercises opened with a processional followed by the 46 graduates marching in to strains of sweet music and taking their positions on the stage. Prof. Squires introduced the program of the evening and the invocation was pronounced by Rev. Garriott, pastor of the M.E. Church followed by the sweet strains of “Violet Lady” by the Girls Glee Club. Miss Lena Sturgill, one of the young lady graduates, was introduced as the salutatorian of the evening and delivered a short but well prepared address. Following this Miss Alta Parsons, the Nightingale of the school, sang a solo, “The House Beside the Road” to the silent delight of all.

Miss June Salling, the valedictorian of the evening, came forward and fascinated the vast audience with a delightful address, acquitting herself in an admirable way. “I Love A Little Cottage,” a duet sung by ladies, Mrs. Deanne Squires and Mrs. Miles Moore, charmed everybody. Supt. Arlie Boggs appeared on the stage and in a few well chosen remarks introduced Prof. R. V. Bennett, President of the Kentucky- Wesleyan College at Winchester, the principal speaker of the evening who delivered one of the best addresses ever given at a graduation. Prof. Bennett, being a mighty devout man and one of the strongest school and church advocates in the state and a true blue Kentuckian, captured his audience and held it spellbound until the last word of his address died on his lips.

Judge R. Monroe Fields was then called from the audience and after a short talk to the young men and young lady graduates, presented each of them with their diplomas which they looked forward to receiving for the last four years. The benediction followed by Rev. O.V. Caudill, after which the vast audience arose and quietly turned their faces toward the future, closing the curtain on the school activities of 1933-34.

Whitesburg and the large audience that witnessed it were well pleased and highly entertained on last Wednesday evening when the junior high school play was given in the graded school auditorium. Mrs. Rosa Jones, though for several days handicapped physically, was in charge of the training of the players. She brought out the very best that was in them, enabling them to acquit themselves almost perfectly on the stage.

Those who have not heard the Whitesburg High School Band in their orchestral efforts have so far missed a treat. The free-forall dance contributed by Dr. and Mrs. Passmore for the benefit of the boys and for those who enjoy tipping the fantastic toe at the Daniel Boone Hotel Saturday night will attest to this. The boys are trying to gather a few dimes in order to better equip themselves with instruments. And besides, to have such a band handy for all occasions is a great auxiliary to the town. It should be encouraged and all live citizens will do so. The members of the band, all nearly being mere school boys, are Klair Back, Ralph Webb, Woodrow Whitaker, Ted Bentley, Wayne Stamper and Bill Collins, leader. These boys are all struggling hard to get to the top.

The Whitesburg Yellowjackets closed a most successful season last Saturday, their first under the guidance of Coach Dick Bourne, former Centre athlete, winning 16 games and losing 8. They scored a total of 537 points for an average of 22 points per game, while their opponents scored 435 points for an average of 18 points per game. They tallied over half their foul shots making good 100 out of 191 chances. The individual scoring was led by Captain Bert Day, who chalked up 112 points. Total points for other players were: Haynes, 73; Blair, 59; C. Day, 105; Holbrook, 104; Hall, 16; Stamper, 24; Webb, 6; Adkins 4; Amburgey, 9. The strong defense of the Yellowjackets is in evidence by the fact that the largest score rolled up against them was 27 points, that total being made by Hazard in the Regional Tournament. The team will be greatly weakened by graduation, as Haynes, Blair, B. Day, Webb, Adkins and Amburgey are seniors.