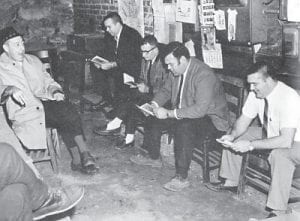 It appears that Mr. Ed Moore is serving as the choir leader for these singers in the furnace room (later called “The Snake Pit”) in their gathering before classes start. Members are from the back: Mr. William (Trim) Richardson, Mr. P.M. Armstrong, Mr. Gerald Frazier and Mr. Buddy Roe.

The Harris Award for character and leadership was established in 1954 in honor of Professor Henry Howell Harris who served as principal of Whitesburg High School from 1919 to 1927. He taught more than 50 years in Kentucky schools and will always be remembered for his integrity and for his talent to inspire young people to rise to the heights of their abilities. Each year, the faculty chooses the outstanding senior boy to receive this coveted award.

This year’s Harris Award winner is Ronnie Biggerstaff , son of Mr. and Mrs. Ray Biggerstaff , of Whitesburg. Ronnie is President of the senior class, was voted Mr. Whitesburg High, Mr. Senior and most popular. He is a member of the Senior Committee, Student Council, W Club, Photography Club, Speech Club, D.E. Club and Beta Club, plays baseball and is in the top 10 percent of his class. Ronnie plans to attend U.K. Community College for two years, and then go to the University of Kentucky in Lexingtonto finish his education.

The Dugan award for character and leadership was established in 1965 in honor of Miss Ann Dugan, who was a member of the Whitesburg High School teaching staff from 1934 through 1960. Miss Dugan was the first Home Economics department head and for many years held her classes in the old building behind the high school. She lived upstairs over the classrooms and was always available for consultation and help beyond the school hours. Miss Dugan did an outstanding job in training her girls and the Home Ec club received many congratulations at their annual conventions.

This year’s Dugan award winner is Yvonne Baker, daughter of Mr. and Mrs. Edward Baker, Whitesburg. Yvonne was voted the girl with the most potential, was President of the F.H.A. and a member of the French Club, Beta Club and the Bible Club. She has been accepted by Cumberland College, Williamsburg, and will start her training there this summer.

Angela Lynn ‘Jill’ Combs, daughter of Mr. and Mrs. Dan Combs of Whitesburg, receives the honor of maintaining the highest grade average of the 1970 Whitesburg High School graduat- ing class and was declared the valedictorian of her class. There are 170 members of the class.

Janice Kaye Lucas, daughter of Mr. and Mrs. Clyde Lucas, Whitesburg, receives the honor of maintaining the second highest grade average of the 1970 Whitesburg High School Graduating class and was declared the salutatorian of her class.

Morehead Coach is to

Bill D. Harrell, head basketball coach at Morehead State University, will be the main speaker at the Whitesburg Athletic Banquet May 16.

The banquet will be held in the Whitesburg High School cafeteria. Starting time is 7 p.m. Tickets are on sale.

He was assistant coach at the University of Nebraska from 1967 to 1969, going to Morehead in May, 1969, as head basketball coach.

He is a 41-year old native of Pike County, and a graduate of Kentucky Wesleyan College. He did graduate work at the University of Kentucky.

Dr. R.F. Strunk, professor of physical education at Pikeville College, will speak at commencement exercises at Whitesburg High School at 8 p.m. June 4, 1970. Diplomas will be awarded to 170 seniors. Baccalaureate services will be held at 8 p.m. Sunday at First Baptist Church. The Rev. Bill Mackey will speak.