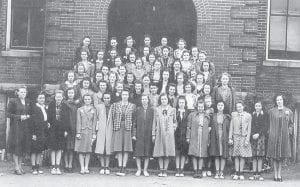 The Whitesburg Girl Reserves first started their active work in 1929 under the leadership of Mary Warren, Hazel Lewis and Dalna Hays. This work continued up to the present time. During the school year 1935-36 the organization was sponsored by Miss Pansy Webb. Our sponsor now is Mrs. William Salling, who has faithfully led the organization and brought it to the foreground sine 1937. Throughout this entire period a great number of girls have been interested members and have profited greatly from both religious and social standpoints.

We believe this has been our most outstanding year, and therefore shall tell about some of the activities of this year, 1939-40. We decided at the beginning of the year to create a school spirit among ourselves and the whole school and by selling football tickets before each game and by organizing a pep club we were able to do this. At the end of the football season we bought sweaters for the senior football players. These were presented to the boys by our sponsor at our Thanksgiving program which consisted of a play, a skit, and many delightful musical numbers. At the end of this program, Mrs. French Hawk gave a talk on ‘The American Red Cross’. Fruit baskets were filled also to be given to the sick and the needy.

During Christmas week, we had our candlelight service which was the installation of new members. This was a very beautiful and impressive program. On this particular occasion, we had as our guest the Fleming Girl Reserves, whom we entertained with a tea after the program.

At Easter time, we sold Easter Seals and lilies for the Crippled Children’s Fund and helped raise an unusually large sum of money for the county.

Early in the school year, we gave a Halloween party in the basement of the Daniel Boone Hotel; the money made on this party has been used all during the year for our various activities. We made a liberal contribution to the fund for the erection of the new Methodist Church.

Early in the spring we gave a silver tea honoring our parents and friends.

This year we have 67 members, all workers, and all better citizens for having been a member of this nation wide organization. Clarice Lynch