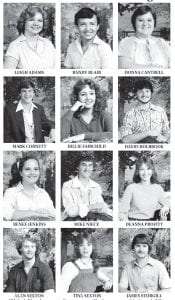 The Kat asked some of the students and staff how they spent their summer vacation. The following is part two of the results:

Shannon Gail Adams, a senior, went to Cincinnati for a week and to the pool when she had the chance.

Ramona Cook, a junior, went to horse shows all summer.

Mrs. Horn, “I worked all summer. I had to come back to school to get a vacation.”

Teresa Sexton, a senior, played softball and ran around.

Rhonda Maggard, a freshman, went to King’s Island and spent a lot of time at the pool.

Andy Cates, a senior, said, “I spent my time at home.”

Mr. Ison, “I worked up at the school, redecorated my home, went to Cincinnati for a week, visited relatives, worked in the garden, and took the band to King’s Island”.

Mahala Hall, a sophomore, stayed at home and went to the movies.

Mr. Armstrong: “I did a lot of things, I went fishing at the lake, raised a garden, repaired my house, and cut grass and weeds. I worked all the time.”

Tony Sergent, a junior, claimed that he went to Bermuda, Tahiti, and sailed around the world.

Patricia Collins, a sophomore, said, “I stayed with my friends all summer and ran around.”

Mrs. Yinger worked at summer school and supervised NYC employees. Worked in a large garden and mowed grass. Read and had company and entertained them. Visited friends and neighbors and canned. I had only two weeks’ vacation.

Ken Kincer, a sophomore, spent his summer swimming and fishing.

As the time of our graduation draws near, we of Whitesburg’s Class of 1982 spend much time reminiscing.

We started in August of 1978 with approximately 250 students in our class. There seemed to be too many of us. Even to those of us from the larger elementary schools in the county, the class seemed large. It was scary but at the same time exciting. We were to be a unit for the next four years.

At long last, we were GREENHORNS! The seniors tied us to the rail and the word “greenhorn” could be heard everywhere quite often.

Much of our class was involved in athletics. Thirteen boys played football. Eight boys played B-team basketball; the B-team was district champion that year! Five girls played B-team girls’ basketball. Six girls and four boys were on the track team. Three boys played baseball. Our B-team cheerleaders did an outstanding job that year.

Many of us became involved in clubs. Some of the initiations provided a laugh for the whole student body. Watching mathematicians roll down the walk to the English building or track bee-people all over the place lightened a few dull days.

As sophomores, we could help “torture” the freshmen. We enjoyed more prestige than the year before, but we weren’t upperclassman yet. Our class size had diminished slightly; we numbered about 190. Our class officers were Dottie Fields (President), Mark Cornett (Vice President), Rennea Raleigh (Secretary), Deanna Profitt (Treasurer). Our homecoming representative was Melinda Wampler.

Our girls’ basketball team made it to the regional tournament. Our football team did well, as did our basketball and both track teams. Our baseball team was EKMC Champion. B.J. Maggard, Brenda Williams, Jennifer Noble, Heather Buntin, Sandy Maggard, Jane Hanes, and Tammy Holbrook were selected varsity cheerleaders from the sophomore class. They placed first in district and region and went to state competition.

The girls’ basketball team ended their sophomore year with 19 wins, eight losses. The team went, for the first time, to the regional tournament.

Academically, athletically, physically — in all ways we grew and were able to take our places as juniors. We were finally upperclassmen!

Our homecoming representative was Dottie Fields. There were about 180 students in our class.

One great privilege of being a junior was being able to attend the prom. Our class was responsible for decorating the cafeteria and making all arrangements. The theme was “The Rainbow Connection”, the band was Legend from Lexington. We spent a lot of time and effort with fundraising and decorating — and it showed!

More of the Senior Will

I, Deronda Halcomb, will my 16-year-old brother to Melissa Serber. I, Vickie Cornett, will my long hair to Missy Combs. I, Ronald Ison, will to Chris Gibson my bench in vocational school. I, Betty Fields, will my ability to get out of sixth period class to Shelia Hall. I, Jennifer Ison, will my neat notebooks to Melissa Fields. I, Vicki Cook, will my ability of being quiet in drafting to Rocky Craft. I, Shannon Adams, will my place at the family dinner table to Dianne Hylton in hopes that she will keep my parents company while I am away at college. I, Linda Morris Boggs, will my back seat of the bus to Jeff Shortt. I, Carolyn McPeaks, will my ability to skip fourth period band without getting caught to Gloria Terracciana. I, Rennea Raleigh, will my great outlaw skills to Lisa Jenkins. I, Angie Wagner, will my common sense to Michele Sturgill. I, Delana McCool, will my shorthand skills to Arlene Ross. I, Susan Cornett, will my fun times in Business English to Ramona Cook. I, Renee Jenkins, will my good luck to Sharon Burton. I, Jimmy Lowe, will my skipping ability to Larry Lowe. I, Karen Maggard, will my great musical talents to Ricky Sparks because he needs all the help he can get. I, Janet Sexton, will my back seat on Bus 42 to Kenneth Collins.