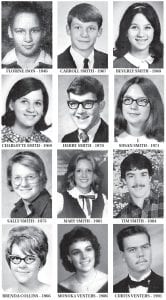 (The following article was taken from a news booklet published by the Whitesburg High School Future Farmers Club during the 1936 school year. The booklet was entitled, “The Yellow Jacket”. This article is from the October 1936 edition.)

This fair will be held in the High School Gym, on Friday and Saturday of next week. It is being sponsored by the Whitesburg Future Farmer Chapter and the 4H Clubs of Letcher County. There will be prizes offered to F.F.A. members, 4-H Club members and an open class for any resident of Letcher County.

In the 4-H Club division, prizes will be offered on record books for their various projects, Secretary’s record book and on 4-H Club and school booths. Premiums are offered to Future Farmers on corn and potato exhibits, best planned projects for 1936-37 and project record books for the past year. In the open class for adult’s prizes will be awarded on crops and vegetables. The judging will be by a member of the staff of the College of Agriculture, University of Kentucky.

If you have not looked over the catalogue, get one today. Make as many entries as you like. Help make this first fair a success. Patronize the businessmen who have made this fair possible. They are your friends.

To students of high school — What do you want to be? What are you going to be? Then be it. How? By starting now and making your life work your goal. Do you want to be a doctor? Visit sick people and every chance that you get, observe operations. Go with a doctor to see his patients if he will let you. Borrow his books and read them. Learn all that you can about anatomy, physiology and hygiene. Read articles that you see in magazines. Take a good medical magazine. Lose no time. Read. Think. Do you want to be a lawyer? Do like Lincoln. Know Blackstone. Read and learn it. It is the foundation. Approach this noble profession with bared head and resolve to be an honest, upright advocate. Do you want to be a schoolteacher? Be it. Begin slowly. Be prepared, physically, mentally, morally and spiritually. Do not try to be a teacher until you are fully prepared. Learn to read, write, and talk. Learn mathematics. Get ready, so that when the state calls for the “Survival of the Fittest”, the children shall have the best teachers possible. Remember, “Just anybody cannot teach school”. Do you want to be a farmer? Then keep company with Mr. Montgomery. Read farm papers. Put thought into the soil. It is a lifetime job if you succeed. H.H. Harris.

The Yellow Jackets lost to the Prestonsburg Black Cats on the enemy’s own field, September 26. Hard luck followed the Yellow Jackets all through the game. Prestonsburg ran back two passes for touchdowns. Then to cap the climax, Whitesburg fumbled near their own goal to have a Black Cat recover. Prestonsburg scored on the next play. The locals garnered 13 first downs to six for the winners. We lost 19 to 7.

On Oct. 11, the Yellow Jackets battled the strong Benham High School team. The Whitesburg boys showed very little fight in the first half, but they came back strong the last half to score two touchdowns while holding Benham to one. The game ended 32 to 12 in favor of Benham. The Yellow Jackets claim the distinction of being the only team to cross Benham’s goal line this season.’’

The following Saturday the Whitesburg boys staged a winning fight against Buckhorn, winning 19-0. The Buckhorn boys put up lots of fight but were outclassed. Collins, Kincer and Stamper scored for the locals.

The Yellow Jackets defeated Fleming by a score of 26 to 0. On the first play, every Whitesburg player got his man, while Bill Kincer reeled off a 65-yard run for a touchdown. Ray Pigman displayed such blocking skill on that play that he was called “The Flying Horseman”. The Yellow Jackets tallied 14 first downs to 2 for the Pirates. Fleming had 5 punts blocked. The final score was 26 to 0.

On last Friday, the Yellow Jackets met and defeated the strong Jenkins eleven 25 to 0. All the boys played good football. Kincer, Stamper and Pigman were outstanding in the backfield for the locals. Collins and Adams turned in good games in the line.

Our next game is with Stuart Robinson on Lewis Field, Friday afternoon, Nov. 6. This will be our last home game this year. Every one plan to see the final.

Watch the Home Economics Club do things this year. We have a program for the year called, “A trip around the World”. We will have at least one program each month that will be devoted to the study of foods, clothing, fads and fashions at home and abroad.

At present, all the girls sew and cook in one small room. We have asked however, for the second floor of the teacherage for a sewing room, leaving the first floor for cooking.

With permission, we will transform the cloakroom in the main building on the first floor into a rest room to repose when weak, to powder noses, or other general primping. Oh yes, before I forget, could the football boys secure us a recipe for beans?

The largest and loudest club in Whitesburg High School is the Science Club. Our aim is to make the school more modern and convenient. Last year we lived up to our aim by buying the school a radio. This year we want to install an electric bell system. The club as a whole will take Psychology as the scientific study for the year. We hope to have a better understanding of ourselves by the time the course is finished.

Our meetings are held every Wednesday, at the third period. We have about forty boys and girls enrolled. All old members are invited up to boost the peppiest Club in High School.

The Athletic Association and the Future Farmers sponsored a program given by the Georgia Wildcats last Wednesday, Oct. 21. The troupe consisted of the Georgia Wildcats, Deford Bailey and Honey Wilds. The matinee held for the students went over in a big way. The house was crowded for both the afternoon and evening performances. The program was heard with wild enthusiasm.

THERE HAS BEEN AT LEAST ONE POSITIVE DEVELOPMENTAUTUMN SUNWinter of 2020-21 will be similar to last two years, woolly worms say