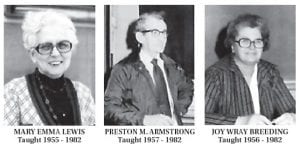 The following are predictions of what the members of the WHS Class of 1982 will be doing when they gather in 1992 for their 10th reunion.

Jeffrey Adams is a camel jockey. Larry Adams is a carpenter in Los Angeles who builds Beverly Hills mansions. Dale Bailey is a bus driver. Robert Baker is a safari hunter. Sherry Barker is an FBI agent. Machelle Bates is an auctioneer. Charles Blair is the owner of Blair Lake. Judy Mason is assistant coach to Billie Jo Hatton. Michael Burl Sexton is the owner of an insect farm on a tropical island. Chuck Sparkman is a prestigious preacher in a small county in Iowa. Melinda Wampler now presides in New York as one of the most famous gourmet chefs. Allen D. Sexton is a trapeze artist for Barnum and Bailey Circus. Jackie Adams Fugate is still married and is head nurse at Whitesburg Hospital. Gary Mullins is racing cars down Mountain Motor Speedway every Saturday night. Melody Taulbee is one of the happiest people around because of her new job as drama teacher at WHS. Jimmy Wright is still trying to figure out the solution to the world’s largest Rubik’s Cube. Wade Wright owns his own hair-styling shop in the middle of Whitesburg. Tammy Starnes has opened up her own beauty salon in Los Angeles, Calif. Brenda Williams is a legal secretary in Washington, D.C. James P. Shepherd is a famous movie screen actor with a reputation which surpasses Valentino’s. Ama Wright is now married to Morgan Blair and aids in training her son to be a professional football player. Wendy Caudill is head manager of Maloney’s and is living happily with her husband and their two kids. Randy Tolliver has hit it big with his latest country music releases. Morgan Blair is married to Amy, and they have just finished plowing their own farm.

Karen Parsons is now working as a nurse at Whitesburg Hospital. Jimmy Collins is now the manager of Coast-to-Coast. Regina Morris is the Distributive Education instructor at WHS. Ricky Smith now plays professional football for the Pittsburgh Steelers when he isn’t busy with another modeling assignment. Russell Spangler has just released his eighth million-selling rock album. Teresa Sexton has become the first female member of the Harlem Globetrotters. Cassandra Helton Poe is working overtime trying to care for her husband and two children while working at Dottie’s Boutique.

The WHS boys’ varsity cheerleaders are leaving for nationwide competition in Florida on February 25. They will fly on Piedmont Airlines; their travel agency is Air/Sea International.

The competition is to be held at Sea World in Orlando, Fla., on Feb. 28. It will be nationally televised approximately a month later. There are 20 squads competing, and only two squads are from Kentucky. The top 10 squads will perform their routines on television; the top five will receive trophies.

At WHS this year, the Yellowjackets have received numerous honors. Two students, Katherine Gish and Elizabeth Masters, were finalists in the National Merit Scholarship contest.

The marching band was third in the Prestonsburg Band Festival and received a superior rating at the McChesney Band Festival. Four band members, Betsy Adams, Leigh Adams, Karen Maggard, and Angie Miranda, were chosen to play in the All-Festival and All-District Bands. They also participated in the Morehead Band Clinic.

Diane Hylton was the school champion in the conservation essay contest. She was also the county champion as well.

Four members of the HOSA Club placed in state competition and earned the right to compete at the national level this summer. Elizabeth Howard placed first. Leigh Adams came in second. Anna Looney and Lisa Holbrook both placed third.

Karen Halcomb won the handicap essay contest at the state level and participated at the national event in Washington, D.C.

This year three teachers are retiring from WHS. Mr. Preston Armstrong, who taught for 25 years at WHS, was a teacher of science. Mrs. Joy Wray Breeding, a teacher of English, has taught at WHS for 27 years. For 27 years Mrs. Mary Emma Lewis has taught English and History at Whitesburg. These three teachers have devoted a total of 79 years toward the education of students and on behalf of the 1982 Yellowjacket staff, we express our appreciation for their teaching and guidance throughout the years.

(The above articles from the 1982 Black Kat Newspapers and the 1982 Yellowjacket Yearbook.)