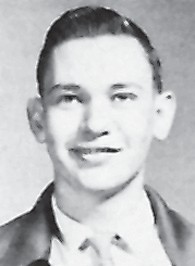 From the 1930s until closing, excellent music teachers, band and choral programs and talented students were a part of Whitesburg High School. The results of these excellent music programs at Whitesburg High School gave the impetus for lifelong musical careers for many former students. There are innumerable stories of success and careers in all types of music fields as a result. This is the story of only two of those many. These WHS trained bandsmen’s parallel lives began at Millstone in the 1940’s and their attendance at WHS in the 1950’s led them to a lifelong friendship.

Orville J. ‘Johnny’ Doyle Jr. and Ed ‘Eddie’ Cornett were born one day apart at Millstone. Johnny was born on July 28, 1938 and Eddie on July 29 of that same year. They attended Millstone Grade School for eight years, began WHS at the same time and joined the Whitesburg High School band directed by Dr. Hugh Adams on the same day. The musical interests of both were further stimulated by the guidance and friendship of former WHS Band Director Jack Taylor. Needless to say, their high school careers and music experiences further cultivated that lifelong friendship. In recent interviews, we were able to follow their professional music careers as a part of the WHS band stories. 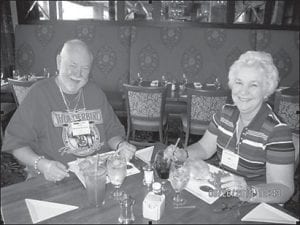 The featured interviews with these two great musicians reveal much about life at Whitesburg High School in the 1950’s and serves as a tribute to all of those whose lives were influenced by WHS teachers and music programs.

< b> Orville J. ‘ Johnny’ Doyle Jr. was born at Millstone to Orville J. and Virginia B. Doyle on July 28, 1938, the day prior to Eddie Cornett’s birth in the same community.

At that time, Orville J. Doyle Sr. worked in the Jess Holbrook store at Millstone. Soon thereafter, Mr. Doyle moved to SECO to be assistant manager of the South East commissary and relocated the family, including Johnny and his older sister, Wanda Jean, to that community. When Johnny was six, the family moved back to Millstone where he attended all eight of his graded school years. Academic competition was stiff in those years as his classes also included Joella Craft (the 1956 WHS valedictorian), a top student in Daryl Long as well as his lifelong friend, Eddie Cornett. 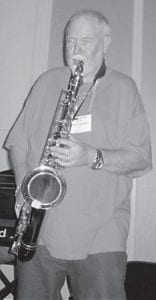 Johnny Doyle learned to play the saxophone at Whitesburg High School and has been entertaining with music since that time.

In 1952, Johnny Doyle and Eddie Cornett chose to attend Whitesburg High School and decided they might join the WHS band, confessing that the initial impetus was to be able to sit close to the majorettes at football games. They met with Dr. Hugh Adams, who immediately took them to the room where the cache of band instruments that Dr. Adams had obtained from “government surplus” were stored. After rummaging through the available tools, Dr. Adams and Johnny cameupwithaCmelody saxophone, one of the few in existence. Johnny says “that half of the notes on the small saxophone would not play, but that was not a problem since he couldn’t play even one note.” Eddie Cornett selected an old clarinet according to Johnny.

Hugh Adams introduced Johnny and Eddie to Bert Francis, a sophomore band member, who would be his first instructor. Bert took Johnny Doyle, Larry Craft, Eddie Cornett and Eloise Reynolds to a back room and began to show his new pupils the basics of holding an instrument, blowing into it, installing and cleaning reeds, etc. As soon as they could make some sounds from the instrument, they moved up to “ beginning band” where Arnold Hatton, a WHS junior, was the teacher.

By Christmas 1952, Johnny’s parents were so pleased with his musical progress that Santa brought him a new tenor sax. Armed with his new instrument, Doyle was moved into the concert band and played at the spring concert and the musical festival.

Johnny Doyle recalls that during his sophomore year at WHS, his family moved to the old Golf Course area of Mayking where he developed a new group of neighborhood friends including Larry Craft, Ralph Polly, Denton Lee Patterson, Phil Bentley, Bobby Dick Spangler and one special guy, the late Lloyd Hodge. His friendship with Eddie Cornett remained a constant.

Doyle’s second year of high school saw the arrival of a new band director named Jack Taylor with a special emphasis on a top marching band and who also wanted to start a “dance band”. So as not to alarm anyone, the “dance” term was dropped in favor of “stage” band.

Taylor purchased a limited number of dance band arrangements and practice for this type music began. Jack Taylor arranged for Johnny Doyle to be assigned to the band room for study hall. Every day, Jack and Johnny and others practice this new “dance” music. It was several years before Johnny Doyle and others discovered that Jack Taylor had never played in a “dance band” either so it was an adventure for all concerned including the bandleader! Some days Lovell ‘Doc’ Williams would come up to school and would play either drums or piano along with them. Lovell also spent many hours with Johnny Doyle individually, playing piano while Johnny learned to play all the old big band standards without reading the music. Many times over the years when asked how he had such a large repertoire of old songs, Johnny would just laugh and say, “Doc taught me”!

Johnny Doyle claims that by his third year at WHS there was even more band, lots of new friends and girlfriends, parties and a minimum interest in academics. Music had become a major part of his life. The Jack Taylor Orchestra had become a success and Johnny and others playing with that group could pick up $8 per night on weekends when the group was booked. And, they had access to nightspots and experiences that very few high school students ever had. At the same time, Jack Taylor’s WHS band became one of the top high school marching bands in the state.

When Jack Taylor suddenly left Whitesburg in the summer of 1955, just prior to the beginning of Johnny Doyle’s senior year, he and others were devastated. Doyle decided to go to Chattanooga where his older sister was living. In Chattanooga, he joined the musicians’ union and began playing professionally in the big bands which were still playing there while attending Chattanooga Central High School

“This lasted until homesickness set in. I recognized that while I was spending my time concentrating on rehearsing, playing and going to school, my friends back in Whitesburg were all partying, dating, planning for the Washington trip and talking about the prom. So at Christmas, I decided to come back home to WHS for the second semester,” said Doyle.

The WHS band with a new director was not the same as during the previous couple of years with Jack Taylor. A lot of the old group had moved on to college. “We didn’t have time to break in a new band director,” Doyle added. Doyle says that he and Don Webb were able to get enough of the old group together to play some proms that spring but that was about all. During the summer, Doyle began playing the same clubs as before with Doc Williams on piano, Baldy Brush on drums and Gerald Mullins on trumpet. “If it was a good enough gig, sometimes Gene Mitchell from Hazard joined on bass,” according to Doyle. The good band times at WHS were over, at least in the minds of the closeknit group from the previous four years.

Johnny Doyle then attended Lincoln Memorial University for one year where he claims to have discovered a total ineptitude for stringent academics so he changed his major to his first love, music. He had actually decided to quit school after LMU when his old friend and teacher, Jack Taylor, arrived back in Whitesburg.

Jack told Johnny Doyle that he thought with his background and experience, he could get a scholarship at Morehead. So sax in hand, Doyle hitchhiked to Morehead, walked into the music building and asked if there was anyone there who would like to hear him play. It was summer and a slow day so Fred Marzan, the Morehead band director said “O.K., why not?” After about 30 minutes of auditioning, Marzan offered Johnny Doyle a full music scholarship including room, board and tuition and put him up for the night. The next day, Doyle hitchhiked back to Whitesburg carrying his sax.

That fall, Doyle joined the Ashland local of the professional musicians’ union playing his tenor sax to earn spending money. In 1960, he graduated from Morehead State University with a degree in music.

At that point, Johnny Doyle had been playing music professionally since midway through high school and he obviously had the talent to further develop as a musician. But, they also recognized that further growth and opportunities in music would require moving to a more populated area. Together, he and Evelyn decided that Virginia Beach would be an attractive area although this would mean leaving their eastern Kentucky homes behind. So they reluctantly moved.

Johnny became band director and Evelyn taught math at Bayside High School and John played professionally with orchestras and groups in the Virginia Beach-Norfolk area He also attended the College of William and Mary part time, receiving a master’s degree in 1967. Their first son, Mark, was born in Virginia Beach.

In 1969, they decided to move to Florida to take advantage of the weather. The first stop was Clewiston where John directed the band and again played his tenor saxophone professionally in both the West Palm Beach and Fort Myers areas. Second son, Scott Doyle, was born during this period.

The next move was to West Palm Beach where John served as a high school band director and did a variety of things including playing with his own band. Their daughter, Shannon, was born during their 19-year stay in West Palm Beach.

In 1998, John and Evelyn retired from education and moved to Fort Myers Beach where Johnny continued to play music professionally as long as it did not interfere with his beach time. Then Hurricane Charley came to town with devastating results for the Doyle family. They abandoned their beach life for the more protected area of central Florida and moved to Lake Placid where they live today.

Johnny Doyle still plays with bands occasionally and for his entertainment (and that of his friends) often. Golf did not prove to be a satisfactory replacement so now he enjoys his family and life around his swimming pool.

He still keeps in touch with his old friends from his Letcher County days. An occasional lunch in Florida with Jack Taylor and others brings many of his old high school friends together for tall tales and lots of memories.

Johnny Doyle says, “ I have had a terrific life doing mostly what I wanted to do which was playing music, teaching music and talking music with other musicians who I consider the greatest people on earth. All of this and sometimes I even got paid. I also must give my heartfelt thanks to all the people responsible for these good things that have happened to me in my lifetime, especially Jack Taylor and all of those other friends and teachers in Letcher County, who influenced my life more than anyone will ever know. I will never forget them.”