Football season is over at WHS for ’75 and for four young men it’s over forever. For their years of dedication and hard work, we think these guys deserve recognition. So, congratulations, seniors, for a job well done!

Jimmy Mullins: Jimmy Mullins, better known as ‘Tank’, played the position of offensive guard and defensive tackle. He was a twoyear starter and was a member of the 1975 all EKMC and all Letcher County teams. Coach Ozz Jackson had this to say about him: “He was one of the leaders of the team, and one of the better linemen to have played at WHS.” The Black Kat would like to commend Tank for a fine football career and wish him luck in whatever he attempts in life. Jeff Couch, half-back, has put in four years of football at WHS, three of these as a starter for the varsity. Jeff was one of the leading rushers this year. He was also a member of the ’75 All EKMC and All County teams. Coach Jackson had this to say of Jeff: “He was a good team leader and is a good all around athlete. 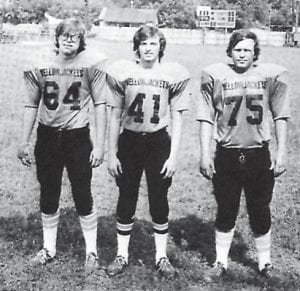 Pictured at left are Vince Yinger, Jeff Couch, and Jimmy Mullins. Not pictured is Mark Larkey.

Vince Yinger has been a two-year starter at guard for WHS. Coach Jackson was well pleased with his overall performance. “Vince improved a lot and turned out to be one of our better linemen.”

Mark Larkey, third year football player, was considered by one of his coaches to be a “hard worker”. Mark was a member of all the specialty teams. “He had a good attitude.” That’s a compliment that came from one of his coaches.

President Allan Howard is the son of Russell and Burnie Howard of Whitesburg. His hobbies are playing the guitar, basketball, football, softball, and hiking. He is a member of the VICA Club at the vocational school. After completing his high school education, he plans to go to electrical school.

Vice– President Pete Roberts is the son of Jack and Cass Roberts of Cowan. His hobbies are basketball, softball, football, and hiking. He is a member of the VICA and Pep Club. Pete doesn’t plan to go to college.

Secretary Don Fields is the son of Elmer and Christine Fields of Colson. He is a member of the Beta and W Clubs. His hobbies are motorcycle riding and “going to the bump.” He plans to be an engineer in the future.

Treasurer Judy Day is the daughter of Mrs. Panny Day of Kingscreek. She has been a varsity cheerleader for two years. She is a member of the Pep Club and is president of FBLA.

Johnnie Ramsey, senior: To straighten up a lot of loose ends and do what I need to do and not what I want to do. Melody Moore, senior: To no longer be a “foul out friend” and aim for higher goals! Rachel Breeding, senior: To be a true friend and wear a cheerful smile daily. Belinda Mason, senior: To be on time for class at least once a week! Sherry Breeding, junior: To try my best to stop blinking. Junior Banks, freshman: Make 20 out of 25 foul shots in ball practice. John Welch, sophomore: I plan to be a better person and make life easier for everyone.

More selections from the Class Will

Ola Cornett wills her long blond hair to Marie Kincer. Sam Banks wills his ability to pick out the right answers at math contest to Roger Yonts and Mike Gover. Steve Frazier wills his fantastic ability to catch a baseball to Keith Combs. He was going to will his hitting ability also but he thought one joke was enough. Kathy Carter wills her shorthand ability to Liz Cassolari who needs it especially in Mr. Sexton’s class. Joey Webb wills his ability to make friends to Arthur Webb. Sherrie Hogg wills her good nature to Tony Hubbard. Cecelia Day wills her back seat on bus 38 to Diane Roark. Stevie Brown wills his parking place to Donnie Banks who has trouble finding one. Nancy Shepherd wills her laugh to Hilda Craft. Barbara Sturgill wills her sense of humor to Daveena Sexton.

A $2,000 gift has been awarded Whitesburg High School in honor of three former Letcher County educational leaders, designated by Bill H. Blair, namely the late R. Dean Squires, the late Elijah Hale, and Arlie E. Boggs. The scholarship fund is to be used to help a student to go on to a brighter future .

Baseball is becoming one of the more popular sports at Whitesburg. The Jackets broke into their season against a powerful Wheelwright team and lost 10-4. The next game, the Jackets met in district competition with Jenkins and overpowered them 8-3. The next game also matched the Jackets against the Cavaliers. The Jackets fell behind early in the game and lost 10-9. More district competition matched the Jackets against Fleming-Neon, where they surpassed their opponents by a margin of 14-2. Defeat came again at the hands of Wheelwright 14-3. The Jackets traveled west to play one of the finer teams in eastern Kentucky. They brought back a very proud 2-0 victory over Napier. The following week, the Jackets had an off day and suffered a 15-3 defeat by the Dilce Combs Panthers. Whitesburg came up against another powerful team from Hazard, which they defeated 6-5.

At this time, Whitesburg’s record is 4 wins and 4 losses.

Student Government Day, an annual event made possible due to the combined efforts of Mr. Larry Ison and the Rotary Club and local, city and county officials, was held Thursday Nov. 20.

When asked to comment, Mr. Ison had this to say: “Acquaint students with different occupations within the county government, or career awareness. The students had a class discussion of their experiences.”

The Ring Dance is over, but the seniors are still flashing their rings to anyone who will look. Everybody we’ve talked too seemed well pleased with their rings. There’s something about finally getting your class ring that makes you feel like a Senior with a capital S.

A lot of clubs have been busy with money-making drives. The FBLA and VICA clubs at the vocational school and the DECA Club at WHS have been selling candy for their year’s projects. The Home Ec classes sold gourmet popcorn in apothecary jars to raise money to purchase an air conditioner. The Beta Club sponsored a bake sale to help the MS foundation. The sale was successful and a lot of fun. So a lot of people seem to have been kind of busy lately.

The seniors enjoyed a trip to Hazard Community College to participate in a higher education career day with representatives from many of the state colleges and universities there to discuss their future plans with them.

Congratulations to Debbie Hammock, who was voted the seventh best player in the 14th Region. Debbie is a junior at WHS and this is her second year of basketball.

Letters to Santa from your faculty

The staff thought it would be fun to see what some of the teachers want from Santa Claus. Here are their replies: Mr. Gose, winning football team; Mrs. Lewis, A warm classroom; Mr. Roe, SNOW!!!!!; Miss Whitaker, 6 Million Dollar Man; Mrs. Thomas wants everybody to be happy; Mrs. Horn, peace, joy, and lots of dressing!

The Distributive Education Club of WHS traveled to London on Oct. 29, to tour the Kern’s Bakery.

Club members were guided though the plant and observed the many steps in the production of buns and bread.

After the tour, the 50 members stopped at the local Burger Queen and had lunch before returning to Whitesburg.