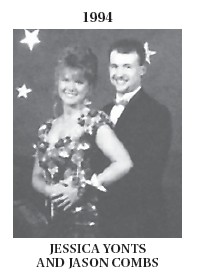 The 1993- 94 Junior- Senior Prom was held on May 14 at 8:00 p.m. at the Whitesburg High School gymnasium. The theme “We’ve Got Tonight” was enjoyed by all who attended. The night was filled with magic and excitement as couples posed for pictures and danced the night away. This year’s prom will be remembered as one of the highlights of the school year at WHS. The prom King and Queen were Jason Combs and Jessica Yonts.

President Mary Ann Soto; Vice-President Jessica Yonts; Secretary Melissa McIntosh; Treasurer Melissa Veneracion; Class Colors, Orange and Black; Class Flower, Carnation; Class Motto: “The value of life lies not in the length of days, but in the use we make of them.”

On the evening of October 1st Whitesburg High School held their annual football homecoming. As each young lady was announced and escorted on the field, the band played and the excitement rose. Everyone sat in awe, wondering who would be crowned the 1993 queen. As the minutes counted down they finally announced Miss Joanna Dixon escorted by Jonathan Pike will be crowned by Coach Doug Chandler as the 1993 WHS football homecoming queen.

The 1994 Yellowjacket pays tribute to an outstanding teacher and special friend. As a devoted teacher, she puts both heart and soul into her work and motivates her students with her abundant supply of enthusiasm. As our friend, she is always ready with a kind word and a helping hand. She brightens each day with her priceless sense of humor, bringing smiles and laughter to all those around her.

After graduating from Whitesburg High School in 1966, she received her B.S. and M.A. degrees from Morehead State University. She is sponsor of the Future Homemakers of America and has served as president of the Region 12 Home Economics Association. In her spare time she enjoys traveling as well as sewing, cross stitching, and collecting thimbles. She has served the students of Whitesburg High School with endless dedication for the past 23 years. In return for her gracious contributions to education and to all the lives that she has touched throughout the years, we extend our warm thanks and best wishes as we dedicate the 1994 Yellowjacket to Mrs. Kathy Napier.

This year, four teachers who have contributed over 125 years to educating students at Whitesburg High School are retiring. Jackson Banks, Jimmie Arthur, and Loretta Arthur are retiring from teaching math, and Joye Cassidy is retiring from her position as special education teacher. In addition to their teaching duties these four individuals sponsored such diverse activities as the Math Club, Youth Help Others, Tri-Hi-Y, and the Calligraphy Club. These teachers and their contributions will be missed by the students and staff of Whitesburg High School.