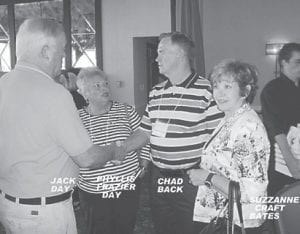 Merida Logan lettered three years in basketball and was captain his senior year. He played center offensively and defensively did a good job, coping with the biggest boys on the opposing team. His rebounding was excellent and his all around play has been outstanding. His unselfish attitude and fighting spirit will be greatly missed by his remaining teammates.

James Crase, a basketball player, a gentleman and a scholar. Lettered his junior and senior years. His mastery of the backboards, deceptive passing defensive technique, scoring ability and determination to win have gained distinction for him as being one of the outstanding Yellowjackets of the past 10 years.

Benita Collins Long was also a member of the class of ’54. She was a member of the WHS Marching Band, the Glee Club, FHA (served as state vice-president) and also enjoyed playing the piano. Her most memorable event was every day of high school and especially the band trips and the senior trip to Washington, D.C. 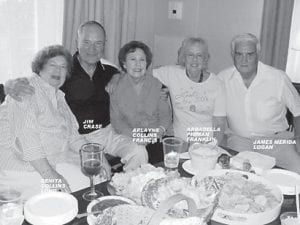 On August 13, 2011, there was a Whitesburg High School Luncheon held in Lexington, with over 100 in attendance. Pictured are (left to right) Benita Collins Long, Jim Crase, Arlayne Collins Francis, Arbadella Pigman Franklin and James Merida Logan. Jim Crase and James Logan were members of the 1954 basketball team.

Arbadella Pigman Franklin (Class of ’55), was a member of FHA her freshman year; the Glee Club four years; a member of the cheerleading squad for four years and the Pep Club her junior and senior years.

Phyllis Frazier Day (Class of ’65) was a member of the Nurses Club for four years, the Future Teachers Club and the Folk Dance Club her junior and senior years, the Pep Club four years and the Future Homemakers Club her freshman year.

Chad Back (Class of ’59) served as the manager of the football, basketball and track teams for all four years at W.H.S. 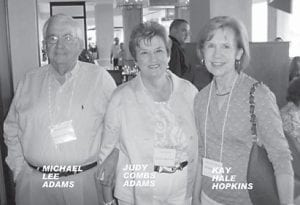 It pays to be educated! Every student in W. H. S. was required by the English department to write an essay on Soil Conservation. At an assembly program when the winning essays were read by senior Gay Profitt and sophomore Joella Craft, you could really hear a pin drop. Don’t you think that was because we were so well read on the subject that it was so very interesting to hear these winning essays? Thirty-five dollars in prizes was given. Prizes were awarded by Mrs. John Jordon in the assembly program. First prize of $3 to freshman Betty Lou Caudill; sophomore Joella Craft; junior Jean Sparks and Gay Profitt; Second prize of $2 to freshman David Collier; sophomore Harold Cook; junior Elizabeth Blair and senior Guinevere Crase. Grand Prizes of $10 to Gay Profitt and $5 to Joella Craft were also given.