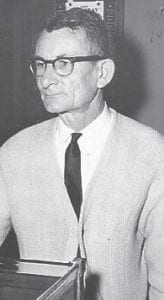 In 1929, after having lived in Paris and Maysville most of his early childhood, his family moved to Carlisle ( Nicholas County), where he completed his elementary and secondary education.

It was during this time that he became interested in sports and made quite a name for himself in his hometown as well as in the state of Kentucky. He lettered in football and basketball for five years. He played the positions of end in football and forward in basketball for the Carlisle High School ‘Musketeers,’ wearing a green and white jersey bearing the number 23. 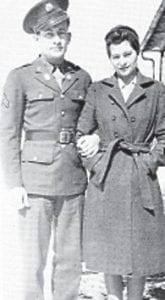 In 1936, he was awarded an athletic scholarship to Western Kentucky University to play football. After a few weeks, he was not really satisfied at this particular institution, and decided to join the Civilian Conservation Corps, where he served for two years. He was a medical attendant for the company with the rank of leader, which was equivalent to the rank of sergeant. In 1938, he enrolled at Union College, Barbourville, to further his education and to participate once again in athletics. He played for the Union College Bulldogs four years at position of end. He was selected as the captain of his 1941 football team, and listed in “Who’s Who Among Colleges and Universities” during his junior and senior years. He was named as class president of his freshman, sophomore, and junior classes.

His college education was interrupted in December, 1941, during his senior year with the bombing of Pearl Harbor. He enlisted in the United States Army in January of 1942, where he served in the States, Philippine Islands, and Japan with McArthur’s Sixth Army. He attained the rank of platoon sergeant. He returned to the United States and was honorably discharged Jan. 12, 1946. A total of four years and five days were spent serving his country. 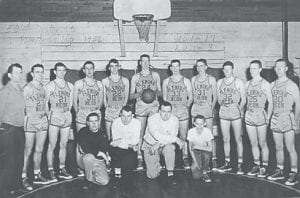 His first visit to the eastern Kentucky mountains was in 1938, when he came home with his college roommate (Kendall Boggs, his future brother-in-law) for a weekend visit. He loved the mountains and longed to return. However, it was not until 1940 that he returned again and was introduced to his future bride (a sister to Kendall’s wife) Velma Louise Sturgill. They were married on Dec. 12, 1942 at Whitesburg. He was now on his way to becoming the “mountaineer” of his dreams and being a part of the mountains, which had called him since seeing them for the first time.

He and Velma are the parents of three daughters: Faith Bowling, Ellen Welch and Georgia Hall, all of whom reside in Letcher County, and the grandparents of four grandsons: Ronnie Bowling, Jimmy Hall, Matthew Hall (stillborn), Stephen Welch, and granddaughter, Velanne Welch Blakemore. All are graduates of Whitesburg High School. They are great-grandparents of Chelsea and Tanner Bowling. 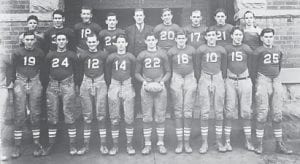 The 1935-36 Carlisle Musketeers. Mr. Armstrong is the fourth one from the left on the back row.

He began his teaching career in January, 1946 at Cumberland, after being discharged from the army. He taught history and biology and was a member of the coaching staff including football, basketball, and baseball. He sponsored the Safety Patrol whose duty it was to make the school surrounding a safe place for all. He was selected Teacher of the Year in 1949 while at Cumberland. He held this teaching position for 10 years.

In 1953, he graduated from Union College, Barbourville, after having returned for three summer terms to complete his education which had been interrupted in 1941. He received a B.S. degree with majors in biology and history.

In 1956, he accepted the position as head basketball coach and teacher at Fleming Neon High School. He also coached baseball and assisted in football. He had a very successful basketball season for the two- year period at Fleming.

His third and final teaching position began in 1957- 58 when he moved his family to a little community outside Whitesburg known as Little Cowan, his wife’s homeplace, and accepted a position as biology teacher at Whitesburg High School. During his 24 years at WHS, he has indeed been a very faithful servant in performing the varied duties expected of all dedicated teachers.

From the 1973 Whitesburg High School yearbook dedicated to him came these words which were written by a fellow teacher and very well expressed and certainly true of this individual:

To A Master Teacher — As he imparts living knowledge from the quiet pages of a textbook, as he provokes thinking in solving scientific problems, as he presents challenge in seeing the composition of living things.

To A Master Person — As he instills in his students the desire to be an asset to school, community, and country.

To A Master Friend — As he maintains a good rapport with fellow teachers and friends who appreciate and respect his wit and wisdom.

Mr. Armstrong retired from Whitesburg High School in 1982. He passed away April of 1995.