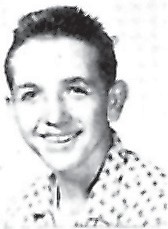 The Kat: Freshmen girls, just listen to this and then think about it. The Kat for the Month is a handsome little boy, who is president of the freshmen class. He goes out for both football and basketball. He is 5’8” and weighs 147 pounds, has brown hair and brown eyes. He is the son of Mr. and Mrs. Charlie Sexton of Whitesburg. His favorite drink is 7-UP. He doesn’t think! So you can see, girls, that this guy is starting to be very popular and what do you think he will be like when he is a senior! Billy Sexton.

The Kitten: The gal who is honored as the Kitten of the Month is brown-haired, green-eyed 14-year-old petite Cecelia Newsome, who is 4’9” tall and weighs 97 pounds. She lives at Millstone, where she attends Sunday school every Sunday at the Methodist Church. She is the daughter of Mr. and Mrs. William Newsome. Her favorite food, like most teenagers is hamburgers, her favorite drink is Pepsi. Her favorite color is blue. 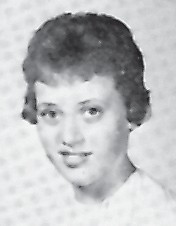 The Whitesburg Band and Whitesburg High School are very honored to have as our new band director, Mr. Charles Bickle, who was born in Louisville. He attended Shawnee High School and college at Eastern. He has his A.B. and M.A. degrees.

He is married to Barbara Issacs. They have a little girl, named Cathy, who is eleven months old.

Mr. Bickle likes photography and home movies. He would like to have music appreciation work.

In addition to all the good-looking, friendly, and courteous teachers on the hill, we have with us this year for the first time, Buddy Roe.

Mr. Roe, teacher of English III, is a graduate of Belfry High School and is now attending Pikeville College on Saturdays.

He had this to say about the faculty, student body, and the school paper. “They are just great and I love teaching here. I think the Black Kat is all right for a student publication, but I think we could have it a little more often.”

What football means to me, by Roger Day

To me football is the greatest sport a fellow can play. I think every boy should go out for football. If he doesn’t he is a ‘chicken.’ I have greatly enjoyed the past year and I wish I had 5 more years to play. One of the reasons I like football is the coaches. I think we have 4 of the finest coaches in Kentucky, not only the coaches are fine, but all the boys who play on the team are, too. When you get a good bunch of boys who really like football and like to hit, you can count on having a good team. You must also have the right attitude about the game. You can’t play a football game with your fist closed up. (Take it from me because I know). It is not always winning that counts, but the way you play the game. So I advise some of the boys to go out for football because they don’t know what they are missing.

We have a very good ball club, but we make too many mistakes during the game. Most of our games were lost on the basis of too many mistakes, such as fumbles by boys who haven’t learned their plays and who want to get in the game only to make mistakes. Also we received many penalties that were unnecessary in some situations.

We have had some injuries during games, and some boys have not been able to play. I think if all the boys get together and play a ball game without these careless mistakes we will win more games. Kenneth Frazier.

We don’t have enough boys to have a strong team. We had boys who could have helped us who quit. Stevie Stamper.

Too many mistakes are being made by young inexperienced players, and also not enough players are out for the enrollment we have. We have only 32 out for football from over 400 boys attending our high school. Pete Frazier.

I think the boys are just not doing their best. A lot of talk is going around that it is the coaches’ fault. I think that we have one of the best coaches in Kentucky. Wendle Sparks.

We just haven’t enough boys who will come out for football. Lynch played 26 men and we played only 12. Martin Lewis.

There isn’t enough cooperation among the boys. They all want to do something different. They should get together and plan out the plays. Billy Dean Adams.

I think the boys on the team don’t want to play football. Hiram Wright.

There is a definite lack of gridiron spirit in Whitesburg and W.H.S. Whitesburg has potentially the best ball team in the state, but when the school just doesn’t give a hoot, our potential just doesn’t help. It’s true too, that we have had tough luck in losing by small margins, some by only one point. I think in our future games, football and basketball season too, each of us should give our best and full support to our athletic programs. Ralph Dudley Webb.

Owen Wayne Wright has been chosen our Senior Profile. He has been outstanding all through high school. He has a B-average in all subjects. He is a very fine person and is liked by everyone. This year he is a member of the Science Club, Beta Club, and Hi-Y. He is the editor of the annual and is on the senior committee.

Three Nights a Week, Mary Gentry to John Clyde. Always It’s You, Roger to Fredia. Kiddeo, Ronnie to Connie. I Want to be Wanted, Stevie to Lorraine. Tell Me One More Time, Phyllis to Buck. Put Your Arms Around Me, Marsha to Carl. It’s Too Soon to Know, Nell to Paul. It’s Now or Never, Janice Bates to Bobbie K. I’m a Man, Kenneth to Barbara. Oh, What a Dream, Russell to Joyce. My Heart Has a Mind of Its Own, Charlotte to Danny. Love Me or Leave Me, Anna H. to Ray. Don’t Ever Leave Me, Patricia to Donnie. Let’s Dance, Hilda to Billy Wayne. I Want to Be Wanted, Billie to Ken. To Know Him is to Love Him, Francis to Henry. Lucille, Barbara to Roger. Blues Get off My Shoulder, Dorthy to Patrick. Save the Last Dance For Me, Tid to Brenda. Mission Bells, Steva to Larry. Lonely Teenager, Josephine to Owen. You Talk Too Much, Miss Adams to 2nd Period Study Hall. With You, Olivia to Herbert. All I Could Do is Cry, Rana To Benny. Am I Losing You, Nancy to Carlos.

David Combs; If you see someone walking around on the campus with a bag of money or a arm full of mail don’t think it is someone who has robbed or high school because it’s only David Combs doing his duty running errands for Mr. Burkich, Mrs. Polly, or Mrs. Day. He usually gets out of class when he wants to because he takes all our money to the banks, gets the mail from the post offi ce and does just about a dozen more things that are very important to Whitesburg High School. David is a person who doesn’t care to work. He doesn’t only like to do this so he can get out of class, but because it is an important task to our school.

We have a new librarian this year, a very sweet and wonderful person, Mrs. Don Brown, a certified librarian who graduated from University of Kentucky in Library Science. We are also fortunate to have an assistant librarian, Mrs. Kern Whitaker.