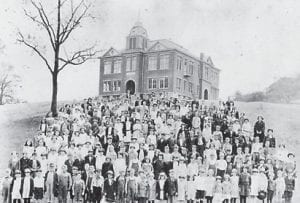 Students of the Whitesburg Graded and High School, 1922

School Column, Doings of the Freshmen

All over the state Friday, Oct.27, the schools will observe Temperance Day. Our school will give a program consisting of songs, etc., and we shall expect the parents to be present. High school will favor you with a song “Touch Not, Taste Not, Handle Not.” We will also wear above our hearts a bow of white, which signifi es temperance and purity.

Our room is doing splendid work this month. Everyone comes to school with well prepared lessons.

Next week is “Good English Week.” Freshmen will wear stripes of green ribbon. If you hear us make a mistake in our English, tell us and we will thank you. We will present a play, “Good and Bad English.”

The freshmen boys are making tie racks, matchboxes, etc., in manual training under Mr. Blair. The girls, under Miss Howell, are doing neat work in the sewing class. Soon the girls will give a drill in which they wear the dresses made by them in school. 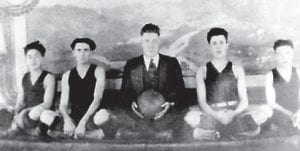 Come up and visit us, you’ve no idea what Whitesburg High School is doing. Lucy Ewen, Editor

Never in the history of Whitesburg have chances been brighter for a successful term of school. Prof. Harris and his able corps of teachers showed every mark of enthusiasm in beginning the term and the students who flocked to the high school building were exultant to the highest degree. Over 270 were enrolled in the various grades and it is believed that within the next two weeks over 300 will be in school.

As we have often remarked, Whitesburg’s school is its greatest and most important asset. What it accomplishes this year will not only depend upon its head, Prof. Harris, and his able faculty, but upon the parents and patrons as well. All must pull together and not separate and apart. Let harmony and hard work be the watchword every day in the term.

The Parent-Teachers Association will meet Friday night at the school building in the interest of a better school. Everybody is invited.

The grades are full to overflowing. The school is under good discipline. The pupils are of good deportment and are doing well in their studies.

Some fine players on the basketball team. They are being coached by Profs. Hale and Craft and some of the older boys. The chairman of the board, Mr. Burley Hale, joins in the games and shows the boys how to play. Charlie Blair is a “caution.”

Charlie Blair is making desk for the high school. Seventy-three have enrolled in the high school. They are a fine body of Letcher County boys and girls. They are in charge of Prof. Harris and Misses Earle and Harris, three teachers. Thirty are from the country. We hope to see still more.

Prof. Harris is arranging to receive any of the rural teachers who may wish to pursue high school work after their sessions close. These teachers, by keeping up their studies can fall into line with our pupils and make their credits, and stay in the profession. They should do this because their county needs them. They can do their work when no other people can.

Commencement week dawned early Monday morning with May breezes flaunting over the landscape and birds singing in the leafy green. White clouds, lighthearted and flecked in sunshine, frolicked over blue skies now and then throwing threatening shadows over the enticing grounds. The principal of the school and his excellent helpmate, Mrs. Harris, with all the teachers were full of activity.

(The above article from the May 18, 1922, Mountain Eagle.) Whitesburg High School’s first male basketball team

According to Mrs. Inez Williams (daughter of Charlie Blair), her father served as the first boys’ basketball coach for Whitesburg High School. She also said that he and his players came up with the name “Yellow Jackets” as the school mascot and “Orange and Black” as their school colors.

Mr. Coy Morton, who knew Coach Blair, also told me that he was the first coach as well as the janitor and truant officer. Coy confirmed what Mrs. Williams had told me about the mascot and colors being selected by Coach Blair.