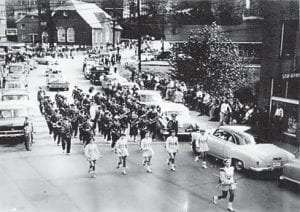 Dr. Hugh Adams and his Whitesburg High School music program covered almost 20 years and had a tremendous influence on music education in Letcher County. His concert bands were very accomplished and gave many students a broad music exposure. He also was the choral instructor at the school.

Hugh Adams began as band director in 1937 after graduating from Georgetown College. His tenure was interrupted by service in military bands during World War II, but he returned to Whitesburg after the war. As a result of his military contacts, he was able to acquire a wide array of surplus instruments from the government which proved to be a great asset to the music department as most colleges didn’t have such items as bassoons, e-flat clarinets, bass saxophones and other unique instruments which were available to WHS students and served their needs for many years. Hugh Adams developed the musical abilities of his students very capably until he left Whitesburg in 1953. 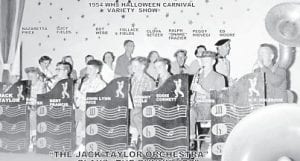 This is the only known photo of the Whitesburg High School “stage band”, taken at the 1955 Halloween Carnival at WHS when the group is shown playing “The Bunny Hop” on stage at the old grade school auditorium with some local townspeople dancing the “Hop” in the background.

Another influential band director followed Hugh Adams in early summer 1953. And, in only two years, 26- year old Jack Taylor made a mark on the Whitesburg band program as well as a lasting impact on his students.

Jack Frazier Taylor was raised on Pond Creek (near Belfry) in Pike County. His mother, Mayme Frazier Taylor, was a Whitesburg native and had and many friends in Letcher County. He had been a band member during his grade and high school days at Belfry. Jack attended UK for a year and served in the U.S. Air Force. After the death of both parents, Jack had the responsibility for his younger siblings, Jim and Joe (twins) and Truman Taylor. The younger Taylor boys were sent to Kentucky Military Institute so Jack attended the University of Louisville for a year, and he picked up college credits in summer school at the University of Kentucky. Anxious to try being a band director, Jack began to look for opportunities where he might develop that interest.

That spring, Jack saw an announcement on a bulletin board at UK that Whitesburg High School was in need of a band director and Jack called Jesse Lewis, a friend of his late mother, to inquire about the job. She advised him to come up there and she would introduce him to the superintendent of schools. So Jack drove to Whitesburg in his sporty new 1953 Packard, Jesse Lewis took him to see Supt. Dave L. Craft (who was working in his yard) and after a 30-minute interview, Jack was hired.

Jack Taylor immediately recognized the music abilities and talent of the graded and high school students, who, as a result of Hugh Adams’s efforts, were good concert musicians.

Jack’s goal was to expand those talents and to organize them into a band unit in the pattern of UK’s “Marching 100” and other top marching bands.

Jack found that the instrument inventory was excellent. However, the blue and gold uniforms were worn out and not in the school colors. His first successful effort was to organize band parents, businesses and other local school supporters to pay for new uniforms with the school colors, i.e., orange jackets with black trim, military belts and black pants with a stripe.

Jack then chose half a dozen younger band members whose parents could afford to pay their way and would allow them to go 200 miles away with this new band director to participate in Male High School’s band camp near Louisville for a week’s marching training. On their return, he used these trainees and his own cadre of instructors (including his brothers Jim, Joe and Truman who were home from KMI) to have his own WHS band camp.

To fill the marching needs and supplement the good musicians, Jack recruited new band members with marching ability being the primary need and music ability being secondary in some instances. Music rehearsals began the day. Then came the “foot stomping” marching sessions at the football field which, in the dry July weather, raised dust clouds over the field. The pace was a brisk 160 beats per minute.

Once the basics of marching in straight lines and columns as well as timing were taught, and then marching routines were directed toward a smooth, gliding step without the head-bobbing motion. Jack Taylor often lost his voice from yelling that lines were not straight or properly spaced, a must in his program. He was a rigid disciplinarian and soon had his group of high (and some grade) school musicians ready to go.

The fall term started and the first home game was near. The WHS Marching Band was better, but still not yet where Jack wanted to be. That arrival of the new uniforms was to be the finishing touch. On the day of the game, the new band uniforms didn’t arrive until almost game time. At the band room, the members hurriedly dressed and loaded onto the buses for the game, arriving just prior to kickoff.

Jack Taylor wouldn’t let the band off the buses until it was time for the pre-game show and the playing of the national anthem. Hidden behind the buses, the band fell into formation and to the surprise of everybody, came marching onto the field in their new uniforms to the tune of “On Wisconsin”. The crowd stood and cheered the band as never before.

The entire school community was proud of what had been accomplished in such a short time. The hard work and dedication of the director and band members, and the strict discipline that Taylor demanded on and off the field, had resulted in a trained group of musicians in a marching band was ready to perform. Throughout the fall season, the marching band improved. During the winter season, concert music was not neglected, but priority was for WHS to have an excellent marching band of competition quality. Jack Taylor would not accept mediocrity and he instilled that same pride in his band members.

By the summer of 1954, Jack Taylor had arranged for the approximately 60 members of the band to attend band camp at Pee Wee Valley, near Louisville. Male High School Band Director Roy Boser was a nationally known band director. That summer camp experience and training for the WHS band with what may have been Kentucky’s best high school marching band at the time (Male High) paid off.

By the fall of 1954, Jack Taylor’s WHS Marching Band was known throughout eastern and central Kentucky as a championship band. Competition at the Big Sandy Bowl festival gave the WHS band a first place rating. In fact, it has been told that when Gomer Pound, the Morehead State University music professor who was primary judge of the band competition, had Jack Taylor approach the award stand, he asked Taylor if he had rather have the “music” award or the “marching award” as the WHS band was best in both categories. Jack Taylor chose the marching trophy!

The band traveled to music festivals and competition in Pikeville, Prestonsburg, Harlan, Corbin, Middlesboro, Lexington and other places and always ranked at or near the top. They never turned down an opportunity to display their talents at any parade. The band became the pride of Whitesburg and its surrounding school feeder communities. The half-time shows at football games were at the highest level of band entertainment. Every famous march, including “The Thunderer”, “St. Louis Blues March”, “Washington Post”, “Semper Fidelis”, “Colonel Bogie” and other Sousa marches were regular parts of the band’s repertoire. But, Jack’s bands also performed on the field and in parades such professional routines as “Brass Band Boogie” and “ Over The Waves”, a patriotic medley of well known tunes, as well as other shows written and directed by Jack Taylor himself. In those days, few bands did directional marching routines in parades and shows, particularly to the rapid pace that the WHS band performed. And, the majorette corps, led by Drum Majorette Phyllis Hall, won their own awards as being the outstanding group in the area.

This story of Jack Taylor and the Whitesburg High School Marching Band will continue next week in The Mountain Eagle.